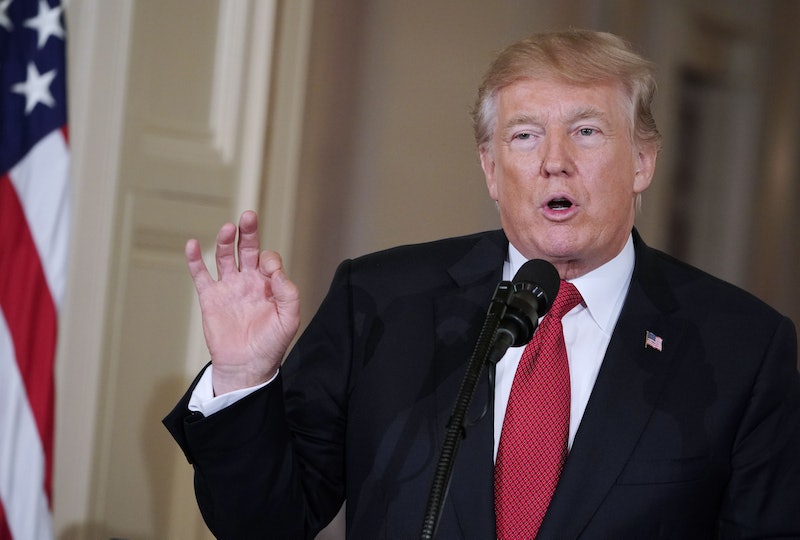 Having failed to repeal the Affordable Care Act through Congress, the Trump administration has now started taking aim at the law's various pieces in other ways. On Thursday, it announced that it would no longer pay the cost-sharing reduction payments (CSRs) that specifically help low-income Americans get health care, a move that many think will throw the insurance marketplace into chaos. Beyond that, though, Trump's Obamacare subsidies halt directly targets women — specifically the low-income women, who make up an inordinate percentage of the nation's poor.

These subsidies, which Republicans have argued are an unconstitutional use of government funds because Congress never authorized the use of the money, go directly to insurance companies who are insuring people who can't afford the plans they buy off of the ACA marketplace. If the insurance companies aren't guaranteed to receive the government money, they could pull out of the marketplace, creating a very unstable situation. Many insurers had already made their plans more expensive in anticipation of such a plan, which means that low-income Americans are already at a disadvantage in an insurance market that was supposed to help them as much as possible. Politico reported that Congress could turn around and appropriate money to continue these subsidies, thereby avoiding the potential political fallout, but there's no guarantee that that will happen, especially in a Congress that has been so ineffective at passing meaningful legislation so far.

NPR reported that the people who benefited the most from these subsidies were those making 100-250 percent of the federal poverty level, which is in itself a misleading statistic. In 2016, the stated poverty level for a single person was $11,880. When you take into account real costs, though, a person making that or even double that — especially if they have a family to take care of — will still be struggling financially. These CSRs were essentially a lifeline for the people who qualified — people who weren't benefiting from Medicare or Medicaid, but who still wouldn't have been able to pay for any of the plans that were offered without a government subsidy. They could use refundable tax credits to pay for their premiums, giving them access to health care that otherwise would have been unaffordable.

And across the board, there are more low-income women than men in almost every state. One in three single mothers lived in poverty in 2015, in addition to one in five children — half of whom lived in a household with a single mother. While those living in what the government classifies as poverty won't be affected by this change, those rates still give a good indication of how changes to benefits for low-income individuals affect more women than men.

Medicaid has strict requirements for eligibility, and not qualifying for Medicaid doesn't necessarily mean that the individual in question would have been able to pay for their insurance out of pocket. That's where these CSRs come in, and the people who will be most affected by Trump's most recent decision are the ones who were right on the border — not eligible for Medicaid, and also not able to pay for their own health care at the normal market cost. Extrapolating from the national poverty rates, that group will have a larger percentage of women, particularly women of color. The Trump administration claims that the CSRs were "unlawful payments" and "[bailouts] of insurance companies," but they were actually helping low-income Americans more than they were helping insurance companies — and that's exactly who will suffer if the payments stop.