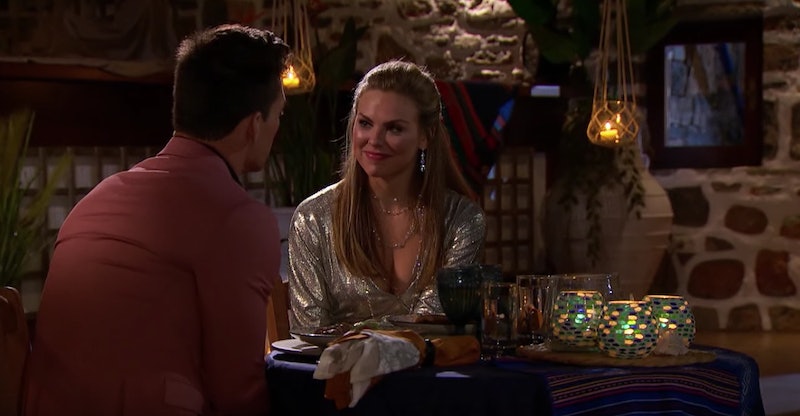 Monday night's episode of The Bachelorette had a cloud looming over it from the very start. Fantasy Suite dates are meant to be peaceful, intimate, and helpful for the lead to get clarity on which men she really sees a future with. But as viewers knew from season previews, Luke P.'s Fantasy Suite date with Hannah wasn't going to end well. And what's unfortunate about that — aside from, well, everything he said — is that Luke P.'s date overshadowed Tyler C.'s Fantasy Suite comments, which were just as important — if not more so — to see.

During Hannah's one-on-one with Tyler, she explained to him that while they clearly have a physical connection, she wanted to spend their overnight date exploring each other's hearts and minds a little bit more, not having sex, to make sure their emotional connection could be on an equal level. Tyler was immediately understanding, and told her that he respected her boundaries, wanted her to be comfortable with anything they did, and would never pressure her into anything.

This is a stark contrast from what we later saw with Luke P., who, though doing essentially the opposite of pressuring Hannah into having sex, was still claiming ownership over what she chooses to do with her body. He told her he'd want to end their relationship if she'd had sex with any of the other men, because — despite "chasing sex" in his past — he's since recommitted himself to Christianity, and believes the "marriage bed" should be kept "pure." This wasn't a two-way conversation about whether or not their views aligned, it was Luke P. telling Hannah what standards he expects her to abide by, and insinuating that she'd "slipped up" and fallen short by not meeting them, even if he later backtracked and said they could work through it.

Both of these conversations warrant further discussion, but less than 24 hours later, Luke P., not Tyler, is who most people are focusing on. This is notable because The Bachelor/ette has long given a platform to problematic men like Luke, and after watching him gaslight and manipulate Hannah — as well as the other men — all season, we've long known that he's toxic. We've also literally seen most of his Fantasy Suite date conversation with Hannah play out in season previews for weeks. Nothing about seeing it air in real-time was new or surprising.

What we've seen less of on The Bachelor and Bachelorette, however, is healthy conversations about sex and boundaries like Hannah and Tyler's. Aside from the time Bachelor In Paradise held a cast-wide forum about consent after the Season 4 controversy, if these kinds of talks happen, it's usually in the Fantasy Suite behind closed doors. But because Hannah has been so candid about sex, we were able to see her and Tyler discuss it open and honestly on camera. Should we praise Tyler for simply being a decent, respectful dude? Not necessarily. Should we do so on a show like The Bachelor, which has too often rewarded toxic masculinity with screen time? Absolutely.

It's important to dissect why Luke's behavior is toxic, particularly because, judging by his mentions, many people falsely see it is an extension of his faith. But that shouldn't take any of the focus away from the fact that, for one of the first times, we got to see a healthy, mature discussion about sex on the show. And frankly, men like Luke P. don't need any more of our attention.