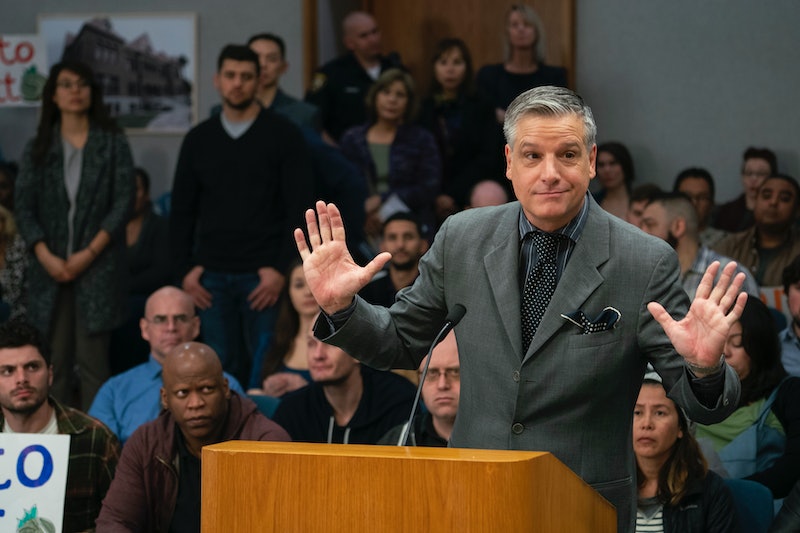 Spoilers ahead for Veronica Mars Season 4. It's been a while since the families of Veronica Mars were in our lives, and the various crimes that follow them around. Why was Richard Casablancas in jail on Veronica Mars? "Big Dick" is not one of Neptune's better dads, but he's back on top in Season 4.

One charming addition to the Season 4 cast is (newly re-minted) J. Jonah Jamison himself, J. K. Simmons! The Whiplash star plays Clyde Pickett, Big Dick's BFF from their time doing time on the inside. While Veronica investigates a series of bombings in Neptune, Big Dick and Clyde are on their own mission to change the town in their image. This dynamic duo has actually known each other for a while. Richard turned himself in at the end of Season 3, and served a year in prison after one last summer with his son and namesake, Dick. That summer vacation isn't as fun as it could be, but we'll get to that in a minute.

What exactly did Big Dick do? Some white collar real estate cons, basically. His company was fooling investors with illustrations of properties that did not exist. Veronica uncovered the scam at the beginning of Season 2. In true melodramatic Casablancas family fashion, Big Dick ordered his employees to shred their paperwork before fleeing the country by helicopter. His third wife Kendall, played by Buffy The Vampire Slayer and Angel star Charisma Carpenter, was also a con artist, and was ultimately killed in Season 3. The Casablancas family truly cannot catch a break — but hey! At least he got Clyde.

That said, Kendall and Richard's illegal behavior is nothing compared to Big Dick's youngest son, Cassidy "Beaver" Casablancas. First of all, Cassidy is also the one that hired Veronica to investigate his family so that his father's criminal activities were exposed. That revenge plot was suspicious from the start. Then, Veronica discovers that he raped her at a party, murdered the man who sexually assaulted him when he was a child, and killed a bus full of Neptune High students. After that, Cassidy died by suicide.

Dick Casablancas Jr. is the only one in his family, it seems, to have avoided criminal activity. He's more of a lovable dummy who is sometimes in the wrong place at the wrong time and obstructed justice maybe once. In Neptune, that's the same as jaywalking. However, Dick and his dad bullied Cassidy so much when Cassidy was younger that by the time Big Dick returns to turn himself in to the police, their relationship is strained by guilt over how Cassidy grew up.

By the time Season 4 rolls around, Big Dick and Dick Jr. (stop your snickering) seem to be in a better place. Going to jail may have only encouraged his shady ways, but at least the Casablancas family has done some necessary healing. He did his time, made some friends, and is as much of a friend to Veronica and Keith Mars as he is an adversary.