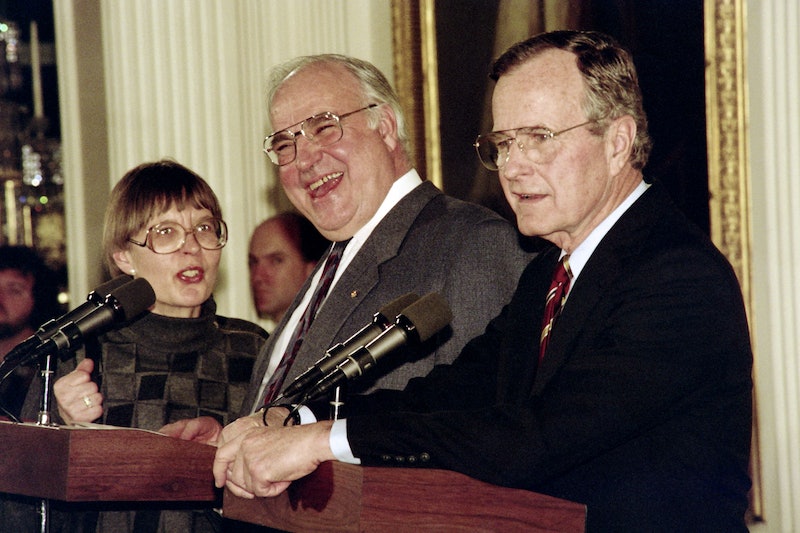 Early on Wednesday morning, local media reported that the oldest living former president had been admitted to a Houston-area hospital . He's just fine, but why was George H.W. Bush in the hospital? As of now, the public doesn't know. More information is expected to be released later Wednesday, but for now all that's known is that Bush, who is now 92, is in stable condition and "doing fine," according to his office chief of staff Jean Becker. Update: On Wednesday afternoon, a spokesperson for Bush said that the former president had been admitted to the intensive care unit to address respiratory complications stemming from pneumonia.

The reason that his diagnosis or information about his ailments hasn't been shared is perhaps that the doctors don't know themselves what's wrong. The Houston Chronicle reported that his medical staff at Methodist Hospital at the Texas Medical Center in Houston has "a couple of theories" about his condition, which implies they're still figuring it out. That said, he is also responding to treatment so there's no reason to worry about anything too serious. Given his age there could be a large number of causes.

He has had a fair number of health scares as he has gotten up there in age. The first major one was in 2012. He was hospitalized briefly for a persistent cough but then discharged. It then became a rather serious bout of bronchitis and Bush went back to the hospital after Thanksgiving. Initial reports pointed to another quick discharge, but he ended up spending nearly two months in the hospital, much of it in the intensive care unit with the doctors worried about the possibility of pneumonia.

Then in late 2014, Bush was hospitalized again for respiratory issues — this time a shortness of breath. Doctors said the hospitalization at the time was just an abundance of caution, but he ended up being there for more than a week. His condition never worsened, however, and he was released in good health.

The most serious health issues he has had were the result of a fall in 2015 at the family's Maine home. He ended up breaking a bone in his neck and has been largely bound to a wheel chair ever since. That said, his recovery went pretty well. He fell in July and was throwing the first pitch at an Astros game by that fall.

He has been out of the public eye for the most part, but he does make the occasional appearance. Astros games are a favorite — he threw out the first pitch again this April — as well as political remembrances like the one for the 75th anniversary of the Pearl Harbor attacks this December at the Bush Library. He attended alongside former Republican Sen. Bob Dole.