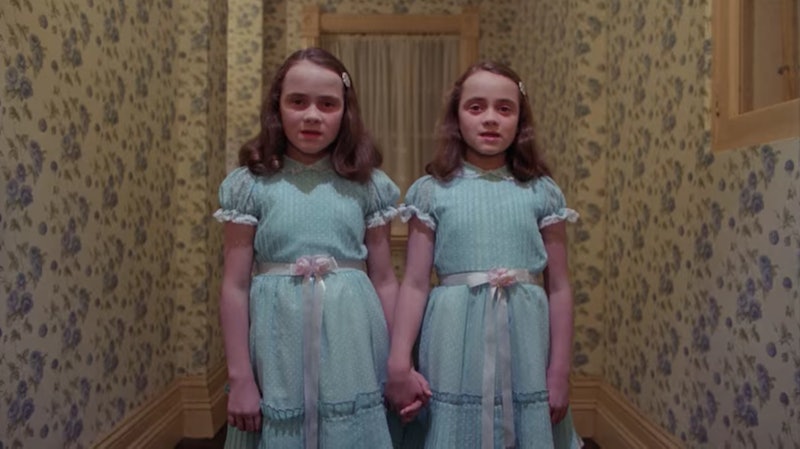 It all started when I was four and watched a single episode of Scooby-Doo. In the one I saw, a mummy chased the Scooby gang around a crypt, and I subsequently couldn’t sleep for weeks. I was arguably too young to be watching the spooky cartoon, but my response was still pretty drastic. My parents soon realized that they had an extremely sensitive child on their hands and forbade me from watching the animated series again. I continued to avoid scary things for about 20 years, but now, watching horror movies is therapeutic for me.

Growing up, I had the unfortunate combination of being both extremely anxious and a chronic insomniac (0/10, would not recommend!). I often had night terrors, and my sleeping problems were only exacerbated by things I’d seen onscreen. After The Phantom Menace came out, Darth Maul became my fixation for several months, and I’d picture his horns, striped face, and glowing eyes for hours every night. "It's just magic marker!" my dad would tell me jovially, but it didn't help. Then, after watching The Fellowship of the Ring in fifth grade, I had to sleep in my older brother's room for months (much to his extreme chagrin) because I couldn’t stop thinking about the orcs.

I was curious if there was science to back up the way that horror movies exacerbated my anxious personality, so I reached out to Dr. Ali Mattu, an Assistant Professor of Medical Psychology in Psychiatry at the Columbia University Clinic for Anxiety and Related Disorders. After I share my tale of childhood woe, he assures me that I wasn't alone.

"The younger someone is, the harder they have separating what happens in a movie versus real life," he explains. "So we know kids are much more vulnerable to scary movies, and it's much more likely to live on in their mind and lead to real fears."

And since these films did lead to real fears for me, I rarely participated in the genre. The few times I did, I more than paid the consequences. After watching The Village in ninth grade — yes, the M. Night Shyamalan thriller with a Rotten Tomatoes score of 43 percent— I would check my bedroom for anything red (the "bad color," if you will recall) every night for a full six months. I knew intellectually that it was ridiculous, but silly fears have a way of becoming much more real at night.

However, things slowly improved as I grew up. In college, I realized that I had an anxiety disorder and began going to therapy and taking medication. I was sleeping much better, and life went on. I graduated college, got married, and avoided scary movies at all costs. Then, a few years ago, something strange happened. I decided to watch The Shining. At night. While I was home alone.

As I hit play, I feared that it would be a mistake — that I'd be subjected to weeks of nightmares. Except I wasn’t. Sure, Jack Torrance was creepy, but the film didn’t latch onto my psyche like so many others had. Likely because of my medication, I was able to separate reality from fiction and categorize both accordingly.

And so I began slowly dipping my toe into the genre, watching many of the classics people my age had already seen — Halloween, Rear Window, Friday the 13th (Parts 1 and 2), The Thing, Psycho, A Nightmare on Elm Street, Rosemary’s Baby. I also became acquainted with newer ones, like The Conjuring, The Witch, It Follows, and The Babadook. Then there was David Lynch's body of work (that jump-scare in Mulholland Drive was rough, I won't lie). And while there’s been the occasional misstep (I listened to Christian praise music all night after watching the It remake last year), most of the time, the credits will roll as I wonder what the fuss was all about.

In fact, watching scary films has actually become something of a hobby for me. My husband dislikes horror and doesn't participate, but every once in awhile he’ll hear blood-curdling screams coming from the TV and know I’m at it again. And this is where the therapeutic aspect comes in. Although my anxiety has become more manageable, my worries still become unruly, like an invisible form of elephantiasis (which I was convinced I had just months ago). I become fixated on specific things, like a relationship or my job performance. And while these worries aren’t extraordinary, my responses to them often are.

This happens to me on and off, but when it does, scary movies are a balm — a way to keep me tethered to the ground, so I don't float away on thought bubbles. Horror forces me to realize how much worse things can be, and my own obsessions become trivial by comparison. "Hmm, I wonder if this person’s mad at me," I’ll think. "NO TIME — JASON VOORHEES IS ON THE LOOSE!" my TV will respond. In this way, I am able to crawl out of my head for 90 minutes or more.

So, I ask Dr. Mattu if my watching-horror-movies-to-cope method has any kind of medical backing. While none of his patients have done what I'm doing, he understands my motivations. "One of the advantages of a scary movie is not only do you get absorbed in the film, but it can activate your body in a similar way as light exercise can," he explains. "And for a lot of people who struggle with worries, doing something that helps you to get out of your head and get your body active is a great way to tolerate that stress."

In addition, he says that what I'm doing sounds like distress tolerance, which he describes earlier in our conversation as "finding a way to better tolerate the fear that you're experiencing by distancing yourself from it, creating different emotions, [and] engaging your nervous system in a different way." The clinical psychologist also points out that these movies likely give me a different perspective on my anxieties, which seems accurate to me. "It sounds like it helps you to make them much more tolerable — like tolerating that uncertainty," he theorizes.

In fact, he explains that watching horror movies can be a form of exposure therapy. "Scary films are really the only thing that we can access all-year round that allows us to experience fear in a controlled, safe way," Dr. Mattu says. As a result, this can help people understand how they respond to fear and become more comfortable with those sensations. "The beauty of movies is you can watch it again," he points out. "When I work with people who have a fear of clowns, we'll watch certain scenes over and over again until people sort of become bored of it."

That being said, different things are scary to different people, and since there are so many movies, shows, and books out there, it's easy to become spooked — even accidentally. So what if you watch something that proves to be too scary? For one, Dr. Mattu says that it's perfectly normal for those thoughts to linger. He recommends not to avoid thinking about them, because that often makes you dwell on them more. He also recommends talking to someone to help process those thoughts, whether it be a friend, significant other, or therapist.

What's more, Dr. Mattu suggest re-experiencing what scared you in some way. "[That] doesn't necessarily mean you have to rewatch the whole thing," he clarifies, mentioning that seeing a behind-the-scenes video or interview with the cast members can help dismantle that constructed reality. Additionally, humor can be a coping mechanism. "It's totally okay to watch an episode of How I Met Your Mother so that your mind is in a different state," he says, "so you're laughing and undoing that anxiety."

I'd certainly choose laughing over screaming any day, and this horror hobby does not eschew my need for therapy. While I might experiment with scary movies every now and then, it's by no means my favorite genre. I still prefer Ben Wyatt over The Babadook, Gilmore Girls over the final girl. Yet, I do now love watching people go into dark rooms when they should clearly run outside and call the police. I'm safe on my couch, after all, and my mind is — ironically — at rest.

More like this
Austin Butler Confirms Vanessa Hudgens Pushed Him To Do 'Elvis'
By Alyssa Lapid
Jennifer Coolidge Hunted For Jewels & Lashes In J.Lo’s Hotel Room
By Jake Viswanath
Owen Thiele Asked Sundance Attendees About Films That Don’t Exist
By Grace Wehniainen
Keke Palmer Shares The Sex Of Her & Darius Jackson's Baby
By Jake Viswanath
Get Even More From Bustle — Sign Up For The Newsletter
From hair trends to relationship advice, our daily newsletter has everything you need to sound like a person who’s on TikTok, even if you aren’t.