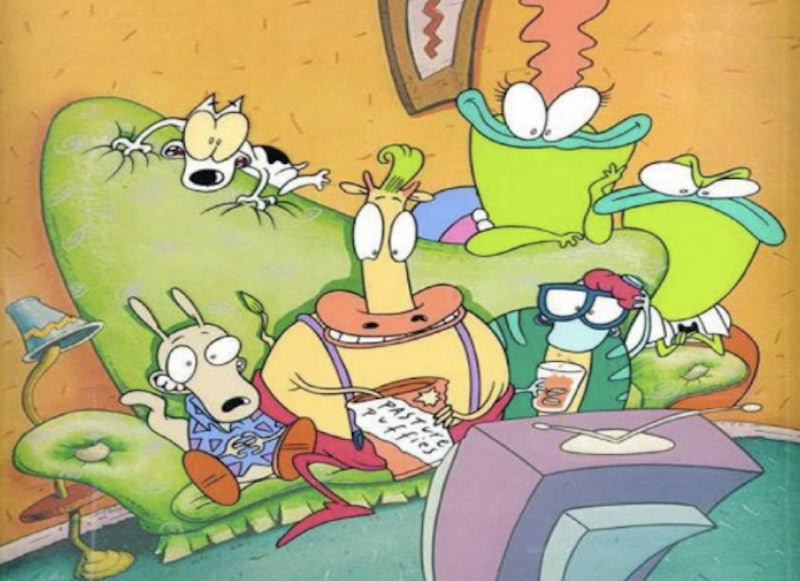 The year was 1993. Everyone's mom was obsessed with Tom Hanks and Meg Ryan's Sleepless In Seattle romance; Ryan Gosling and Justin Timberlake were tweens on The New Mickey Mouse Club; and Rocko the wallaby was working as a sex line operator on a kids' TV show. Oh baby, indeed. Rocko's Modern Life will finally return to Nickelodeon in 2018 with a TV movie, and with it, the series plans to bring the unique brand of sneaky adult humor that has stuck with so many '90s kids who were raised on the cartoon series.

"I'm going back and forth between the Nickelodeon special [and a project at PBS], and I run back to the PBS studio where we get notes like 'I think this might be too aggressive' and it's nothing — over at Nickelodeon we're doing nipples of the future," says Rocko creator Joe Murray when we speak at San Diego Comic-Con, later adding the promise that the new Rocko movie is anything but watered down from the original's brash tone.

He and voice actors Carlos Alazraqui (Rocko himself) and Charlie Adler (Mr. and Mrs. Big Head) are working on the series' revival, but for the moment, they're nestled on a giant, bulbous, orange couch in Nickelodeon's Comic-Con press suite. It's the perfect setting for a discussion about cartoon nipples and that time Rocko's eyeballs were used as a metaphor for his testicles.

Rocko's Modern Life was certainly a divisive show, with heavy innuendos (usually not lost on the parents in the room) landing the series in a two-series genre with the very adult Ren & Stimpy. But according to Murray, eventually, the censors got wise and he and his team had to be sneakier.

"Usually they were micromanaging what they were looking for," offers Adler — apparently they couldn't say "stupid," but eyeballs as balls made it through. "You could be very subversive. Once you understood their mindset, you could go all the way around them."

Of course, Murray and Co. exploited these weaknesses once they figured them out. Murray recalls an episode that called for a chicken restaurant almost begging to become a dirtier version of the original script. "We called it Chubby Chicken or Chewy Chicken," says Murray, already laughing at where his story is going. The network told the team they couldn't use the name, "so as a joke I said 'What about Chokey Chicken." Apparently, that was totally OK.

But the show not only hid sex jokes in plain sight, it offered up visceral images at every turn — images of despair, visible butt cracks, and vomit ran rampant in the 22-min episodes. Kids watching the series, whether they realized it or not, were introduced to extremely adult situations at an early age — just in a quirky, colorful package.

"If you're taking an adventure with a 20-year-old and you're a kid, you're going to be forced to be a little more mature to try to follow it," says Alazraqui, who adds that Rocko was the ultimate underdog. This 20-something down-on-his-luck, nearly-cuddly wallaby was impossible not to root for, but his life could get rather bleak sometimes, whether he was losing a job and learning that the real world is ready to chew you up and spit you out, or he was becoming literally hypnotized into a consumer zombie by the ads on his TV.

"I was pulling from when I went out into the world, that transition phase and trying to do adult things," offers Murray, speaking to the early days of Rocko's Modern Life. "I would hope that when you get to that transition stage — and the kids are getting there earlier and earlier — that they start to say 'Oh, I remember that that when Rocko felt that way and maybe it's OK that I feel like that. Maybe this angst that I'm feeling is normal.'"

"He was very Pooh-ish, very zen," adds Alazraqui, referring to a much tamer cartoon character, Winnie The Pooh, and his positive outlook on life. "[Rocko] always ends the day with, (switches to Rocko's voice) 'Well, I guess it was a little bit scary, but I think we should go forward.'"

And for the '90s kids who made it through watching Spunky the dog eating Rocko's literal brain off the ground in the opening credits every single week, I'm pretty sure walking through life and all its disasters with a similarly chill disposition is, well, a no-brainer.