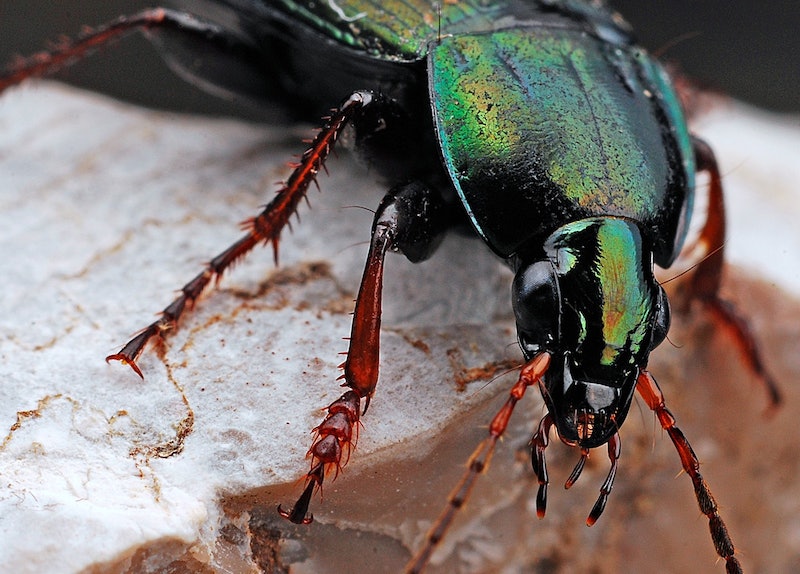 I'm afraid of bugs; the kind of irrational fear that makes me scream as if I am being attacked by Freddy Krueger instead of attempting to squash a spider. I have often asked myself why I am so scared of something so tiny. According to science, the real reason you're afraid of bugs might be because your brain is confusing disgust with fear. Hmm. I'm not so sure about this. There are many things I find disgusting that I am not afraid of, like vomit for example.

For me, I think my fear of insects stems from the loss of control I feel when I see them and then imagine them crawling on me. But, hey, let's see what this science says. According to the website Science of Us, the fear of bugs is not uncommon. It's so widespread in fact that there is an entry in the DSM-5 for an extreme fear of insects — entemophobia, which I am pretty sure I have.

Additionally, a 2016 survey by Chapman University found that 25 percent of respondents listed insects as a genuine fear, more than the number of people who reported fearing becoming the victim of a violent crime, germs, or even dying. I can relate. However, some scientists say that what we perceive as fear is actually disgust, which can evolve both culturally and biologically.

A few weeks ago I squashed a wolf spider with the butt end of a foam roller. While the spider was dead, tons (hundreds perhaps) of baby spiders sprayed in every direction. Because my roommate was asleep I resisted the urge to scream with every fiber of my being. When I told her about the incident the next morning she said that wolf spiders carry their young on their backs, like baby-wearing for spider moms. I was appropriately horrified as I imaged hundreds of baby spiders scattering around our house. And, if I'm being honest I guess I did find the notion a little disgusting.

"Disgust is shaped in part by culture, but it also has its roots in biology, and the rejection response, like fear, is a mechanism designed to keep us safe: We’re disgusted by feces and rotting food, for instance, because each has the potential to make us sick," Cari Romm wrote on Science of Us. "Along those same lines, the presence of insects often indicates that something isn’t safe to consume or touch. Over time, we’ve come to associate the messenger with the threat itself."

The conclusions are based on research from Paul Rozin, professor of psychology at the University of Pennsylvania. Rozin explains that specifically in American culture, bugs are seen as disgusting whereas in other cultures they are help up as delicacies.

"Every culture eats something that other cultures find disgusting," Rozin said on BugsFeed.com. "Like cheese — it’s rotted milk. In some cultures, that’s disgusting.”

If I hadn't been socialized to think bugs were gross, would I be more likely to try eating them? Maybe at the very least I'd be less terrified of seeing them. While I will admit to participating in a Impala dung-spitting contest in South Africa, I know with 100 percent certainty I would never make it on one of those reality shows like Fear Factor that always seem to involve eating bugs, or letting them crawl all over you. It doesn't matter if the prize was $10 million. I, hands-down, would not be able to do it.

"It's hard to imagine civilization and culture without disgust, the sense of what's inappropriate," Rozin said in an interview with Penn Arts & Sciences. "If you could imagine a person who is free of disgust, it's sort of hard to imagine how they would be distinctly human. It's got to do with the modern sensibility; it is the — the — sign of civilization."

So, now I'm pretty sure I am not only afraid of bugs, but I also find them utterly disgusting. Why do I have to choose either fear or disgust? I'll take both. Because, bugs. Gross.