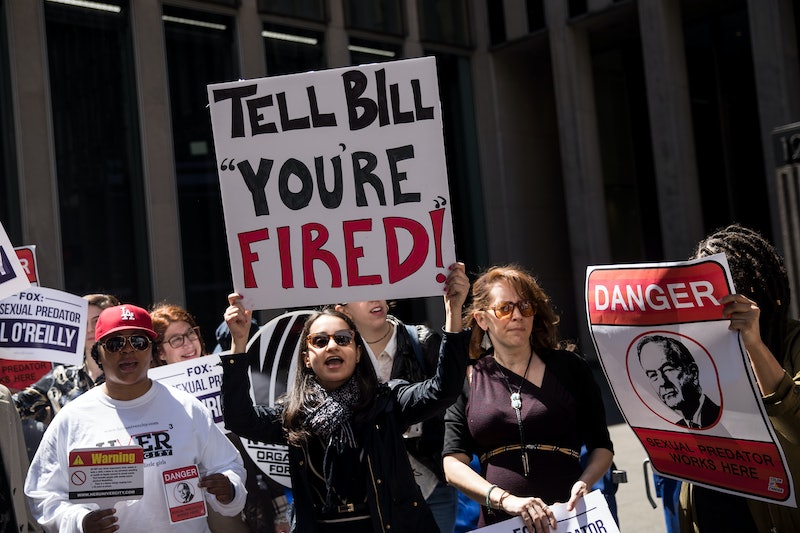 On Wednesday, 21st Century Fox, the parent company of Fox News, officially announced Bill O'Reilly would be leaving the network after allegations of workplace harassment and the network's handling of them were the focus of an April New York Times report. O'Reilly is the second Fox News figure to be publicly accused of sexual harassment and other inappropriate behavior in recent months: former Fox News CEO and Chairman Roger Ailes stepped down last fall after harassment allegations against him were also made public; he has repeatedly denied them as has O'Reilly denied the allegations against him. On Wednesday, he released a statement regarding his departure from Fox News, declaring it was “tremendously disheartening that we part ways due to completely unfounded claims.” On Tuesday, his attorney released a statement arguing that the claims represented an "orchestrated campaign... to destroy Mr. O'Reilly."

The allegations against O'Reilly have become top news stories, but they may seem unfortunately familiar to many American women.

The office may no longer look like a scene from Mad Men, but harassment remains a prevalent problem: A 2015 Cosmopolitan survey found that one in three women ages 18 to 34 described experiencing sexual harassment at work. Of these women, 71 percent said they did not report it. Why do so many women remain silent?

For one, women may feel powerless to speak up, experts say. "Women fear that there [will] be no consequences for the harasser, while they will be viewed as less vulnerable to the organization," Patricia G. Barnes, an attorney who has written multiple books on workplace discrimination, tells Bustle.

"Bill O'Reilly was an icon at Fox; his show was the network's top money-maker," Barnes says. Meanwhile, the women who were allegedly harassed by him "were small fish."

Women who are harassed, especially by men who are higher in the office hierarchy, are also often afraid of retaliation for reporting their harassment. According to the New York Times report, a former producer on his show, Andrea Mackris, stated in a sexual harassment suit filed against him in 2004 that O'Reilly once told her that he could make a woman who complained about him "pay so dearly that she'll wish she had never been born." O'Reilly ultimately settled the suit with Mackris after filing but then dropping his own extortion suit against her. He stated at the time there was "no wrongdoing in the case whatsoever by anyone."

"Often, sexual harassment is not one egregious or obvious incident but a series of behaviors that add up to a serious problem for the victim."

Even codified anti-harassment policies (which most major American corporations have) may not be enough to help victims come forward, if those victims still feel that the organization as a whole will be unsupportive of their claims. "The reality is, although laws and most organizations' policies, on paper, protect people from retaliation, often times bad things happen when people report harassment," says Human Resources Management Specialist Caren Goldberg.

These "bad things" can be as extreme as O'Reilly's alleged threat to make a victim "wish she had never been born," or as subtle as an exacerbation in workplace tension, failure to receive a raise or promotion, or a bad reference for another job.

Even without feeling that her job is in jeopardy, a woman may also fear that bringing claims of harassment might cause colleagues to side against them. "Even if there's no major fear of repercussions," Goldberg says. "There's the perception, 'Well, I'm gonna be perceived as a complainer, or hard to get along with, or too sensitive.'"

There are a wide variety of reasons, then, why a woman might not choose to report being the victim of sexual harassment. Thus, some experts say, the best course to combat harassment in the workplace is to focus on the environment instead of the victim.

"People are less likely to harass in an environment that doesn't tolerate harassment," Goldberg tells Bustle, "so focus should be on changing the environment."

Barnes hopes that the significant backlash after the O'Reilly allegations were made public is a sign of progress to come, noting more than 50 companies pulled their advertisements from his show after the New York Times report. "These advertisers were ultimately concerned about alienating women viewers," she says. "This is an indication of the tremendous power of women to make change in our society."