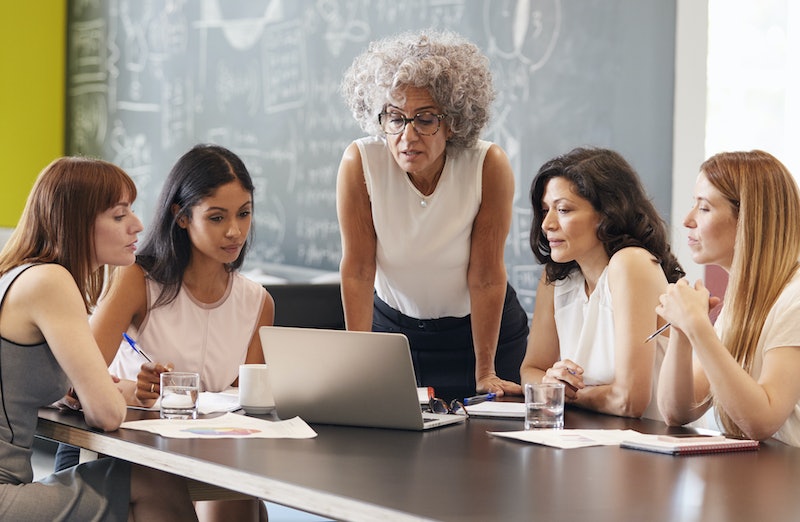 In the last few years, a rapidly increasing number of women-focused workspaces and members clubs have begun springing up all over the world, inviting female 'solopreneurs' and businesswomen to come and work among the millennial decor and portraits of fabled inventors and thinkers. The movement gained popularity with Hera Hub, which is often billed as the world's first women's workspace, and now has offices across the States and in Sweden. But London is fast catching up.

New York members club The Wing is set to open its first London location in September 2019, a sprawling, five-storey Edwardian building in Fitzrovia where founding members include Beautystack founder Sharmadean Reid and activist Gina Martin. This follows the opening of a second London AllBright Club hub in May 2018. Its founders, Debbie Wosskow OBE (founder of LoveHomeSwap) and Anna Jones (former CEO of Hearst), first met at a party in 2015 and realised they were two strangers with very different career backgrounds wondering the same thing: Where were all the women in business?

Debbie tells Bustle that "in the world of entrepreneurship, only one in five businesses in the UK have female founders and female-run businesses only attract around 2% of venture capital funding in the UK and U.S." It was stats like this that spurred the pair to create an AllBright digital network in 2016 and, later, a physical AllBright workspace for women.

"Our mantra is 'sisterhood works' and we truly believe it," Anna says, before explaining that the clubs are a place where women can "work, meet like-minded people, and attend inspiring events as well as order something delicious to eat, do an exercise class, or get their nails done."

Anna is adamant that female-focused clubs serve as an antidote to the male-dominated professional networks that permeate all areas of society. "It is within the power of other women to help empower, improve, and give you a leg-up, just as old boys’ networks have been doing for men for centuries," she explains. "Among women, there’s a recognition now that things are changing and it’s time for new networks, spaces, and ways of thinking."

In 2018, financial services company Standard & Poor's released a report that looked into the potentials effects of more women entering and thriving within the labour force. In it, they wrote, "Acceleration in U.S. GDP growth under increased female labor force participation could add a whopping $5.87 trillion [roughly £4.8 trillion] to global market capitalisation in 10 years." Women have consistently been denied a seat at the table, and it appears to have cost us — and our economies — dearly.

Women are transforming the UK freelance economy also, with figures showing that the number of self-employed women has grown by 55% since 2008. Women-focused workspaces are the remedy for the loneliness and isolation that so many freelancers face.

Blooming Founders is a "female-focused" coworking space that sprang up in 2015. Founder Lu Li explains that although her coworking space isn't exclusively for women, it provides women with a network designed to help succeed in the tech and creative spheres.

"I felt that the startup ecosystem was entirely created by men for men and nobody was thinking about the needs of female founders" Lu says. "Most workspaces are very large, tech-focused, and cultivate a bro culture, but 70% of women are self-employed on their own, so being part of a community helps with collaboration and feeling less lonely."

Then there's Marguerite, a network for women and nonbinary people who work in the visual arts, which also began in 2015. Founder Joanna Payne started her club after seven years of working in the art world and feeling frustrated at what she perceived to be the "difference in attitude and confidence" she saw in her female colleagues when compared to the men she knew. Marguerite doesn't offer a physical space, but it provides more than 40 events every year for its members. Previous speakers have included directors of The Tate and National Portrait Gallery, Maria Balshaw and Nicholas Cullinan, as well as artists Polly Morgan and fashion designer Dame Zandra Rhodes.

"The opportunity to make new friends and to hear some seriously amazing people speak about how they got to where they were turned out to be a winning combination," Joanna explains.

Of course, when these female clubs and workspaces pledge their commitment to inclusivity, it's worth taking a look at their members fees (as well as their members) to see how accessible they actually are to women of all classes and backgrounds.

The AllBright founders have previously revealed that they offer bursaries to carefully selected women from different industries and discounted membership to under 27s, otherwise access will set you back £750 a year, with an additional £300 joining fee. Marguerite offers five different memberships starting at £5 a month, with a further discounts for women who have been working in the arts for four years or less. Blooming Founders start things off at £8 a month for a digital membership that gives you access to the space for £4 an hour, or community memberships from £30 a month. At the top end of the scale is The Wing, which has membership packages ranging from £1,675 to £1,924 a year.

But for some, the benefits of women-only workspaces outweigh the costs. Becks Armstrong was a member of Blooming Founders and found that the environment was hugely beneficial for networking and entrepreneurial tips.

"When going for investment, the stats are against women. Having access to other women that have done it, or are going through it is important as we can help each other out," she says. "I have had unending support from women that have introduced me to angel investors, given me a heads-up about awards, or sent me details of events that would be important to attend."

Great things happen when women come together. Long may it continue.