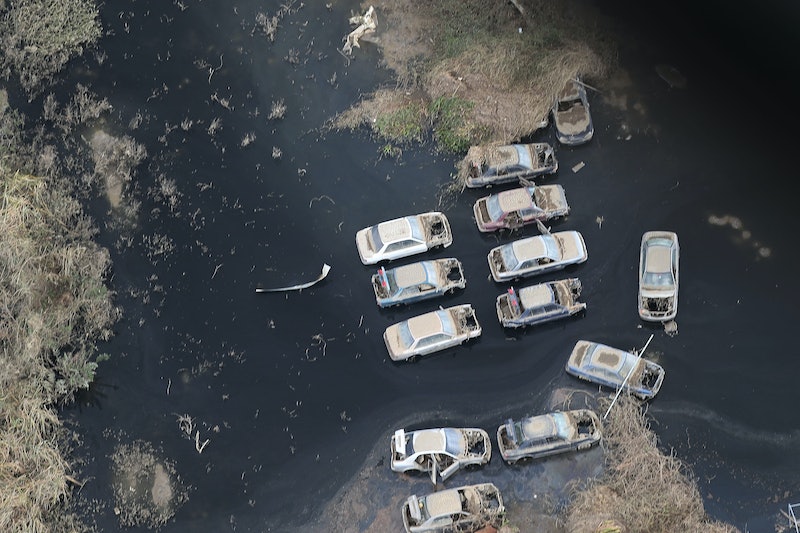 Puerto Rico is facing a humanitarian crisis in the wake of Hurricane Maria. Nearly all of the island is without power; this has left 3.5 million Americans stranded in the wake of the devastation, with more than a million believed to be without drinking water. Getting supplies to the U.S. territory has been a significant challenge of disaster relief, with it, of course, being an island in the Atlantic, and requiring boats or planes in order to get deliveries. And in the wake of the disaster in Puerto Rico, the Jones Act, which Congress has yet to lift, is facing renewed attention.

On Tuesday, the Trump administration denied a request to temporarily waive the Jones Act for storm relief, which it had for similar storm damage after Hurricanes Harvey and Irma. On Wednesday, the president attempted to reason that "a lot of people who work in shipping don't want the Jones Act lifted"; "I feel so badly for the people," he later added.

The Jones Act is also known as the Merchant Marine Act of 1920, and for a century it has governed the shipping laws for not just Puerto Rico, but for all United States maritime imports. Under the Jones Act, only U.S. ships flying U.S. flags can dock at American ports. Passed after World War I, the Jones Act was to necessitate a reliable fleet of United States merchant ships, which both increased the employment of an American industry, and also a national security guarantee that in the event of war, there would be a robust fleet of U.S. ships to handle shipping if we were cut off.

But the Jones Act has also increased the prices for goods shipped to American ports. In Puerto Rico, where all imports must come by boat or plane, this has caused supplies to the island to come at increased prices. And even in the midst of the crisis in Puerto Rico, with the island desperately needing any supplies it can get, and quickly, many have argued that the Jones Act is cutting off Puerto Rico from its necessary aid.

After the administration denied Puerto Rico's request to waive the Jones Act, Sen. John McCain urged it to do so not just for the storm, but permanently: "a full repeal of this archaic and burdensome act."

It is unacceptable to force the people of Puerto Rico to pay at least twice as much for food, clean drinking water, supplies and infrastructure due to Jones Act requirements as they work to recover from this disaster. Now, more than ever, it is time to realize the devastating effect of this policy and implement a full repeal of this archaic and burdensome Act.

The Trump administration has argued that they did not waive the Jones Act because Puerto Rico's ports are still in such bad shape that even allowing more ships to dock there wouldn't change things much.

Beyond the problems of just getting supplies to Puerto Rico that the Jones Act creates, there is perhaps an even bigger problem of how the supplies are given out on the island. With so much of the island devastated, it's hard for what supplies do get to the U.S. territory to get to the people who need them.

But with the status on the ground in Puerto Rico so dire, it seems like any help the island can get will be necessary, and waiving the Jones Act could certainly make it easier to get supplies to the U.S. territory, even if it wouldn't be enough to solve the crisis.