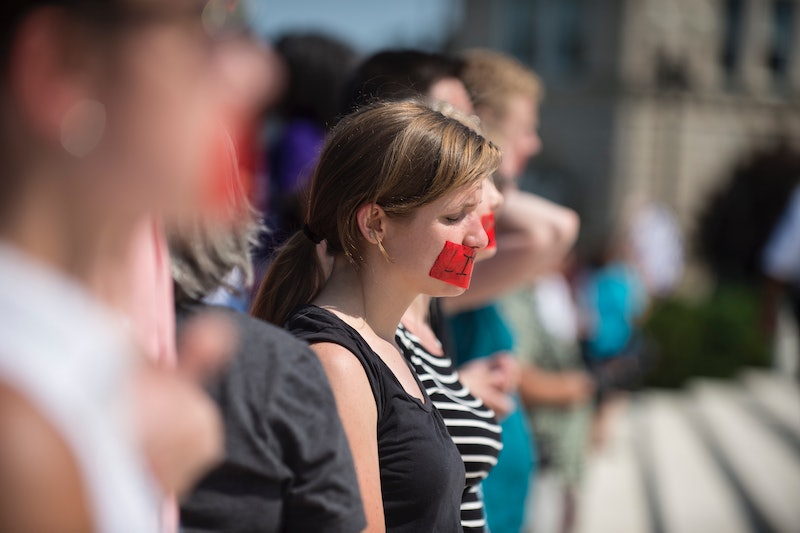 In its effort to be a fully inclusive event, the upcoming Women's March movement almost undermined a central tenant of feminist theory: the right to abortion access. The pro-life group New Wave Feminists was dropped as a partner for the Women's March on Monday due its advocacy for legal restrictions on abortion, and in doing so, the event organizers made the right choice to represent true feminism. You can't be pro-life and a feminist because the pro-life movement inherently advocates for the subjugation of women, and there's no way to get around that fact.

The Women's March released an official statement regarding New Wave Feminists on Monday, saying that it was sorry for the "error" in including the pro-life group as one of its partners. "The Women's March platform is pro-choice and that has been our stance since day one," the organizers said in a post shared on various social media sites. "We look forward to marching on behalf of individuals who share the view that women deserve the right to make their own reproductive decisions."

A representative from New Wave Feminists responded to the controversy by criticizing the organizers' commitment to inclusivity, but affirmed that the group would still show up to the march this weekend. "It appears that the [Women's March on Washington] only wants to include a 'diverse' array of women who think exactly like them," said spokesperson Destiny Herndon-De La Rosa to LifeSiteNews Tuesday. "That's unfortunate, but we will not be deterred. On the 21st, we march."

It's awesome that New Wave Feminists still want to come and support the ideals of the march as clearly stated by the event's organizers, but their beliefs also negate their self-stated identity as feminists. The essential ideal of feminism is that all women deserve the freedom to make their own choices, and fighting to limit access to a safe and legal medical procedure for women is very anti-feminist.

The pro-choice movement gives women the freedom to live their sex lives in whatever way is most comfortable for them, and to decide if or when they want to start a family. Having sex isn't being irresponsible, and pregnancy shouldn't be a responsibility to be forced to endure.

What keeps this argument from being hypocritical is that you are absolutely allowed to believe that abortion is wrong and want it to never happen again; you just can't advocate to legally eliminate it and take away the option from other women. In fact, many of the same societal structures that create circumstances in which abortion is a useful option need feminist reform, like poverty, the gender wage gap, and sexual violence against women.

If you feel strongly about decreasing the demand for abortion in the United States, you can put your amazing feminist energy into solving these problems, rather than restricting other women's choices. But fighting to take away the option for safe and legal abortion away from women is anti-feminist, and aligning yourself with a movement that advocates for restricting that choice automatically invalidates your feminist identity.

The current pro-life movement is seeking legal restrictions to abortion that would severely limit women's private life choices, and under no circumstance is that OK. Women must be allowed to freely and safely make their own choices regarding family planning, one of the most intimate and personal decisions anyone will make in their life.

Fighting to lower the abortion rate by eliminating the financial and cultural factors that frequently contribute to the necessity of abortion is a great way to express yourself if you feel so inclined, but you have to fully respect women's right to make their own reproductive choices if you want to call yourself a feminist.