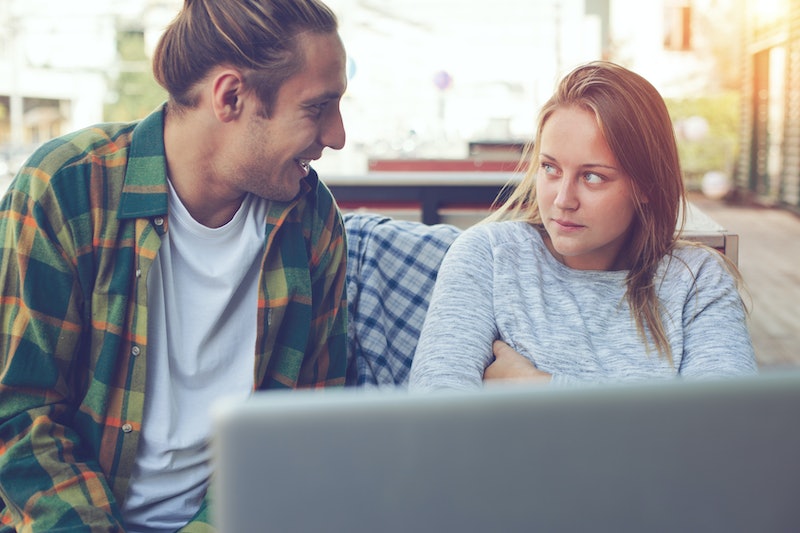 If you and your partner keep having the same fight over and over, you're suffering from one of the most common relationship issues. We've all been there. It all starts with one person being annoyed that the other person left their dishes out or said something in a weird tone — and then the fight starts. But before you know it, the dishes and the tone are totally forgotten and you're back to the fact that they never followed through with that thing they promised you last year or the one time they lied or whatever ugly beast rears its head in your relationship from time to time. Before you know it, it's 2 a.m. and you're wondering how you're having this argument again.

"Most triggers are about the past, and so they connect to fears of the future," zen psychotherapist and neuromarketing strategist Michele Paiva tells Bustle. Which explains why you may keep finding yourself debating the same issue, even saying the exact same things, weeks or months apart.

"For instance, if you dated openly in the first month of dating but your partner opted not to, this might come up over and over again, as a fear for the future," Paiva says. "The past often shapes how we see the present and future, but in zen, we look at staying in the present and being at peace with the moment," she says. "If you do that, you will see that life really isn't filled with triggers — but baggage. Let go of the baggage, you'll feel lighter."

But that's a lot easier said than done. How do you stop yourself from having the same fight over and over? Well, part of it comes from nipping things in the bud:

Deal With Issues As They Come Up

One of the best ways to avoid these horrible, repetitive fights is to actually address issues as they come up — and address them thoroughly. Then you won't have this burning resentment that comes out again and again.

“Communication creates confidence in a relationship," Sarah Patt, matchmaker and dating expert says. "When you are transparent and honest with your feelings, it opens up the line of communication and allows everything to be put on the table for discussion. It is important to feel comfortable sharing personal information with your partner, whether it is life-changing information or just how your day went."

And talking things out can bring you closer too. "When you have an open line of communication, it builds confidence in your relationship and allows you to grow closer as a couple," she says. "There’s less chance for misunderstandings if all of your cards are on the table and no games are being played.” So when you air out an issue the first time, make sure you really air it out, then do your best to put it to bed.

Stop Yourself When You Can

If you had promised to let something go, then you need to do it. We can all be petty and bring up something that we've blown out of proportion and just can't let go of. Try to feel yourself reaching for the trigger and think, Is this a real problem? Is it worth bringing up? Why am I doing this? If it's not constructive or healthy, try to resist the urge.

See If This Problem Has More Significance Than You Let On

The other side of the coin is that you may be pretending something is less significant to you than it really is. Say your partner has lied to you or cheated and you thought you were OK with it— you may have genuinely though that— but you just aren't. "Unresolved core issues initially manifest as small disagreements, but left unsolved, these have the potential to grow in size and intensity," Talia Wagner, Los Angeles-based marriage and family therapist, tells Bustle. "When arguments don't lead to resolution, people's frustration and dissatisfaction grows, breeding anger and resentment, and as such, a cyclical pattern of escalation develops very easily."

So what can you do? Well, you need to decide if you're actually OK with it. Maybe it was a deal-breaker and you just weren't ready to admit it to yourself. "At the end of the day, being honest with yourself about your expectations of life and your personal happiness should lead to the answer of staying or leaving," Wagner tells Bustle. If you genuinely can't let go of something, it may be time to walk away.

If you find yourselves in those awful circular arguments, you really aren't alone — so many couples go through it. Try to deal with issues thoroughly when they come up and admit how much they actually mean to you and you should be able to break the cycle.