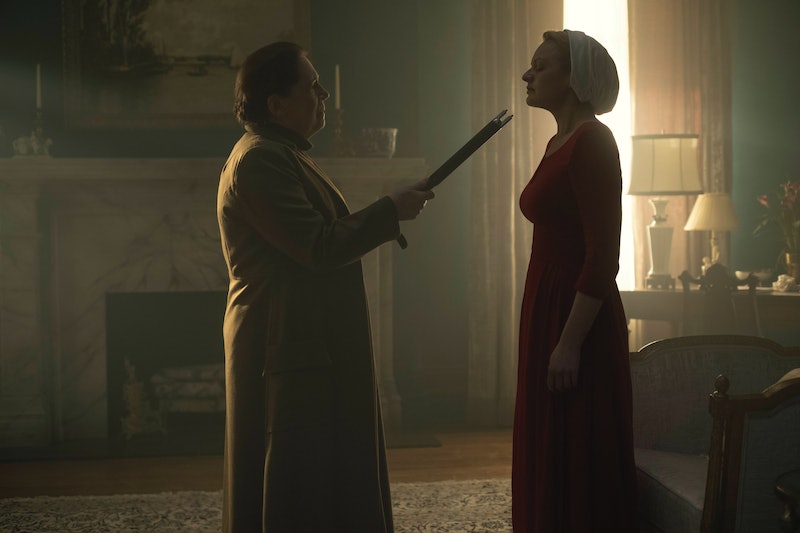 For as much progress as we've made in the discourse surrounding rape, there seems to exist a lingering resistance to call it what it is. The term sounds violent, invasive, profane — a direct embodiment of the very violation it describes. To soften the blow, we've adopted weaker phrases like "non-consensual sex," and in doing so, we strip the word — and the experience — of its power. Non-consensual sex sounds like breaking some unwritten honor code, but rape? Rape is a horrible crime.

Take, for example, The Handmaid's Tale — a show with a premise built around the repeated dismissal of rape. It's set in a patriarchal autocracy in which sterile couples keep fertile women as surrogate slaves. Except here, they're called "handmaids;" rape, a holy ceremony; and their abuse, a blessed opportunity to fulfill their predestined purpose and bear children for man.

Five episodes in, the word rape hadn't even been uttered, only shown amidst flashes of awkward bed squeaks and dead-eyed glances. It's not until its sixth installment, "A Woman's Place," that Offred, the central handmaid, finally musters the courage to define what's happening to her. "We're prisoners, "she says. "They gouge out our eyes, maim us in worse ways than you could imagine. They rape me every month, whenever I might be fertile."

The moment seemed inevitable, and yet, it still felt like a brutal gut punch. Thus far, their twisted dystopia had been peddled as necessity — a prerequisite to repopulate their dwindling society. When an ambassador from Mexico comes to America to discuss potential trade, the Commander and Serena Joy tout Offred's servitude as many things — a valiant choice, a sacred position, a noble sacrifice — but never rape, never slavery.

The characters seem so convinced that what they're doing is virtuous and just, you begin to believe they may actually be that delusional. When Offred informs the Mexican ambassador that she's lied, that life in Gilead isn't pleasant, but cruel and inhumane, the ambassador seems genuinely awestruck. But such a reaction is logistically impossible: If she were considering introducing Gilead's practices to her own country, she would have needed to be intimately familiar with how they operate. Perhaps because they downplay their wrongdoings with such idealistic terms, it somehow felt less real.

This reflects directly on what diminishing the word rape means in the immediate world. As Kelly Oliver writes for The New York Times, "non-consensual sex" is an oxymoron in itself. Sex mandates consent. Without it, sexual activity is not sex. It's violence. Moreover, Oliver says, it implies that one party asks for sex while the other merely gives or withholds it, and once it is granted, it cannot be revoked. This reduces rape to a simple yes/no interaction, and while no certainly means no and only yes means yes, it discounts the complicated stretch in between, where things like drugs and alcohol and power politics might make the act sound less explicit, but don't dilute the crime.

Take, for example, the Roman Polanski rape case, in which he pleaded guilty to unlawful intercourse with a 13-year-old minor. In discussing the felony on The View, Whoopi Goldberg said, she didn't consider it "rape-rape." "It was something else but I don't believe it was rape-rape," she explained. Or consider Josh Duggar, who admitted to sexually abusing five young girls, including four of his sisters. And yet his father, Jim Bob, insisted on Fox News that, it wasn't "rape or anything like that," it was "touching somebody over their clothes." Even when Donald Trump, who's since been elected to the nation’s highest office, bragged on tape about grabbing women by the pussy, it was written off as "locker room talk."

One shouldn't need to explain why breeding a culture in which rape is not always called by its true name is problematic. It not only makes it permissible, it implicitly emboldens it — so much so that in Gilead, it's law. Issues of consent are, of course, complicated, and the questions that it raises myriad, but while labeling rape something lesser may help ease our moral compass, it will never change the definition.

So, like Offred, let's face the word head on. After all, its survivors have to every day.

More like this
Long Live Bennifer!
By Allie Jones
Why The '365 Days' Sex Scenes Are Good, Even If The Movies Aren’t
By Arya Roshanian
Twitter Was Saying The Same Thing About Sam Ryder’s Surprising Eurovision Result
By El Hunt
Yomi Adegoke On The Offline Diaries & The Power Of Representation
By Jessica Morgan
Get Even More From Bustle — Sign Up For The Newsletter