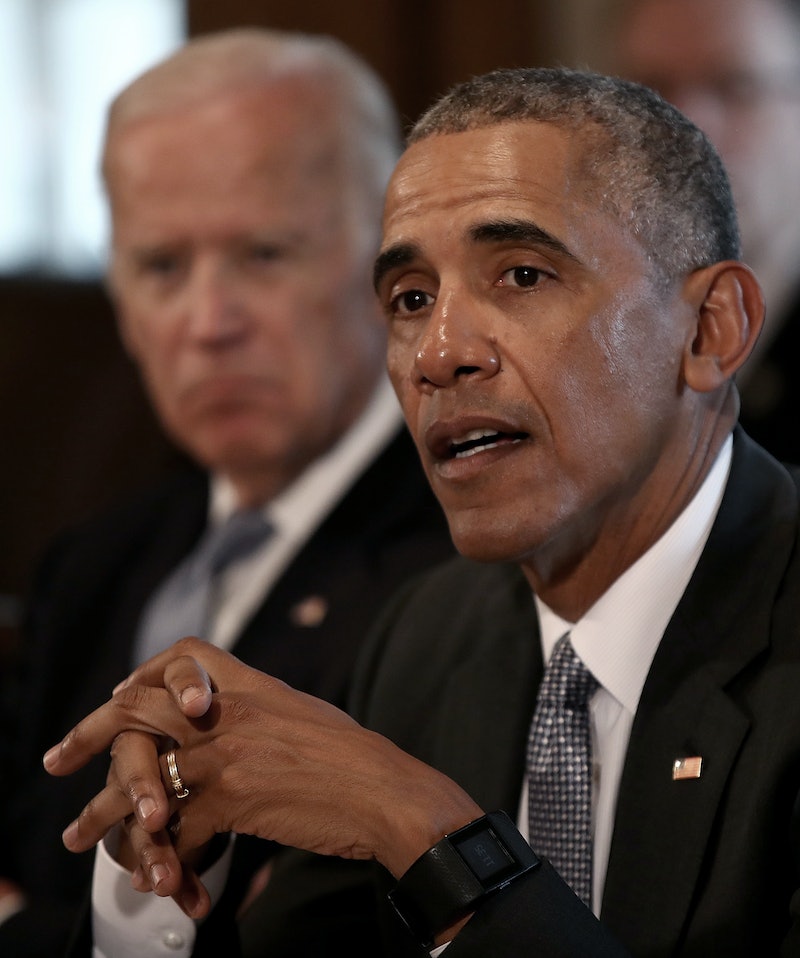 It's happening: President Obama only has 15 more days in office until President-elect Trump officially takes over. As has been commonplace for every administration before him, he will give a farewell speech to mark the end. On Monday, the president announced that this speech will come on Jan. 10. While it might be hard to do so, here's why you should make yourself watch Obama's farewell speech whether or not you're ready to say goodbye.

It's a bad habit I'm super loyal to, and it inevitably lets me down every time: when I don't like the way something is going I ignore it and pretend it isn't happening. You might be familiar with this tactic, too. The thing is, sticking your head in the sand about the Obama tenure ending so differently from what many of us hoped for won't make it go away. Instead, celebrating the presidency is a good way to tie up loose ends. When you're faced with the truth, it helps you move on.

The farewell speech, will take place at McCormick Place in Chicago, a familiar spot to the administration since it's where the 2012 election night celebration happened. In advance of his speech, Obama released the following statement:

On Tuesday, January 10, I'll go home to Chicago to say my grateful farewell to you, even if you can't be there in person.

I'm just beginning to write my remarks. But I'm thinking about them as a chance to say thank you for this amazing journey, to celebrate the ways you've changed this country for the better these past eight years, and to offer some thoughts on where we all go from here.

Since 2009, we've faced our fair share of challenges, and come through them stronger. That's because we have never let go of a belief that has guided us ever since our founding—our conviction that, together, we can change this country for the better.

So I hope you'll join me one last time.

Because, for me, it's always been about you.

Many presidents have taken the farewell address opportunity to drop their two cents before the currency sharply fell in value.

But before that, the Obamas will throw a farewell bash on Friday, the last big party they'll have at the executive mansion. Unsurprisingly, they've got a great line up too — one that will provide an, um, interesting contrast to the lack of celebrity support at the actual inauguration. It'll include stars like Usher, Samuel L. Jackson, Oprah Winfrey, Bradley Cooper, Beyoncé and Jay Z, Stevie Wonder, J.J. Abrams, and George Lucas, according to The Washington Post.

Click here to find out how you can watch it live, and if you're fancy, how you might even be able to snag a ticket.

More like this
Mariah Carey Is "So Proud" After Her Kids Joined Her In The Thanksgiving Day Parade
By Stephanie Topacio Long
Fellow "Queens Of Christmas" Celebrated Mariah Carey's Failed Trademark Bid
By Stephanie Topacio Long
Mollie King & Stuart Broad Just Shared The First Pic Of Their Baby
By Sophie McEvoy
Here’s Your Daily Horoscope For December 2, 2022
By Mecca Woods
Get Even More From Bustle — Sign Up For The Newsletter