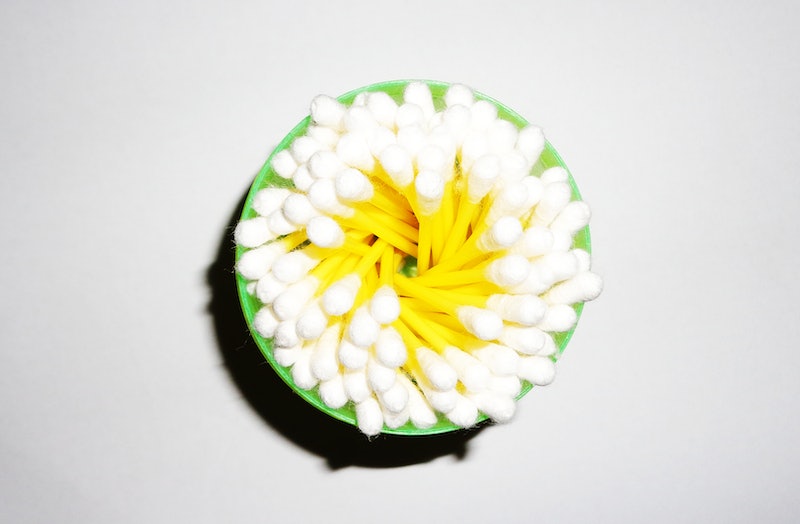 I'm willing to admit that I've done it myself: I've cleaned the wax out of my ears with cotton buds. It's weirdly satisfying, but as we've all been told before, we really shouldn't do it. In fact, the reason you should never clean your ears with cotton buds is pretty serious. A recent guideline published by the American Academy of Otolaryngology-Head and Neck Surgery Foundation breaks down why, exactly, using cotton buds to remove wax from your ears is a no-go — and you're going to want to pay attention to it.

Before we get into that explanation, though, it's good to review why people use cotton buds in their ears to begin with. Generally speaking, we want to remove wax from our ears because we think it will help us hear better. This makes a lot of sense! Many of us also try to remove wax from our ears because we associate wax with being dirty or unclean. For example, we might think that if we haven't removed the wax inside of our ears with a cotton bud, we're being "gross" or "unhygienic." For many of us, using cotton buds in our ears feels as much a part of our regular routine as taking a shower, clipping our nails, or brushing our teeth.

And let's face it: There is also something weirdly satisfying about pulling out the cotton bod and seeing all of that gunk on it. Am I right, or am I right?

But sadly, the science is in, and the resounding conclusion is that we should treat our ear wax by... leaving it alone. Seth R. Schwartz, chair of the update group for the American Academy of Otolaryngology-Head and Neck Surgery Foundation, explained in a press release, "Patients often think that they are preventing earwax from building up by cleaning out their ears with cotton swabs, paper clips, ear candles, or any number of unimaginable things that people put in their ears. The problem is that this effort to eliminate earwax is only creating further issues because the earwax is just getting pushed down and impacted further into the ear canal."

That's right: By using a cotton bud to pull out wax, you might actually be pushing the wax further back into your canal, making it more clogged and compacted (ouch). According to Heathline, when you have compacted ear wax, it can have some serious effects on your health. For example, you might experience a loss or difficulty hearing, a feeling of "fullness" in the ear, a ringing or buzzing in the ear, or even an infection. If you have an actual ear infection, you're likely to experience severe pain in your ear, drainage, fever, dizziness, and odors emerging from your ear. The best solution? Get to a medical professional ASAP.

You know how our bodies generally do really cool things on their own? Like, for example, how vaginas are self-cleansing? Well, despite these neat-o maintenance abilities that come built right into our systems, we're also constantly marketed items that are supposed to do the same thing. Despite our vaginas' ability to clean themselves all on their own, for example, douches and other cleansing methods are still advertised to us all the time — even though douching can be harmful to your body. Of course, some people are told to douche or otherwise cleanse their vaginas for medical reasons, and that's totally valid; for most of us, though, it isn't necessary.

Removing wax from our ears is the same idea. For the majority of people, ear wax removal happens naturally, with your body ridding itself of the old wax by itself; still, though, we're often taught that it's gross to leave our ears to our devices, even though poking around in there can be kind of dangerous to our health.

But if you're not supposed to swab things out with a cotton bud every day, are there ways you can actually clean your ears safely? What can you do if you're convinced built up wax in your ears is causing legitimate problems? The American Academy of Otolaryngology-Head and Neck Surgery Foundation has a few suggestions you can try at home. First, you can clean your ears by washing the external ear with a cloth. If your ear wax is clogged or hardened, you can also try home treatments to soften said wax. Some recommended options include placing a few drops of mineral oil, baby oil, glycerin, or commercial drops into your ear.

And if you're seriously concerned about your ear wax, see a doctor or other medical professional. It's always better to be safe than sorry — and that includes keeping foreign objects out of your ears.