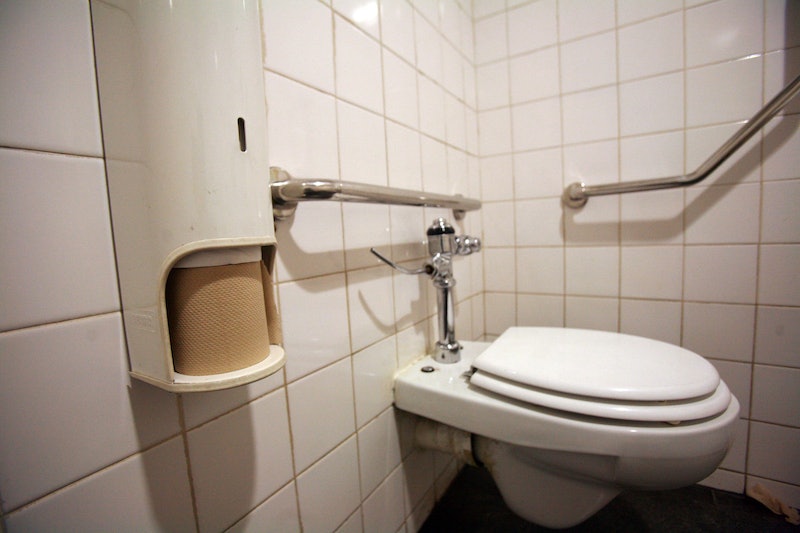 Toilet-flushing habits don't make for the most polite dinner party conversations, but there are some essentials you definitely need to know — like why you should never flush the toilet with the lid up. Aside from cleaning in and around the your toilet whenever you realize you absolutely have to, many of us don't really give much thought to what lurks inside the bowl and beneath the lid after we've done our, erm, business. And so unfortunately, it rests on me to educate your lid-lifting habits, because there's a whole lot of skin-crawling, unspeakable horror that you might want to watch out for. (Or, you know, basic hygiene. How gross you find it depends on your point of view, I suppose.)

If you assumed that giving your toilet the once-over with a spritz of bleach every few weeks was enough to keep harmful germs at bay, you might want to think again — because that's exactly why scientists and experts actually highly recommend putting the lid down before flushing. It's all down to what is known as "toilet plume" — the small particles of waste that mix with the water in your toilet after you flush and which can shoot aerosolized feces into the air (as high as 15 feet, apparently!). According to Business Insider, Philip Tierno, a microbiologist at New York University, advises putting the lid down first for this very reason, "especially if the bathroom is used by multiple people." Every time you flush, these bacteria (which may be from a whole host of people) could be spraying into the air around your toilet and potentially making you super sick.

The science is pretty convincing, too. Back in 2012, researchers at Leeds University tested the air above toilets and discovered that a particular germ called C. difficile (which causes violent bacteria and vomiting) can be hurled up to 10 inches above toilet seats every time they're flushed without closing the lid. Prevention also notes that these germs were also spotted in and round the sides of the toilet and even when no-one was using the toilet. So basically, an uncovered toilet that's not in use can still spread bacteria. Ew.

Another study from the University of Oklahoma with similar methods concluded that "toilet plume could play a contributory role in the transmission of infectious diseases." What's more, Business Insider notes that a 1975 study (which was before the adoption of low-flow toilets which don't spray out as many germs) found that pretty much whatever you put in your toilet can stay there long after you flush, as well as that toilets can disperse harmful microbes far enough to occupy other objects and surfaces in the bathroom. Like your toothbrush.

So what can we do to ensure our toilets aren't contributing to making us sick? If you're somewhere the toilet doesn't have a lid, like a public restroom, it might be a little complicated; according to Business Insider, Tierno advises exiting swiftly after flushing as a good way to protect yourself from flying microbes. But at home, just close the lid before pulling the handle. You can also make sure your toothbrush, any cups or waterglasses you keep in the bathroom, and so on are either covered or put away.

And we can also all take some solace in the fact that it's mainly the old toilets which are still in use today which create the most toilet plume — the new ones aren't as risky. So watch where you wee, slam that lid shut, and you should be A-OK.