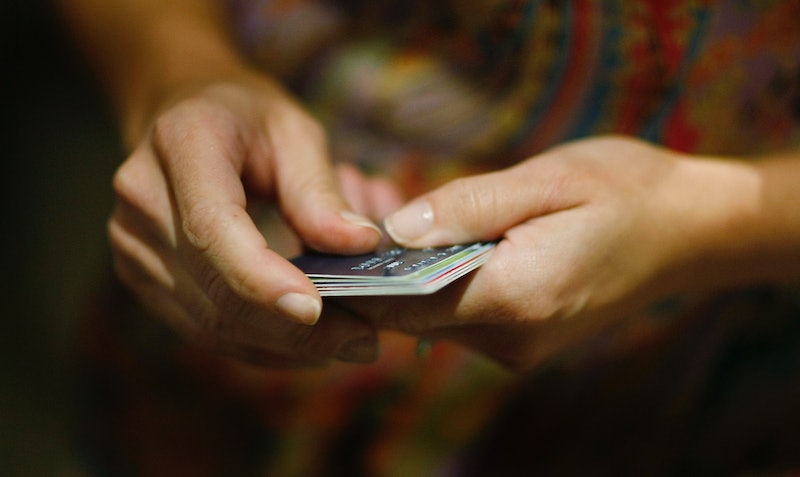 So, your bestie, your bae, or a sibling is short on grocery money this month and asks to borrow your credit card to grab some essentials. While it's human nature to want to help, that good deed could come back to bite you. In fact, you should never lend someone your credit card, according to CreditCards.com's Senior Industry Analyst Matt Schulz.

"When it comes down to it, if you lend someone your card, you’ve got a one in three chance of getting burned," Schulz tells Bustle. "And the younger and less affluent you are, the greater those chances are. You're better off just saying no." Basically, if you don't have the cash to help someone out of jam, lending them your credit card doesn't always end well, and it could even ruin your friendship.

According to a new survey from CreditCards.com, millennials are significantly more likely than other generations to lend credit cards to their friends. While it's always cool to be kind, millennials are also the generation most likely to report that cards they lent to other people were lost or stolen. "They say the road to hell is paved with good intentions, and that certainly applies to lending a credit card," Schulz says. "If you're going to do it, proceed with caution and remember that no matter who makes the purchase, you're ultimately responsible for paying the bill."

It's no secret that millennials have a reputation for being nice. In fact, another survey by Jive Communications, a telecommunications company, noted that millennials are the kindest and most patient generation when it comes to dining out — they might even put your dinner on their credit card. While it's great to finally be recognized for something good, all this being-nice business means that you're not always looking out for yourself, and that's especially true when it comes to finances. It might seem like no biggie to lend your credit card, and perhaps this is because, according to the New York post, generation nice doesn't necessarily understand everything about how credit works, which can lead to making risky decisions.

Another reason you may be quick to fork over your card, according to CreditCards.com, is because lending money shows you care. "Money means a lot of things to a lot of people,” Jeffrey Shinal, a financial therapist and psychotherapist, said in a report of the survey results. "It can be treated as a way to show love, affection and connection to people, and one of the easiest ways to show care or love to others is by providing for them." Even though giving might induce all the feels, Forbes noted that you should only lend someone money if you can realistically afford to lose it.

Like a lot of young people, I have significant credit card debt. And, despite this reality, I usually almost always try to help out friends with the realization that sometimes I am just giving that money away versus lending it. Because, if a friend is in enough of a jam that they need to borrow you credit card, there may be a larger issue at play, and it may be unlikely that you'll ever see that money again. "If you’re asking somebody to lend you a credit card … you’re probably in a desperate place," Terrence Shulman, founder of the Shulman Institute for Compulsive Theft, Spending and Hoarding, noted in the survey results. "When people are desperate, they often bite off more than they can chew. They might promise to pay things back in a while, but it’s not realistic."

According to the survey, 30 percent of people said they regularly lend their credit cards to their partners. If you're in a healthy, committed long-term relationship, and you have a clear understanding about how you share finances, this could be an exception to the rule. "Don't let just anyone use your card. Letting your wife or husband borrow your card is one thing," Schulz tells Bustle. "Letting Allison from accounting or that guy you play basketball with on Thursday nights borrow your card is something else entirely."

However, while it might seem perfectly safe to loan your credit card to your partner, a recent survey from financial firm Aspiration found that when it comes to sharing information about money, couples are keeping a lot of financial details to themselves. What's more, for rocky relationships, a loaned credit card could results in revenge spending. "The other individual in the relationship starts spending money as a way to level the powerlessness, or as retribution or retaliation," Financial Therapy Expert Debra Kaplan said in the CreditCards.com survey results. If you've ever seen the HBO show Big Love, Nicki's secret $60,000 credit card debt is a prime example of this.

If, despite all of the risks, you do decide to lend someone your credit card, there are some things you can do to reduce your chances of a negative outcome. CreditCards.com recommended setting a limit on how much the person can spend, or even going with them to make purchases. If you can't go along with your friend, partner, or family member, make sure you're monitoring your monthly statements and checking your credit score on the regular so you don't get an unpleasant surprise later. Because, of all the things that can make a relationship or friendship go sideways, money shouldn't be one of them.

More like this
What Is Brad Pitt’s Net Worth? The Bullet Train Star Now Makes 8 Figures Per Film
By Hugh McIntyre
What Is Beyoncé's Net Worth? The 'Renaissance' Hitmaker Makes 9 Figures On Tours
By Radhika Menon
Are Leo & Capricorn A Good Match?
By Kristine Fellizar
The Top Mistakes Scorpios Make In Relationships (& How To Avoid Them)
By Nina Kahn
Get Even More From Bustle — Sign Up For The Newsletter