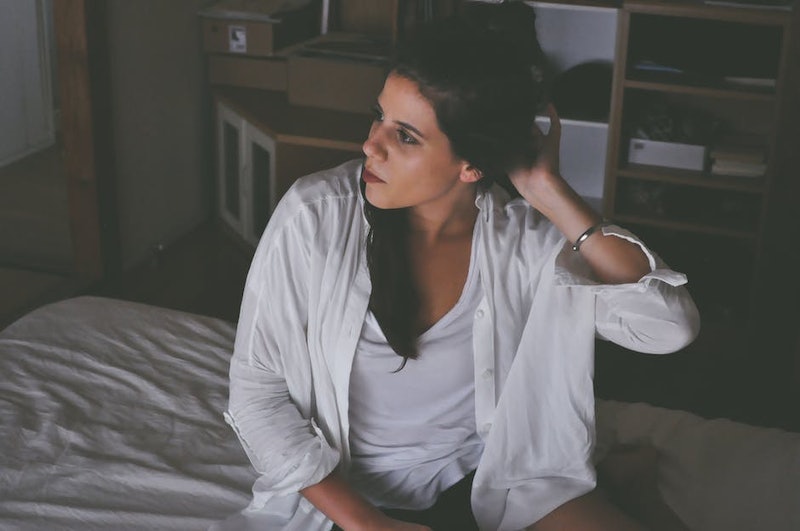 When you think of the term "hot flashes," younger women aren't often what springs to mind; we typically associate hot flashes with menopause, which doesn't usually kick in your early 50s. However, new research explains that you shouldn't ignore hot flashes if you experience them if you're nowhere near menopausal age (it normally hits around 48 to 55 years old, FYI) — and the reason why may come as something of a surprise.

According to Mayo Clinic, hot flashes are defined by "sudden feelings of warmth, which are usually most intense over the face, neck and chest. Your skin may redden, as if you're blushing. Hot flashes can also cause profuse sweating and may leave you chilled." Although several other hormonal conditions can cause them, a hot flash is usually linked to menopause, which is the stage in life when people who are capable of menstruating naturally stop getting their period. A premature menopause is defined as one which hits before the age of 41; early menopause is more likely to occur at an earlier age in people who smoke, have never been pregnant, or live at high altitudes.

However, new research may cause people who are younger than the typical menopause age to be extra vigilant if they experience hot flashes: There's evidence to suggest that hot flashes may indicate a higher risk for heart disease. However, by "younger," researchers are talking about those aged around the 40-to-53-year-old age rage; so although it might not directly affect some of us now, it's definitely something to look out for.

A study published in the journal Menopause analyzed the correlation between hot flashes and the function of the endothelium, which is a layer of cells that line the blood vessels reports Health Central. The site noted that good endothelial function is conducive to good cardiovascular health and can prevent conditions like atherosclerosis, which is a hardening of the arteries and which can severely effect the functionality of the heart.

The study, which was led by the University of Pittsburgh Graduate School of Public Health, involved 272 non-smoking women between the ages of 40 and 60 who also had no history of heart disease and had never previously experienced any hot flashes. Researchers kept track of the women's biological signs of hot flashes and created tests to measure their endothelial function within their arteries. Interestingly, they found that the participants between the ages of 40 and 53 years old who experienced hot flashes were actually at an increased risk for cardiovascular problems that are linked to heart disease. For those women aged between 54 and 60 years of age, scientists did not find a link between hot flashes and those cardiovascular problems.

So although the study doesn't offer conclusive evidence to support the idea that all hot flashes in younger people are dangerous and can lead to heart problems, the research does offer a strong case that people who menstruate aged 40 t0 53 can be more at risk if they experience hot episodes. Study leaders concluded that they hope their findings can "provide information about women's vascular status beyond cardiovascular disease risk factors and estradiol." And of the course, the more information we have in relation to this, the more likely it is that fewer people will have to suffer from heart problems at all.