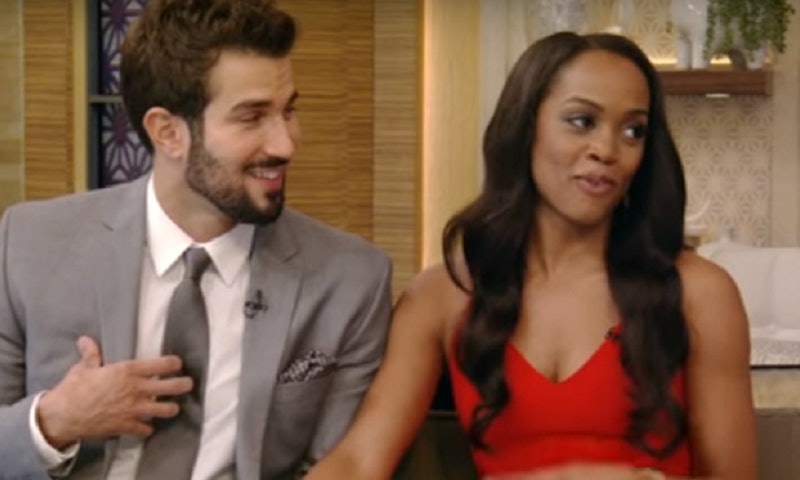 In one of the most divisive finale's in Bachelorette history, fans watched as Rachel Lindsay chose Bryan Abasolo over everyone else's apparent dream babe, Peter Kraus. And in yet another decision likely to provoke ire among some fans, Rachel revealed that she'll be taking Bryan's last name during a new interview on Live With Kelly And Ryan. If you're already shaking your head over this, and thinking to yourself, that this is some patriarchal BS, then just chill for second. Let's talk this through. You really can't judge Rachel for taking Bryan's last name.

The first thing to acknowledge here is that, whether you like him or not, Rachel is clearly besotted with Bryan in a way that feels comfortable and natural. During the Live With Kelly And Ryan interview, they appeared relaxed and in-sync with each other, and there was clearly the sort of mutual respect between the two that every healthy relationship needs. The second thing to acknowledge is what happened when co-host Rita Ora excitedly asked Rachel if she'll be keeping her last name.

Without hesitation, and with absolute confidence, she responded with an adoring smile, and said, "No, I'll be taking his last name." It's worth noting that Bryan remained respectfully silent during this moment. He didn't charge in proudly boasting that his fiancée would become Rachel Abasolo before she even had a chance to answer, or run victory laps around the studio like a prize stud. Instead, he was silent, grabbed her hand, and kissed it. It was pure romance, you guys. It was beautiful.

Taking the surname of your husband is a decision that remains controversial among some feminists. Some women see it as an archaic throwback to a time when marriage was a contract that basically made women the property of their husbands and adopting a husband's surname is viewed as signs of that subordination. But it's 2017 and times have changed; Rachel taking Bryan's last name is clearly a romantic gesture, one that's deeply personal to both of them.

Plus, the meaning of marriage, as well as the dynamics and decisions that a couple makes within that union, have changed dramatically since marriages were little more than property exchanges. As such, there are plenty of feminists who have happily taken their husband's surname in marriage without it taking it to mean that they have to tear up their membership card to the sisterhood. If anything, such a decision can now be seen as a proud exercise of choice. We no longer have to take our husband's surname in marriage — we can choose to do so. And isn't judging a woman for her freedom of choice the most anti-feminist thing you can do?

Plus, Rachel's choices during and following The Bachelorette have already been judged harshly by fans. While there's nothing wrong with hurling some choice words at your TV in disagreement with a reality TV show over a few glasses of wine, or snarling your frustrations out with a set of carefully selected emojis on Twitter, we should all take pause to check our judgments every once in a while.

Yes, we all loved Peter and that makes it easy to criticize the choices she makes with Bryan. But look at it this way — there's a genuine thrill in seeing Rachel choose the correct guy for her needs, even if he's not the most popular guy. And there's also something great about seeing her choose to take Byran's surname in marriage, even if that's something that might not be expected of a Bachelorette who seemed to toe a feminist line all season.

The bottom line is that Rachel and Bryan seem happy. And whatever choices she makes within that dreamy haze of happiness are all hers to make, not yours.