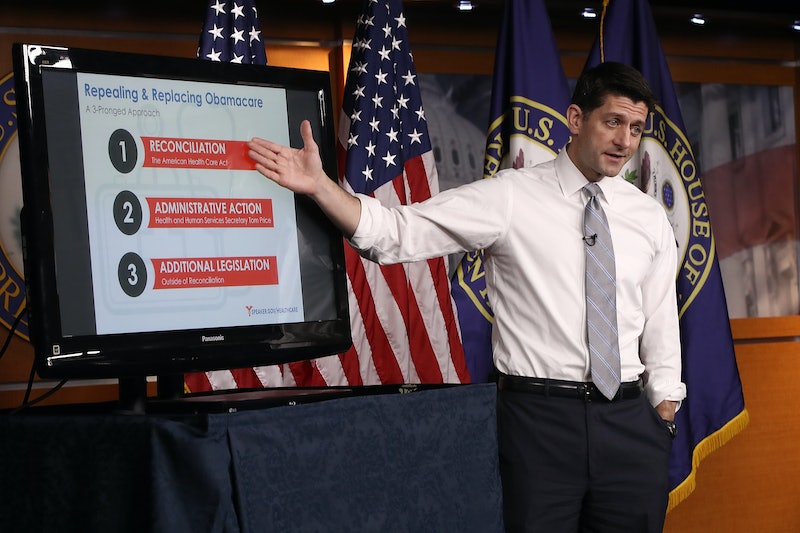 This week, a little something called H.R. 1313 propelled itself into the news, with a number of scaremongering headlines about how the bill would let bosses "demand" that employees get genetic testing and legalize forced genetic testing in the workplace. Sounds scary, right? And typical of the current Congress? Well, as it turns out, it's also not anything to get terribly worried about, because the claims being made about the bill are untrue, and it's all bark and no bite.

Friends, we need to talk about "garbage bills" — terrible legislation introduced by legislators who know it won't pass, for the specific purpose of political theater. It's flashy, it's dramatic, it sounds absolutely vile, and it gets a lot of attention, even though it's going nowhere. In a political landscape where more people are getting involved with the system, some aren't as familiar with the smoke and mirrors of Washington, DC, so I'm here to arm you with some information.

Because while there's a lot to panic about right now, garbage bills shouldn't be eating up your bandwidth. You deserve better!

Only About 4 Percent Of Introduced Legislation Actually Passes

Sometimes it feels like those layabouts in Congress are fiddling while Rome burns, but in the process, they introduce a lot of legislation. In the 114th Congress (January 2015- January 2017), three percent of introduced bills were actually enacted. In some Congressional sessions, it's been just two percent, and it's very rarely gone above five percent.

Since January 3, 2,420 bills and resolutions have been introduced in Congress. Eight have been enacted. We think of legislation as a big important deal, but members of Congress treat it like taking the dog for a walk.

Legislators who present garbage bills know they aren't going to pass — the goal isn't to enact legislation, but to make some kind of a political statement. Often, the goal is to get press or lots of public attention, good or bad. If a law sounds dramatic, extreme, clearly unconstitutional, or logistically impossible, there's a chance you're looking at a garbage bill. (Sorry, fans of the Everyone Gets a Unicorn Act of 2017.)

In some cases, lawmakers feel beholden to supporters, and introduce a bill as a token gesture or to get their base fired up. Sometimes it's a protest or comment — take, for example, the slew of Affordable Care Act-related bills introduced this year, like the World's Greatest Heathcare Plan of 2017, the Obamacare Taxpayer Bailout Prevention Act, and the Obamacare Replacement Act. The titles alone provide a clue that this legislation is primarily for show.

Sometimes they're also responding to the perception that lawmakers "don't do anything." If they have a list of introduced legislation on their websites, they can point to constituents when they ask what, exactly, their tax dollars are funding. A closer look may reveal that most of that legislation is garbage, introduced with no intention of seeing it through to the bitter end.

Some Garbage Bills Are Ritualistic

Lawmakers may introduce the same legislation year after year, passing it on to colleagues as they leave Congress. That's certainly the case with bills to exit the United Nations, which come up in every Congressional session and are basically meaningless — they're not introduced with the goal of actually leaving the U.N., but with the goal of making the base happy.

One of the first things I do when I see legislation that makes me raise an eyebrow is search for it to see how many times it's been introduced. If it comes up again and again, that's a sign that it's probably not worth my energy.

Schoolhouse Rock explains this very well, but the short version is that there are a lot of steps involved between introducing legislation and getting the president's signature. When a bill is introduced, it's referred to committee, where legislators discuss it, suggest changes, and decide whether it should go back to the floor for a vote. This process often includes "scoring," where the Congressional Budget Office takes a look at how much a bill will cost.

Both houses have to go through this process and pass identical bills — or their disparate bills have to go to a Conference Committee that includes legislators from both houses to negotiate the differences and then present the bill again for passage. Each of these steps can present months of hangups.

Here's a dirty little secret: If the person who introduced the bill isn't on the committee it's assigned to, the chances of making it back out to the floor go way down. If you see legislation that makes you go "hmm," check to see which committee it was assigned to, look up the membership, and see whether anyone directly involved with the bill will be on the team of legislators making decisions about it.

Here's a list of the House Committees, and you can find the Senate Committees here.

PredictGov Estimates The Chances A Given Bill Will Pass

If you're a nerd, you should be taking advantage of PredictGov. The site's realtime engine evaluates legislation on the basis of known information about what kinds of laws tends to pass. If an introduced bill is giving you the heebie jeebies and you're not sure whether it's garbage, head on over there to find out whether it's a flash in the pan or the real deal.

Political Climate Can Determine Whether A Bill Moves Forward

If a bill has a lot of majority party support, as with the American Health Care Act, it may be fast tracked — moved quickly through committees and rushed to a floor vote. It's usually easy to tell when this is on the agenda, as you can take a look at scheduled votes and committee actions to see how things are moving.

News of the day also makes a difference — in 2001, for example, the PATRIOT Act was rushed through Congress in response to the September 11 attacks. The legislation had broad bipartisan support because it had a perceived mandate from the American public, which wanted the government to do something reassuring in the wake of a national tragedy. Even big national news isn't always enough without the support of the majority party — look to the failure of gun control bill after gun control bill introduced by Democrats after mass shootings.

You Should Maximize Your Energy When Contacting Lawmakers

Calling about garbage bills isn't a great use of your time — and definitely don't spread panicked social media memes about them. If you're still unsure about whether a bill is garbage, take a look at what political wonks and advocacy groups are saying, or ask!

Calling is best, faxing is a reasonable alternative, and email works as well. Snail mail is also an option, though obviously not great when you need to weigh in quickly. Contacting your legislators on social media doesn't work: Social media is great for encouraging your friends to take action, but lawmakers' staffs don't count comments received on social media, nor do they necessarily monitor closely, especially on the federal level.

How to find and contact your elected officials from your mayor to your representative.

How to track legislation at every step of the way.

Glad we cleared that up.