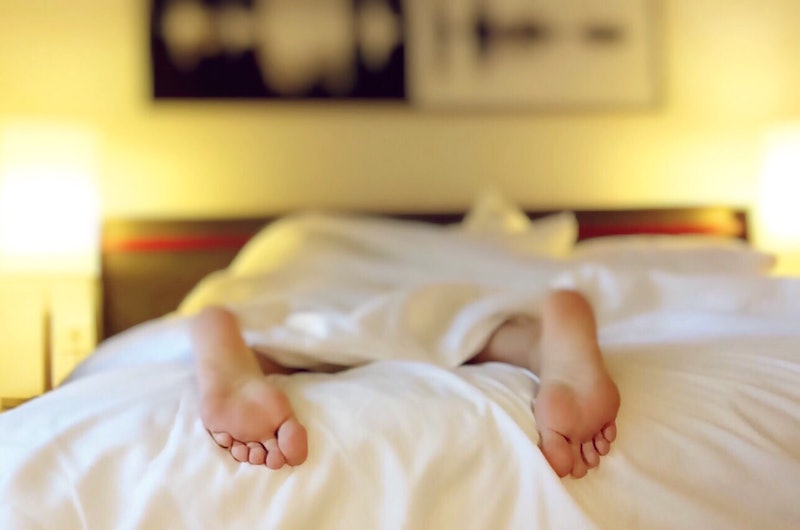 A drink or two (or four) may help you fall asleep as soon as you crawl into bed, but they don't seem very soporific four hours later, when you're wide awake and regretting all the decisions leading up to the hangover you're currently experiencing. If you've ever wondered why you wake up early after drinking all night, trust me — you're not the only one. Aside from being one of the universe's cruelest ironies, it's an actual, documented phenomenon. So what gives?

As you've undoubtedly noticed, alcohol tends to make you so drowsy you'll pass out on any available surface. According to research, a nightcap does help you fall asleep faster; as long as you stick to just one drink, it's been shown to improve sleep quality and duration. The problem arises when you knock back any more than that — after two drinks, alcohol totally disrupts your sleep patterns. In a 2013 paper reviewing existing research, scientists laid things out: As a rule, alcohol makes you fall asleep quicker, and during the first half of the night, it increases slow-wave sleep. Sometimes known as deep sleep, this dreamless stage is associated with memory formation, and it appears to be primarily responsible for reducing sleep need. Basically, after you've had a few drinks, you initially sleep more deeply.

Then comes the second half of the night, which is when people start to experience a phenomenon called the "rebound effect." As sleep researchers Dr. Timothy Roehrs and Dr. Thomas Roth explained in a paper analyzing alcohol and sleep, this effect describes what happens when "certain physiological variables... change in the opposite direction to the changes induced by alcohol and even exceed normal levels once alcohol is eliminated from the body."

Basically, in case you forgot, alcohol totally counts as a drug, and your body has to adjust for its effects — like the production of sleep-inducing adenosine and inhibition of the excitatory neurotransmitter glutamate — when it enters your body. After the alcohol is metabolized a few hours later, these adaptations are now unnecessary, and your body is all out of whack. Needless to say, this can jolt you awake.

Then there's alcohol's well-documented effect on REM sleep coming into play. The stage associated with dreams and learning, REM sleep is one of the most restorative parts of sleep -- and it's reduced by alcohol. Not only are you more likely to wake up thanks to the rebound effect, but you're also missing out on the most restorative stage of shut-eye. No wonder hangovers make you feel the reanimated corpse of a reanimated corpse.

The good news is that a drink or two isn't going to disrupt your sleep patterns too horribly, if at all. If you're planning on drinking more than that, your best bet is probably to avoid pounding back shots until last call, so you can give your body time to metabolize the stuff before you go to bed.

Or just plan for spending the morning wrapped in a blanket burrito watching cartoons while you wait to fall asleep again — it's your call.