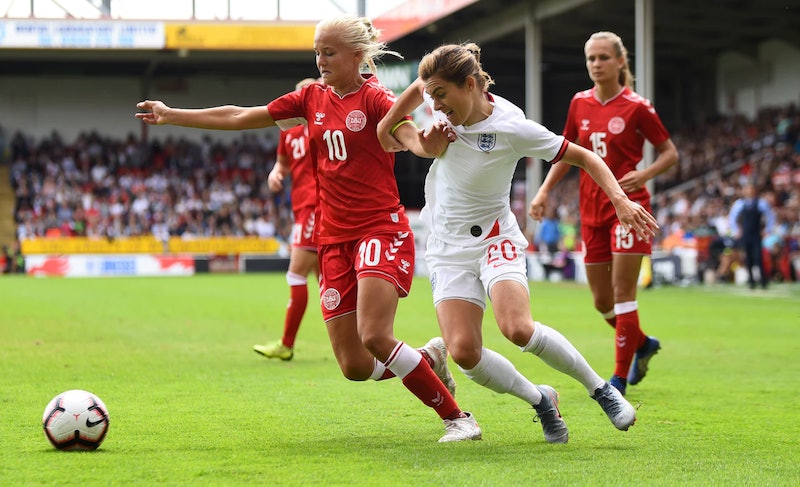 With the World Cup approaching, and the England Lionesses looking stronger than ever, it's easy to think that pride in ladies' football is at an all time high. However, unfortunately, we still have a huge way to go in terms of sporting equality, especially when it comes to football. And nothing makes this clearer than the lack of female footballers profiled on sites such as Wikipedia. Which is why the project which saw Adidas and Wikimedia add more female footballers to the site is especially important.

Journalist Rebecca Myers reported on the project, which seemingly took place today, and saw Adidas team up with Wikimedia (a company that supports Wikipedia) to add more women football players to Wikipedia. Shockingly, only about 3% of female footballers are currently profiled on the website.

Alongside a picture of people working hard at their laptops, Myers wrote:

This is where the magic happens! Only around 3% of footballer profiles on @Wikipedia are women so @adidasUK @wikimediauk are rewriting history today by adding more female footballers past and present.

Before today, the member of the Lionesses with the highest Wikipedia page word count was... Phil Neville. Time to change that! (sorry Phil)

Myers then proceeded to share updates of who was being added and the resources they were using to find the information on the players.

The responses to this new move were overwhelmingly positive, with Twitter users praising the decision.

"This is amazing!!! I am so here for this!! The movement around women's football and sport in general has been ginormous of late. So deserved and better late than never!!!" wrote @Jodieee21.

Although this is excellent news, the sports industry, along with the press and society as a whole, still have a way to go in ensuring women's football is treated with the same respect and admiration as men's.

But bigger moves are being made to address this problem, including Google's new "Offside Museum," a digital museum that accepts submissions relating to the history of women in football. The museum is designed in order to honour and celebrate women's football, and to give them the recognition they deserve. The name relates, of course, to the well-known offside rule within football, as well as the fact that women were largely seen as being "offside" any time they were on the pitch up until recent years. Shockingly, the creation of the Offside Museum reminds us that up until 1979, women were banned from playing football. Rather gross, huh?

As well as these moves, which will undeniably help to bring women's football into the spotlight where it belongs, certain publications are starting to sit up and recognise the sport, with journalists such as Matt Dickinson, Chief Sports Writer at The Times, publishing think pieces about how women's sporting stories deserve to be heard.