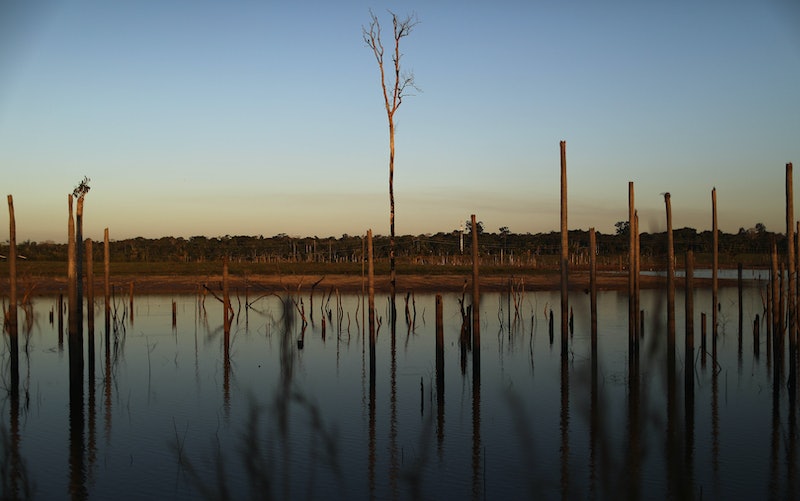 In just 44 years, the size of wildlife populations has declined by a staggering 60 percent on average, according to a new report by the World Wildlife Fund (WWF), and that change is likely due to human activity. The 75-page report is a deep dive into the current state of the natural world, analyzing the populations of birds, fish, reptiles, amphibians, and mammals from 1970-2014 to help estimate the impact of human activity on the world’s ecosystems. Unsurprisingly, considering the landmark climate report released by the United Nations a couple weeks ago, the results were quite bleak.

The report includes a dizzying array of stats: The Earth is estimated to have lost about half of its shallow water corals in the past 30 years, and 20 percent of the Amazon has disappeared in 50 years. Species population size declines were especially noticeable in the tropics — South and Central America suffered an 89 percent loss since 1970 (compared to the overall average of 60 percent loss). The data was measured using the Living Planet Index, which was produced for WWF by the Zoological Society of London. Information on 16,704 populations of wildlife, representing more than 4,000 species, was assessed to estimate the decline in numbers.

The dominant drivers behind the loss in biodiversity were overexploitation of wildlife and the erosion and loss of natural habitats through agricultural activity, which are both linked to humans, the report says. In oceans, overfishing and plastic pollution are continued threats to sustainability, with the destruction leading to declines in freshwater biodiversity. The report closed out with a plea for a global deal that would rethink nature preservation and help diminish this trend of biodiversity loss before it is too late, urging that the time to act is running out.

“We are sleepwalking towards the edge of a cliff,” Mike Barrett, executive director of science and conservation at WWF, told The Guardian. “If there was a 60% [sic] decline in the human population, that would be equivalent to emptying North America, South America, Africa, Europe, China and Oceania. That is the scale of what we have done.”

Beyond losing the wonders of nature, Barrett urged that the loss of will have profound effects on humans, with our health, food and security depending on biodiversity for things ranging from medical treatments to food production. Globally, it is estimated that nature provides services worth around $125 trillion a year. “Nature is not a ‘nice to have’ — it is our life-support system,” he told The Guardian.

But the news isn’t all bad. The report marks 2020 as a critical year when global leaders are expected to regroup and look at the progress made in pacts including the Paris Climate Agreement and the Sustainable Development Goals. And when conservation efforts are made, they can produce results. In India, for example, tiger populations have grown as a result of concerted efforts towards habitat protection.

On an individual level, incorporating lifestyle changes like eating less meat and dairy can help reduce your own environmental footprint. Re-considering some of your consumption habits and where your dollars are being spent can also help — fast-fashion retailers often use unsustainable production models that contribute to the problem. The fashion industry is responsible for producing twenty per cent of global wastewater and more global carbon emissions than all international flights and maritime shipping combined, according to the United Nations Economic Commission for Europe. The textiles industry is also a major contributor to plastic pollution in the world’s oceans, with approximately half a million tons of plastic microfibers ending up in the ocean each year.

Looking at the grim future the report paints isn’t easy. But there’s also actionable ways to combat and help minimize humankind’s impact on the natural habitats we rely on to live. "We are the first generation that has a clear picture of the value of nature and the grave situation we are facing," the study indicates. "We may also be the last generation that can do something about it."