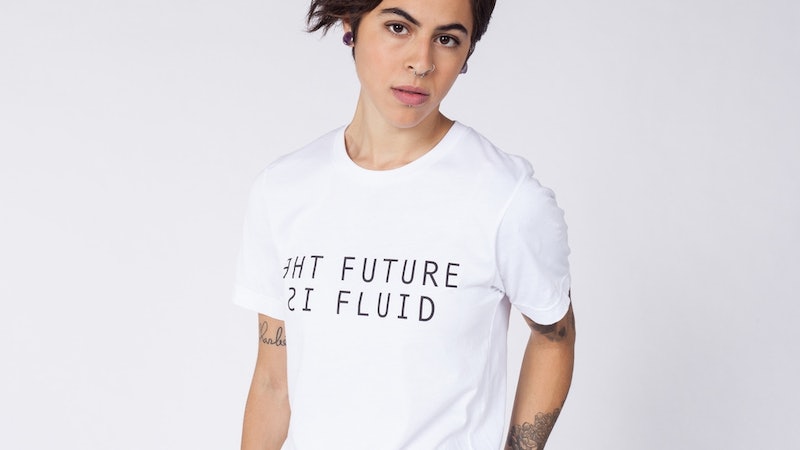 October is LGBTQ History Month in the U.S., but honoring the past wouldn't be complete without celebrating the future. That's where this badass "The Future Is Fluid" shirt comes in to slay the day.

LGBTQ History Month is a time of year to celebrate and reflect on trailblazing activists like Marsha P. Johnson, a fixture of the transgender community who virtually started the queer liberation movement, and Edie Windsor, the lead plaintiff in the Supreme Court case that cleared the path for same-sex marriage in the U.S. But as you pay tribute and learn more about these activists this month, you can also help spread awareness of queer identity with a "The Future Is Fluid" tee from Wildfang. And you can do good at the same time.

In honor of LGBTQ history month, Wildfang has teamed up with openly gay musicians Tegan and Sara to "celebrate the queer community, the end of gender binaries, and the future progress we are building toward" with the collection. The collection, which was designed by Tegan and Sara to benefit their charitable organization, features simple white tees, chic windbreakers, comfy sweatshirts, minimalist pins, and several other items. The most standout item of the collection, however, is the bold "The Future Is Fluid" tee.

The Future Is Fluid Tee, $40, Wildfang

But the slogan on the tee isn't just catchy, it's fact. Research by trend forecasting agency J. Walter Thompson Innovation Group shows that the youngest generation, Generation Z, will likely have the most fluid gender and sexual identity of any generation yet.

It's estimated almost 50 percent of Gen Z identifies as something other than heterosexual. For millennials, that number is only 35 percent. In addition, an estimated 56 percent of Gen Z-ers say they know someone who uses a gender neutral pronoun, such as “they,” “them,” or “ze.” Only 43 percent of millennials can say the same.

When it comes to fashion, 66 percent of Gen Z-ers say they have bought clothing that's not marketed to their sex assigned at birth. This hints at some bending of binaries, even if just a little. Indeed, the future is fluid.

Accompanying the "Future is Fluid" collection is a campaign video, which showcases 20 queer, non-binary and trans individuals who represent non-conformity in their gender identity.

"The future is trans kids knowing who they are, and their parents believing them," the video states. "The future is 'they,' a completely grammatically correct pronoun, and any other words that come to life to help us all get seen."

Watching the video, it becomes apparent that "The Future Is Fluid" is more than a slogan. It's a reminder of where we're headed — and what kind of equality we're still fighting for.

All profits from the collection will go directly to the Tegan and Sara Foundation, which fights for health, economic justice, and representation for LGBTQ girls and women. And the cause is an important one when you look into the community's needs.

For instance, queer women have higher rates of gynecological cancer, depression, suicide, tobacco use, and alcohol abuse than straight women. On top of that, 29 percent of LGBTQ women struggle to afford or get health insurance because of discriminatory laws and insurance exclusions. One fourth of lesbian women also live in poverty, and one in five transgender women has reported being homeless at some point.

With so much discrimination rooted in queer identity, it's helpful to look toward a more inclusive future. And that is exactly what this chic collection encourages.