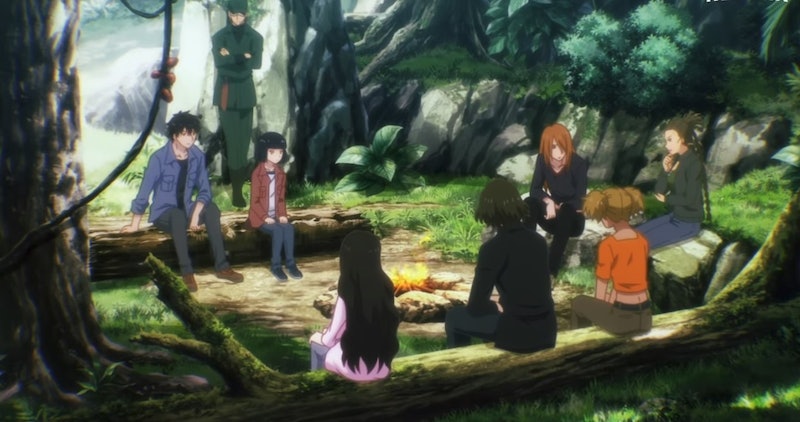 If you like both sci-fi and anime, Netflix's 7 Seeds is basically your dream show. The animated series follows a group of young people who were cryogenically frozen by the government in an effort to preserve mankind. When they awake, they discover a giant meteor has hit Earth and wiped out most of the planet. Now, they must brave the elements in an attempt to survive in a changed world. Of course, it hasn't been announced yet if 7 Seeds will return for Season 2, but there's reason to believe it'll be around for a while, so you can feel pretty comfortable getting invested in the new series.

According to Anime News Network, 7Seeds is based on Yumi Tamura's manga series of the same name, which was published between 2001 and 2017. It's not likely that one television season can squeeze 16 years and 35 volumes worth of story into a handful of episodes, so it's fair to assume the plan is for 7Seeds to be drawn out across not just a second season, but many more to come.

As for what to expect, the show centers around 7Seeds protagonist Natsu, who wakes up in the ocean with seven other people with no idea how they got there or what is going on until they make it to an island where a "guide" explains their circumstances. It's a coming-of-age premise with a twist akin to other Netflix projects like Stranger Things, Dark, and The Society, and the original manga series certainly has a loyal mass of readers who will want to see the live-action version. So who knows, maybe 7Seeds will be a breakout hit for the streaming service.

The 7 Seeds trailer dives into the action a bit more with a glimpse into Natsu's confusing world. She wakes up in darkness and later sits around a fire with her group as an unidentified person simply wishes them good luck on their impossible journey. Natsu reveals to a fellow group member that she feels useless, but that she wants to try to contribute to their survival.

The group then battles new wildlife and muses sorrowfully about how everything (and everyone) they knew before is dead, before one person realizes that, despite the grim circumstances, he's finally become the person he has always wanted to be. Some of them feel freed by the new world while others are afraid that they don't have what it takes to survive. There aren't too many other details revealed in the trailer, but it's just enough to sway both fans of the source material and potential new viewers to watch.

Overall, 7 Seeds has an intriguing plot and a plethora of characters to explore a post-apocalyptic world, but it also has a lot riding on it. Will fans like how it was adapted? Will it resonate with non-fans, too? Will that be enough to warrant more than one season? For the sake of the original story, hopefully that answer is yes, and 7Seeds is able to be brought to life onscreen in its entirety.

More like this
'Stranger Things' Season 4 Volume 2 Trailer Teases New Episodes Coming July 1
By Grace Wehniainen and Gabrielle Bondi
Regé-Jean Page Spoke Out On His Rumoured 'Bridgerton' Return
By El Hunt and Maxine Harrison
Everything We Know About When To Expect Money Heist: Korea Part 2
By Kadin Burnett
Every Song In The Umbrella Academy Season 3
By Kadin Burnett
Get Even More From Bustle — Sign Up For The Newsletter