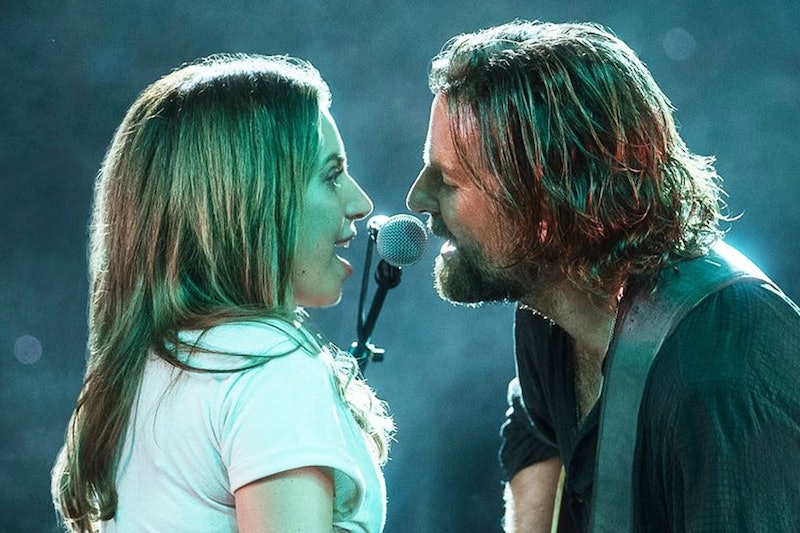 A Star Is Born is so successful that it might be one of those films that remains in cinemas until the tape runs out. However, if you've already seen the film, or even if you haven't, you'll probably want the comfort of watching it in your own home. The Bradley Cooper directed flick, which sees him falling in love with a struggling musician — not so true to life, as she's played by Lady Gaga — is the ideal film to put on for a night in with the girls, but will A Star Is Born come to Netflix?

The film was only released in UK cinemas on Oct. 5, 2018, according to The Telegraph, and since the hype doesn't seem to be dying down anytime soon, my guess is that the people behind the film will want you to keep on buying tickets for as long as possible. So far, it's made over $300 million, according to Box Office Mojo, and that figure seems to keep on rolling.

That means no Netflix 'n' Chill alongside Cooper and Gaga for quite some time, I imagine. Although, just to be sure, I've reached out to a rep at Netflix to see if there's anything in the works, and I'll update once I hear back. Until then, you might want to check out the other versions of A Star Is Born before you're reacquainted with the latest one.

There have been four variations of the film in total — from the 1937 original, which stars Frederic March and Janet Gaynor, through to James Mason and Judy Garland's mega three and a half hour dazzler, to today's. But my personal favourite can be streamed on Netflix right away.

Released in 1976, in the third version of A Star Is Born, Kris Kristofferson plays the lead singer of an illustrious rock band. Not dissimilar to Cooper's reinterpretation, he becomes captivated by the voice of a singer in a downtown bar, as played by none other than Barbra Streisand. It's probably fared the worst with critics overtime — it has a 38 percent rating on Rotten Tomatoes compared to Cooper's 98 percent, possibly owing to its extra cheesy soundtrack, but if, like me, you're into that kind of thing, then this is the Star for you.

William A. Wellman's 1937 original has such great potential for being remade because one, everyone loves the story of a man who discovers female talent and takes the credit for it (*eye roll*), and two, because the film's copyright was sold to Warner Brothers in 1953, according to CopyrightData.com.

That means future remakes are a very real possibility, as this is one cash cow that keeps on milking. So, who knows? Somewhere down the line, I might be writing about whether the 2030 EDM version of A Star Is Born has landed onto Netflix (please, no). Let's at least hope that Cooper's will have come to Netflix by then. Until then, you'll probably still be able to catch it in cinemas.