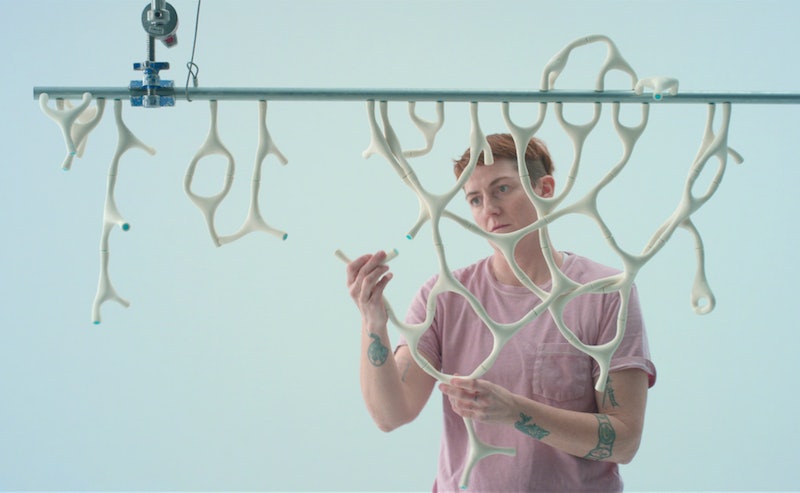 This season of Netflix's docuseries, Abstract: The Art of Design promises to shed light on a ton of designers whose disciplines include typography, costuming, sustainable architecture, and technology, among others. It's certainly a departure from Netflix's usual fare but a welcome one for the art community. And while there's no news on whether Abstract will return for Season 3, it's likely too soon for any renewal news. After all, Season 1 premiered in February 2017, so even if Abstract does return for more seasons, it likely won't be until 2021, if they're following the same production schedule.

The docuseries is executive produced by Scott Dadich (former Wired Editor-in-Chief), Morgan Neville, and Dave O’Connor, per Architectural Digest. Abstract Season 1 was praised by critics, whose first season depicted graphic, sneaker, interior, and stage designers, among others. In the same vein as last time, Season 2 contains six episodes, each of which concentrates on a different designer and their respective discipline. "This season we got the chance to take even bigger swings at essential questions about the nature of creativity," Morgan Neville said in a statement, per AD. "I can't wait for people to discover it."

Here's where audiences may have seen the Season 2 subjects' work before, some of which people use every day.

Eliasson is a Danish-Icelandic sculpture and installation artist whose recent work — titled "Human time is movement" — involves a series of interactive, metal installations. He explained the concept behind these pieces in the above Instagram post, saying it's "a series of sculptures based on the mathematical concept of the Clelia curves. Clelia Curves were discovered in 1728 by the mathematician Guido Grandi, who named them as a tribute to the countess Clelia Borromeo. These curves are obtained by two simultaneous rotations: a point on a sphere's meridian rotates at a constant speed, while, at the same time, the sphere itself is also rotating at a constant speed around its axis."

"Design at the Intersection of Technology and Biology" — Neri Oxman

Dr. Oxman is an Israeli-American designer and tenured M.I.T. Media Lab professor known for her 2015 TED Talk, which has over 2 million views. It's not just that she designed a mask for Björk and received the 2018 Cooper Hewitt Interaction Design award, but she's dedicated to creating sustainable designs. According to the New York Times, Dr. Oxman coined the term material ecology, which marries functional design with sustainable materials. "We treat design more like a gardening practice," she told the Times.

And while she seems to dabble in a bit of everything from fashion design to biology, she has grand plans to revolutionize the world of architecture — "to transform the methodology of building," as her mentor, Moshe Safdie, told the Times. "Today we have materials that are translucent and we have materials that are load bearing, and [Dr. Oxman] is hoping we would reach the day when we have materials that could behave in multiple ways. Release light and store energy." Audiences can also look forward to 2020, when the MoMA will be staging Dr. Oxman's mid-career retrospective, per Architectural Digest.

If Carter looks familiar, it's because she gave a rousing speech at the 2019 Oscars, where she won Best Costume Design for her work on Black Panther. "Marvel may have created the first black superhero, but through costume design, we turned him into an African king," she said in her acceptance speech, per the Hollywood Reporter. "It's been my life's honor to create costumes."

Previously, Carter was nominated for her work on Malcom X and Amistad, and her Oscars win made her the first black woman to win in that category, per THR. "Ryan [Coogler] and the rest of the team wanted the costumes in the film to feel as authentic to continental Africa as possible, while also expressing the technological superiority of Wakanda," Nate Moore, a producer on the film, told the New York Times. Obviously, Carter perfectly threaded that needle and was recognized for her flawless work.

Holman is a toy designer who founded the company Heroes Will Rise, per her website. "These materials [in Holman's toys] are manipulable parts and pieces which inspire constructive play, imaginative forms, and cooperative interactions between people," her bio reads. "Abstract in their identity, these tool/toys inspire children and adults to imagine the origin and story of the toy as well as how to use it."

Her project Rigamajig was a collaboration with Friends of the Highline. "[The Rigamajig is] fun! Kids run and reach and hold and scoot without even noticing," Holman said in an interview with KaBOOM! "Some of the parts are intended to be too big for one child to use alone. They have to help each other lift and attach and move things. They have to share resources."

Ever heard of Instagram? Then you're familiar with Spalter, who used to be the tech company's head of design. He stepped down from the position in May 2019, per Fast Company, to help lead Japan's Instagram office. During his tenure, however, Spalter introduced the new Instagram logo to the more abstract, colorful icon that it is today, per the article, and launched Instagram Stories in 2016. According to another Fast Company piece, one of the things the design team wrestled with was whether or not to make the Instagram Stories icon circular or square. "I just started here," Spalter recalled thinking in the 2017 article, "and now you’re breaking everything?" Fortunately, it seems like things turned out well for Spalter and the rest of his team.

While those unfamiliar with design — or specifically typography — may not know Hoefler by name alone, they've certainly see his work before. The font Gotham was designed by Hoefler and his former creative partner, Tobias Frere-Jones, in 2000, per the Outline, which Shepard Fairey would then use in his design for Obama's 2008 campaign posters.

Although the two men had a falling out in early 2014, per Fast Company, Gotham is still arguably their crowning achievement. According to the New York Times, Hoefler founded Hoefler Type Foundry in 1989, and Frere-Jones joined the company ten years later. The company's name was changed to Hoefler & Frere-Jones in 2004, the article reported. Today, it simply goes by Hoefler & Co, which boasts fonts like Didot, Whitney, and Mercury (which was designed for the men's magazine Esquire). The Carters used Hoefler's font, Ringside, on the cover of their joint album, Everything Is Love.

So while there's no news yet on Abstract Season 3, audiences will have plenty of time to research their favorite artists from the current season.