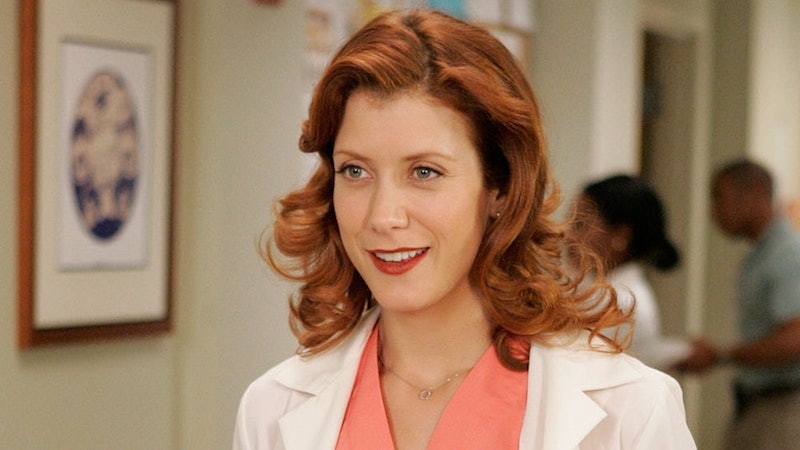 When a show's been on the air as long as Grey's Anatomy, it's understandable for fans to want to see members of the original cast come back for a visit every now and then. And now, thanks to a recent fan theory, there seems to be a solid chance that Addison will return to Grey's Anatomy at some point in the very near future. Portrayed by Kate Walsh, Addison first appeared on series during the Season 1 finale, revealing herself to be Derek's wife — a fact that came as quite a shock to Meredith, who had no idea about his marital status.

From then on, Addison became an intregal part of series and even went on to star in her very own spinoff show, Private Practice. And it's due to that connection that allows for her possible return to make total sense. Amelia Shepherd served as one of the lead characters on Private Practice alongside Addison and allowed for the two of them to grow extremely close. So now that Amelia is pregnant, many viewers are hopeful that this could easily justify a surprise pop-in from Addison, who would understandably want to check in on her friend and possibly even help with the baby's delivery.

Back in August, showrunner Krista Vernoff teased to TVLine at the Television Critics Assoc. summer press tour that she was attempting to bring a familiar face back to Grey's Anatomy, though she didn't specify who it would be. “I’m trying to get someone back,” Vernoff said at the time. “There’s someone I’m hoping will make an appearance this year, [but] it’s a real maybe. I’m trying.”

Naturally, fans are eager to learn who it will be, but now thanks to Amelia's pregnancy storyline, Addison seems like a logical choice. Adding further fuel to the speculation fire, Walsh herself recently told PopCulture.com back in October that she'd be very interested in returning to the show if the right opportunity presented itself. "If it's the right time and the right storyline, yes," Walsh told the outlet. "I always considered Shondaland my home, and particularly Grey's. That's where it was just a big important piece of my life, and I love everyone involved on the show. So, absolutely I would go back if it made sense to everybody involved — yes."

However, when the conversation turned toward Vernoff's recent remarks about a beloved character coming back, Walsh played coy and refused to confirm or deny her involvement in the matter. "Oh no, I can't say anything. I couldn't. It's like Shondaland, it's serious business," Walsh stated. "I am sworn to secrecy for real."

Those remarks seem rather telling in and of themselves, but for the time being, all fans can do is sit back and wait to see what happens, though the odds of Addison scrubbing back in have never seemed higher.