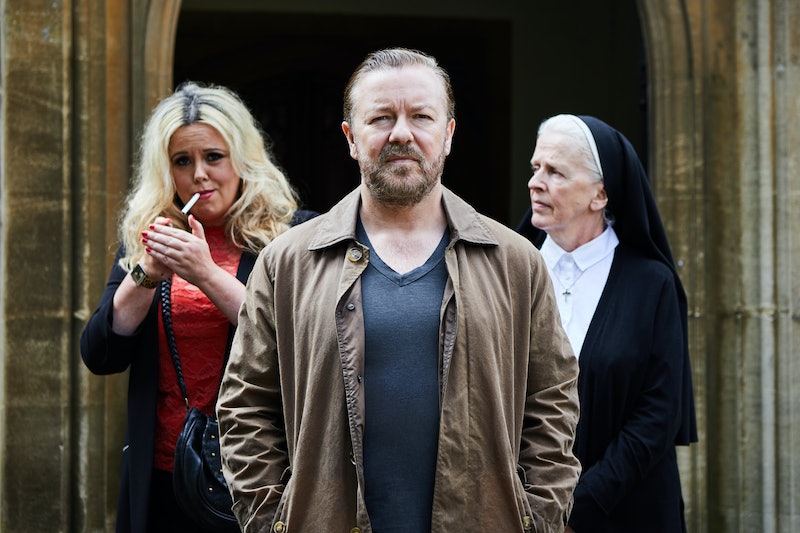 Ricky Gervais returns to Netflix this week, but this time, not with a standup special. His new comedy series, After Life, premieres on March 8, and finds Gervais reuniting with some familiar faces from his past projects. As has become typical for Netflix, any decision regarding an After Life Season 2 will probably be made after the series debuts and execs can see how it's received by viewers, but the show has already attracted some promising buzz.

Update: After Life has been renewed for Season 2, Netflix confirmed in a press release.

Earlier: One in a string of recent existential comedies, After Life focuses on Tony (Gervais) as he struggles to deal with the death of his wife, and according to Netflix, "is trying to punish the world one savage put-down at a time." Initially, that description — or maybe just Gervais himself — sparked some negative attention. The comedian has tackled a broad range of roles throughout his acting career, but the brand of "savage" humor he often leans into — sometimes seeming offensive for the sake of being offensive — isn't everyone's cup of tea.

When news of the show broke, some were skeptical for those reasons. Reddit user MrCaul wrote that the premise sounded like "an excuse for Gervais to continue his obsession with outrage culture and people getting offended," and another user, lanternsinthesky, predicted "lazy and uninspired commentary on religion."

However, the show actually seems to be quite the opposite. The Radio Times' Ben Allen, wrote that it's exactly what viewers won't be expecting, asserting that After Life "is not the political correctness-skewering plot device that many feared it would be." He went on to praise the "brilliant" supporting actors and said though the emotional notes don't pack the same punch as the comedy for him, "there is a lot to enjoy here in this concise, sub three-hour" marathon.

Forbes' Merrill Barr also noted that After Life's tone is a bit of a departure from what people might be expecting from Gervais. "The fascinating thing about After Life is it manages to be sweet and charming while being funny - which is not something we've come to expect from creator and star Ricky Gervais in recent years," he wrote.

And Entertainment Weekly's Kristen Baldwin is another who enjoyed both Gervais' performance and the series as a whole. "Gervais, who writes and directs every episode, delivers a conclusion that's fully expected but completely satisfying," she continues. "At a time when so many TV series wear their phony complexity with pride, After Life is a simple, wonderfully entertaining reminder of how easy it can be to choose kindness."

Despite the fact that Gervais has moved on from beloved hits like the UK version of The Office and made a career for himself out of polarizing comedy, After Life's future seems brighter than fans might have expected. If reviews continue this way, a second season wouldn't be out of the question. This might be the start of a new era for Gervais — one that hopefully promotes joy and thoughtfulness rather than trying to rile people up.