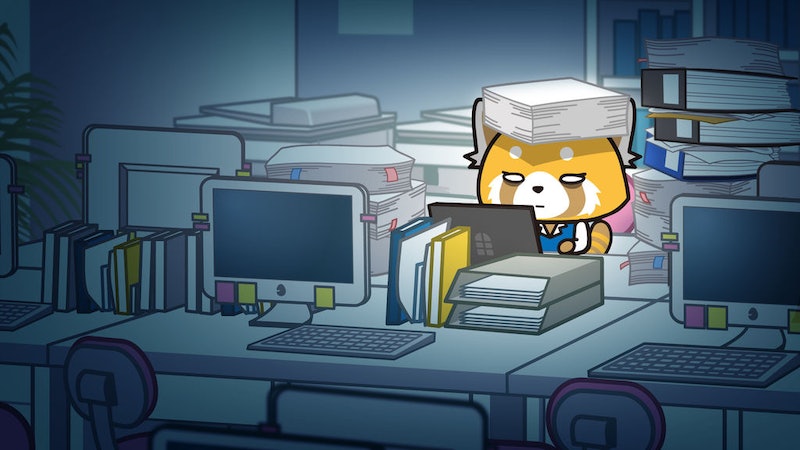 What if I told you that Sanrio, the Japanese company behind Hello Kitty, had a show coming to Netflix? And what if I told you that the series' protagonist was an adorable red panda who sang death metal karaoke by night? Well, I am telling you and this series is just as unique as it sounds. Titled Aggretsuko, the show premiered on April 20 on Netflix and follows Retsuko, a red panda trying to hack it in corporate Tokyo who also loves to sing death metal. But, if you burn through the first season ASAP (and who wouldn't with a premise like that?) you'll want to know if Aggretsuko will return for Season 2.

Although it's too early yet to know if there will be a second season — Season 1 was only just announced in December 2017, per PR Newswire — it looks like Retsuko's relatability has already struck a nerve. So, if it were to return, it would likely be in about a year, per Netflix's usual release times.

In the meantime, people are already excited about what episodes there are now. Not only is there an Aggretsuko Hot Topic collection filled with adorable merchandise, but early reviews of the show have been enthusiastic. For The Nerdist, Jenn Fujikawa said: "There were times during the episodes I laughed — no, loudly cackled — at scenes that seemed directly lifted from my own office experiences."

Retsuko describes herself in the Netflix trailer as, "25 years old and single. A Scorpio, blood type A." Her stressful job as an office associate at a soul-sucking company, where her superiors seem to take delight in criticizing her tea-making abilities, leaves her severely pissed-off. So she turns to karaoke to cope with the stress, as you do.

In fact, Aggretsuko's anger seems to be her biggest draw. "In a society which puts a lot of value on politeness, you don't often see people expressing raw emotions in public," the BBC's Mariko Oi explained of Retsuko's karaoke pastime, "and the Japanese language doesn't have equivalents to the everyday profanities you might hear muttered at work in English."

In fact, the same BBC article explained that the idea for the character was inspired by Japan's work culture. Aggretsuko's designer, who goes by the pseudonym Yeti for anonymity, told the BBC, "I observed office workers who are at the centre of Japan's corporate culture and I could hear their heartfelt screams." This dark theme is certainly a departure from Sanrio's usual bag, but it seems like their gamble paid off.

And especially when other Sanrio properties are so unapologetically cute, it's refreshing to see a woman — er, red panda — in her 20s with an unconventional hobby and unruly emotions portrayed on TV.

And this hit home for a 30-year-old sales assistant named Kazumi, who told CNN, "We face situations that Retsuko experiences a lot at our office. It's a typical Japanese culture trend, for both gender[s] but especially girls, as we can't say 'no' to [our] boss and to our colleagues."

In other words, there has to be a release from the societal pressures — especially those facing young women — in Japan. For Retsuko, that's death metal karaoke.

Although Aggretsuko was actually developed back in 2015, per L.A. Weekly, it wasn't until January 2017 that Sanrio's Twitter posted an introductory video about the character. Aggretsuko joined the ranks along with Hello Kitty (of course), Gudetama, a lazy egg yolk with ennui, and Tuxedosam, a penguin who loves eating.

Viewers actually learn some things from the OG video that aren't revealed in the Netflix trailer, such as the names of two coworkers: Director Gorilla and Secretary Washimi. Fans are also introduced to a hippo who loves mocking Retsuko and showing her pictures of his nephew, albeit against her will. Hopefully these characters will feature in the show — especially Director Gorilla and Secretary Washimi, who seem vaguely sympathetic to her plight. Now, if I could only just get a Netflix series on Gudetama too...

More like this
The ‘Kevin Can F**k Himself’ Season 2 Finale Twist Is A Full Circle Moment
By Grace Wehniainen
Watch The Thrilling Teaser Trailer Of 'Shadow And Bone' Season 2
By Gretchen Smail, Jack Irvin and Sophie McEvoy
'The Rings Of Power' Episode 7 Will Feature An “Unlikely Pairing Of Characters”
By Grace Wehniainen
These Memes & Tweets About Alicent in 'House Of The Dragon' Prove She's The Queen Of Messiness
By Grace Wehniainen
Get Even More From Bustle — Sign Up For The Newsletter