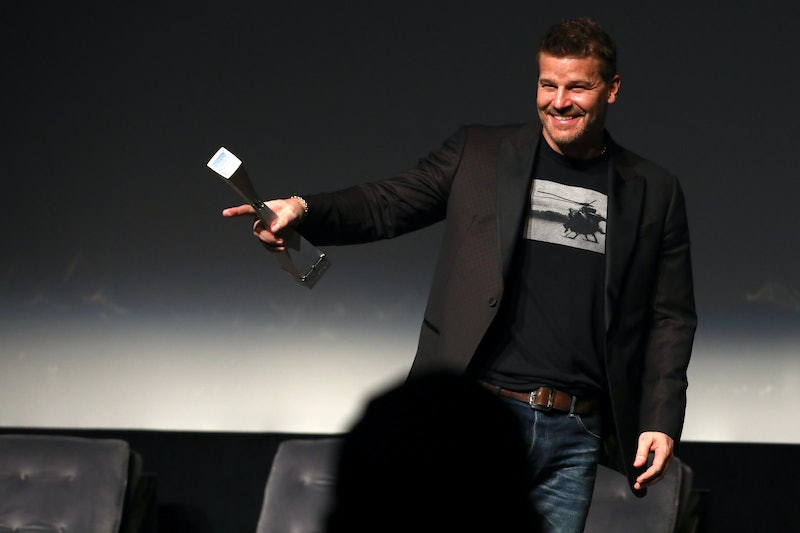 Buffy the Vampire Slayer may not be the only show in Joss Whedon's supernatural television franchise to come back from the dead. While appearing on The Talk Tuesday, March 19, actor David Boreanaz teased that an Angel revival could happen in the near future as a way to help commemorate the spinoff show's 20th anniversary. Of course, he was pretty cryptic when it came to divulging any specific details on the matter, but it definitely leaves the door open for several possibilities.

“We’re coming up on our 20 years,” Boreanaz stated during the interview. “That’s amazing to have been blessed with a show like that. That’s really where I started my gig in this acting world." That's when the former Buffy star decided to drop some clues that some sort of reunion was in the works that may potentially involve a reboot special. "I love that character," he added. "So I will say there may be something coming up. I don’t want to give away a lot. It’s 20 years coming up this fall, and we may have something in the works."

Granted, that's not enough to be a direct confirmation that a revival will occur, but it certainly sounds like the cast is cooking something up for the monumental occasion. TV Guide suggested that it could be a reunion panel at the annual ATX Television Festival — a theory that seems to be backed up by a recent tweet former Angel star Charisma Carpenter posted back in February.

Then again, it might end up being something else entirely. A full-blown series revival may be too much to ask for, but it's definitely too early to rule the possibility out entirely, especially since TV reboots and revivals are proving to be very common these days, so never say never.

As most of you already know, Angel served as a spinoff of Buffy back in 1999 and centered around Buffy's former love interest, Angel (hence the title). The show ran for a total of five seasons and featured the likes of Boreanaz, Carpenter, Alexis Denisof, J. August Richards, Amy Acker, James Marsters, and Mercedes McNab, just to name a few. Whether or not all of these people will be part of this mysterious project remains to be seen.

For his part, Boreanaz has always spoken very highly of the show, and voiced his support about the upcoming Buffy reboot at New York Comic-Con last fall. “Come on, guys, it’s a good thing,” he stated at a panel, as reported by TVLine, adding:

“Let’s just embrace [it]. I’m very happy for them. They want to embrace a new generation, something new. … Everybody wants old, they want to go back, which I can understand. You want to see us back in these roles. It’s great, it’s cool, [but] things move on, stories evolve, times change. I think it’s a great opportunity for a reboot like this to show where we are with society now, what you can do with technology. How you can explore those relationships with the same kinds of metaphors. I’m all for it. I think it’s fantastic. Good for them. I hope that it becomes huge and successful, and does what it does."

Boreanaz even went on to say that he'd also be totally cool with someone else getting recast as Angel for it. “If someone can step in my shoes and play my character, f*ck, go ahead!” he added. "I think that’s great, because I ain’t putting on that makeup anymore!"

Perhaps he's had a change of heart since then and this upcoming milestone has left him willing to reprise the role (and don the makeup) once again, even if it's just for a little while.