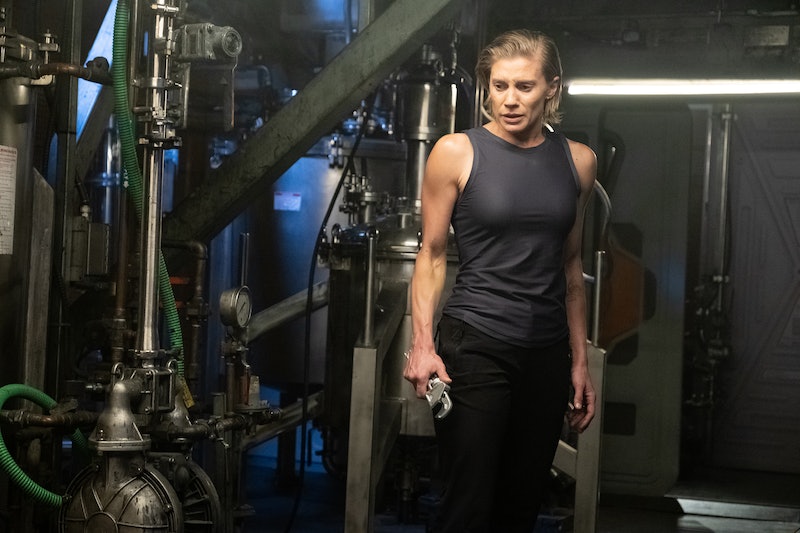 In Netflix's Another Life, Niko Breckinridge (Katee Sackhoff) and her intrepid team of explorers venture into space to investigate the origins of a mysterious alien artifact that lands on Earth, only to face unimaginable dangers. It's yet to be announced if Another Life will return for Season 2, but hopefully, their journey isn't over as soon as it's started. It may not be the most imaginative premise, but it does have a little something for every sci-fi fan.

Update: Another Life has been renewed for Season 2, according to The Hollywood Reporter.

Earlier: There's a lot going on in the show from the first episode onward, but once you settle in for the ride, it's easy to follow. That's largely due to the fact that it feels like a lot of other similar stories rolled into one. It begins with an event similar to the one that kicks off 2018's critically lauded Annihilation: a spaceship lands and turns into a mysterious sparkly structure on the edge of a forest. While astronaut Niko Breckinridge leads a team to investigate á la Alien in space, her husband Erik Wallace does his own version of Arrival on the ground with a team trying to communicate with the ship.

There are also some familiar concepts within the pilot alone, from The Martian, Close Encounters Of The Third Kind, and really any show about spaceship crews on dangerous missions to Star Trek, Lost in Space, and even Battlestar Galactica, which also starred Sackoff.

The biggest difference (besides the fact that we're used to seeing a man leave his wife to go to space, and finally this is the other way around) is that this show is on Netflix, and there's a lot more cursing than is typically found in sci-fi fare. Niko's millennial crew is not afraid to voice their concerns using colorful language, but nobody on Star Trek would dare yell at Commander Data the way they yell at Another Life's anthropomorphized computer, William. The series is basically taking all the stuff you love about sci-fi classics and making them a little bit edgier and modern.

Looking at the trailer for Season 1, there are even more tropes and homages to come in later episodes. Big scary alien bugs? Spooky skeletons? The word interstellar? It's a new story with fresh twists on the staples fans want to see.

The fact that Niko's crew is, on average, 10 years younger than her also sets this show apart, but series creator Aaron Martin is no stranger to YA stories. One of his first writing gigs was Degrassi: The Next Generation. He also created The Best Years and the Canadian anthology thriller Slashers.

As for Another Life's renewal prospects, Martin definitely knows how to keep a story going for multiple seasons... and there are so many twists and turns at the beginning of Another Life that the ending is sure to leave audiences wanting more. Netflix also has a seemingly good working relationship with Sackoff, who previously starred in the canceled-series-turned-Netflix-original Longmire. The cards are in order for this show to be get a second season — all they need is the marching orders!