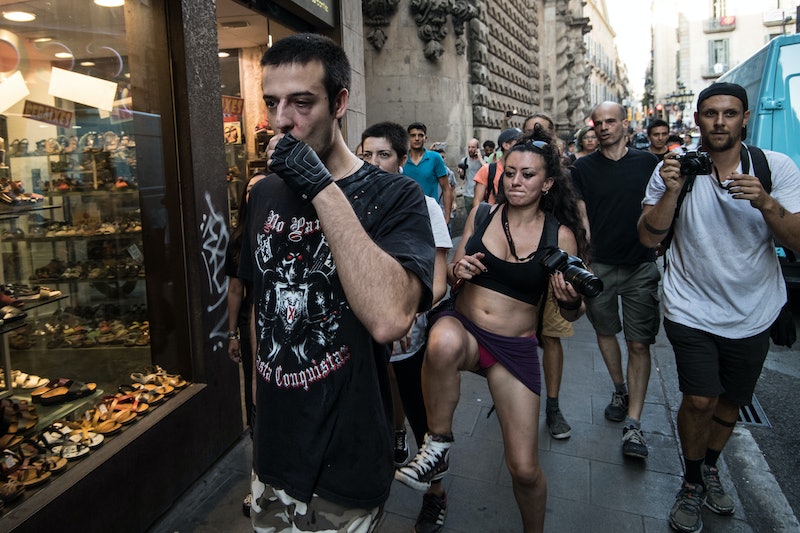 The group featured prominently at the Charlottesville counter-protest last Saturday, and is expected to make an appearance at the Boston rally, too. Antifa has been at the forefront of counter-demonstrations organized against right-wing marches across the country. At the first "free speech" rally back in May at the Boston Common (where Saturday's rally will take place as well), Antifa organized a counter-protest. Although police made several arrests, the two groups largely stayed on opposing sides of the park, reportedly chanting and calling each other names.

The group has encouraged members in their Facebook group to show up to the Boston Commons for Saturday's Free Speech Rally with the intention of disrupting the event. Its members often attach themselves to counter-protests organized by groups like Black Lives Matter or the ANSWER Coalition. These groups are not connected to Antifa and have recently said they do not agree with Antifa's violent tactics. Black Lives Matter and Boston's local chapter of ANSWER Coalition have organized counter-protests with more than 10,000 registered attendees on Facebook.

On Facebook, the Boston chapter of Antifa shared an image detailing the various different symbols it associates with far-right groups. "Learn to identify these symbols and let anyone displaying them know that they are not welcome in our city! Boston is an anti-fascist zone!" states the image.

The Boston police department is going to extreme lengths to keep the peace during the rally. In a press conference Friday morning, Boston Mayor Marty Walsh encouraged residents of the city to stay away from the Commons on Saturday afternoon. The police have set up concrete barricades throughout the Commons, as well as security cameras, aimed at keeping the two sides of demonstrators away from each other. The police are reportedly deploying 500 officers to the rally.

In a livestream (no longer available) posted to Facebook on Friday night, a Boston Antifa member identifying himself only as "Kermit Frogkin" encouraged viewers to "confront fascism," adding "we'll see who really really has the guts at this rally."

Saturday's "Boston Free Speech" rally is undoubtedly shaping up to be a controversial event with the presence of antifascist activists like those that make up Antifa adding to that.

More like this
6 Organizations Fighting Police Brutality That You Can Support Right Now
By Syeda Khaula Saad and JR Thorpe
How To Help Those Affected By The Turkey-Syria Earthquake
By El Hunt
This Is When Netflix Is Going To Start Charging You For Sharing Passwords
By Darshita Goyal
Here’s Where The NHS Nurses’ Strike Currently Stands
By Sophie McEvoy
Get Even More From Bustle — Sign Up For The Newsletter
From hair trends to relationship advice, our daily newsletter has everything you need to sound like a person who’s on TikTok, even if you aren’t.