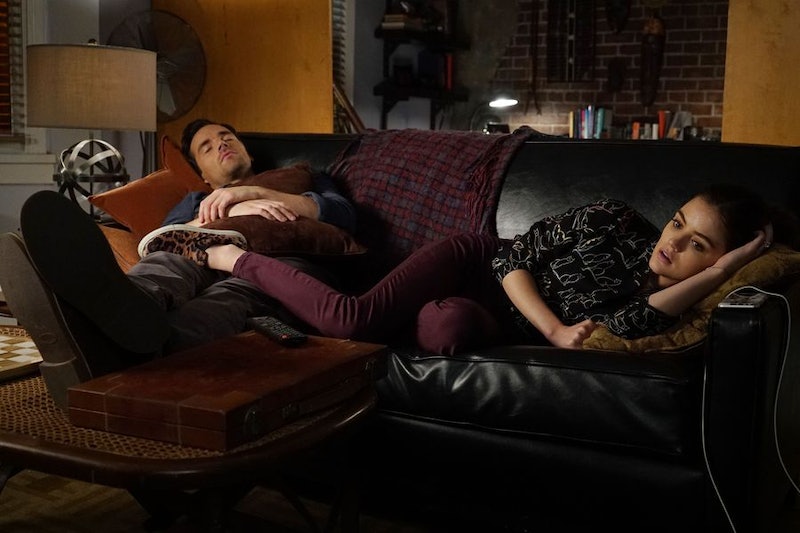 I have to admit that I don’t really know what kind of game Aria is playing here on Pretty Little Liars. She’s working on the A team with A.D. to protect herself and I guess Ezra and the rest of the Liars squad, but I don’t think that Aria really knows what she’s doing. Aria is out of her element, and everyone who sees something weird about this knows it. She even knows it! Mona or even Spencer can handle a nefarious deed, but Aria? I don’t know. Will Aria get caught on Pretty Little Liars? Everyone is on her tail.

Aria’s first gig for A.D. was destroying Emily and Alison’s baby nursery, and she really did it. She smashed that room up! But when the Liars were surveying the damage, Lucas gave Aria a look that said, “Oh, I know you’re up to something, girl.” Previews for the next episode show Aria in a panic surrounded by police cars, as well as a black hoodie-wearing Aria being confronted by all of the Liars. Does anyone think that Aria is going to mess this up? Because I’m pretty sure that Aria is going to mess this up. She just doesn’t have the stomach for this sort of thing.

This is why I’m convinced that Aria can’t handle this sort of espionage — she has a conscience. But Aria is headed toward the slaughter, and A.D. is pushing her there. Aria isn’t smart enough to get out of this mess, and since anything can happen in the last few episodes of Pretty Little Liars ever, I’m not sure that Aria will make it out alive from all of this. Or at least with all of her friends.