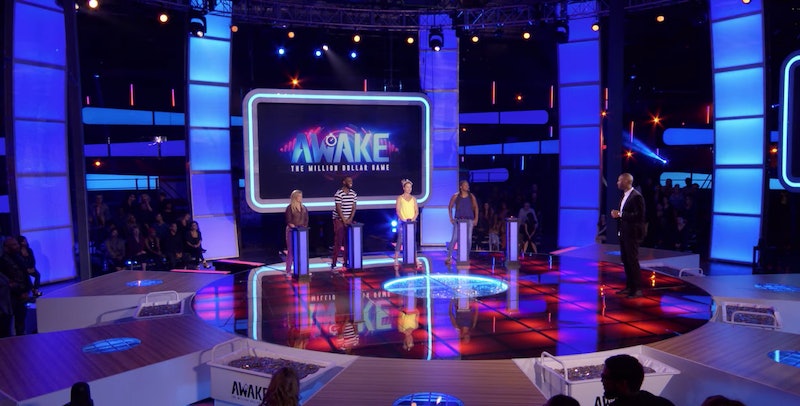 Netflix has revolutionized the way that people watch television, allowing people the opportunity to stay up late for hours and hours on end watching whatever the platform has to offer. The platform carries hours and hours of comedy, drama, and reality shows but so far hasn't had much in the way of classic game shows. Awake: The Million Dollar Game could change that, however, making Netflix a game show destination. There's no word on whether or not Awake: The Million Dollar Game will return for Season 2, Netflix has plenty of game shows available for viewers to take a look at once they've finished watching Awake.

While most television shows may advise against staying up for hours and hours on end Awake: The Million Dollar Game celebrates the marathon watchers of the world by proving that even people who have stayed up twenty-four hours straight can overcome their exhaustion to win a million dollar grand prize. The challenges that the contestants face may be simple to the well-rested mind, but the fun of the show comes from watching people fumble their way through complicated game show obstacles while yearning for a nap.

The other shows on Netflix may not feature the inventive set-up that Awake has, but these shows could provide a salve to anyone looking for a game show that is heavy on challenges.

Minute To Win It

If Awake: The Million Dollar Game is about people who are asked for too much of their time to compete, Minute To Win It gives people similarly simple tasks and gives people too little time to complete them. While Minute To Win It lacks the sleep exhaustion that defines Awake, the challenges share a similar simplicity and creativity that prove to be engaging even if the contestants are well-rested.

Flinch doesn't provide people with challenges to overcome as much as it puts peoples through endurance tests. Contestants are placed into circumstances designed to make people flinch, and whoever flinches the least earns a special designation at the end of the episode. There isn't a prize for doing well on Flinch aside from bragging rights, but if you enjoyed the physical exhaustion that Awake asks of its contestants then you may enjoy seeing the contestants of Flinch volunteer themselves for deeply uncomfortable trials.

Jeopardy! doesn't ask much of its contestants when it comes to feats of physical prowess, but if you're looking for a game show to get lost in on Netflix then you're not going to find anything as expansive as Jeopardy!. Netflix currently has 45 episodes of the long-running game show series available for streaming which serve as a perfect outlet for anyone who wants to watch a game show they can play along with.

Netflix's roster of streaming game shows is currently fairly limited, but the platform seems to be entertaining the idea that subscribers are interested in watching competitions that resolve after half an hour and start all over with brand new contestants at the top of each episode, just as game shows were when television was just starting out. There may not be another game show quite like Awake, but the show could return for a second season if Netflix feels that investing in game shows will be rewarded with a devoted audience for such shows.