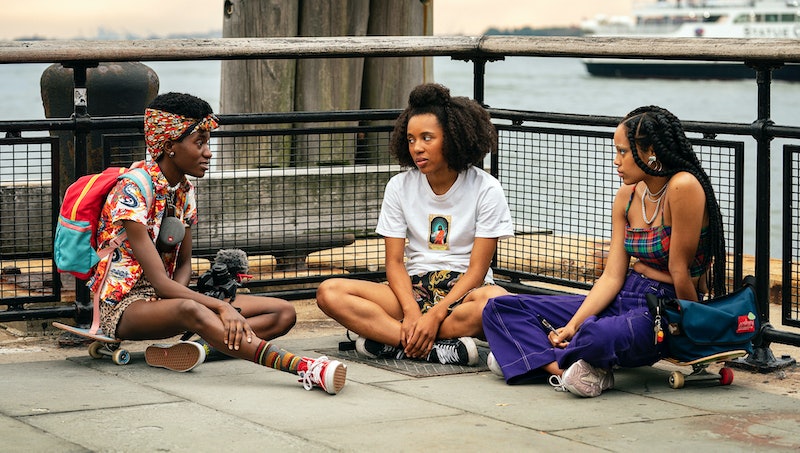 Update June 18, 2020: HBO has officially renewed Betty for a second season. Our original post appears below.

Although Crystal Moselle's new HBO series — a spin-off from her 2018 film Skate Kitchen — is drawing to a close on Friday, June 5, there's no word on whether Betty will return for Season 2. The series was first announced in August 2019 and premiered in May 2020, so if it is picked up for more episodes, Betty Season 2 would likely be released sometime next year. Then there's also the fact that Betty is heavily inspired by its cast members' lives, so it's unclear how long it will take for the writers (and actors) to find more story inspiration.

Make no mistake: The cast of Betty are all playing characters, but many of their personality traits and often certain plot points are biographical. "The stories are definitely inspired by their situations but also inspired by situations that the writers have gone through," Moselle told MTV News, explaining that a #MeToo plot point came from the writers room. Then there's Moonbear (the actor), who went vegan for 2018, while Honeybear (the character) goes vegetarian for a year. Ajani Russell's character, Indigo, goes to a modeling gig in Episode 5, where the girls are asked to embody racial stereotypes.

This, unfortunately, happened in real life, too. "I got to the location where we were shooting. They were going to put this nasty ponytail on me and not brush my edges," Russell recalled in an interview with Thrillist. "I was like, 'I'm not shooting this. Are you dumb?' I was just really infuriated and angry tears started falling. The hair stylist was like, 'You don't have to do this.' I was like, 'You're right! I'm leaving!'"

This blurring of real life and fiction was thanks to Moselle, who invited the girls to help craft their characters. "I was super inspired by the process of working with your talent and your subjects and creating something together," the Betty creator told W Magazine. "That's where I felt like, 'I really want to collaborate with these girls, not document them.'"

Indeed, Rachelle Vinberg, who plays Camille, told Thrillist that Moselle is "so involved in [their] lives that [they] talk to her like a friend." She continued, saying, "We'll just be telling her about something that happened casually, not even with the intention that this is going to be in the show. But then sometimes we'll be like, 'This thing happened recently, and you should hear about it because it's crazy.' Then she'll take notes on it."

However, there are some differences between the girls are their onscreen counterparts. "I would probably never wear most of the outfits that [Indigo] wore," Russell told Thrillist of her character. "Her personality traits are like me, but her circumstances and her style is not. The only thing that really translated was my love of anime. The Goku [from Dragon Ball Z] shirt she wore, I liked."

So should Moselle and the Betty cast choose to do a second season, their characters are already well established. Let's hope they get the opportunity.

More like this
The 'Gossip Girl' Reboot Creator Is “Looking For A New Home” To Air A Potential Season 3
By Brad Witter
'That '90s Show' Is Officially Coming Back For Season 2
By Gretchen Smail and Grace Wehniainen
The Plane Crash In 'Dear Edward' Is Based On A 2010 Tragedy
By Grace Wehniainen
A 'Terminal List' Sequel & Spinoff Are Reportedly In The Works
By Kadin Burnett and Grace Wehniainen
Get Even More From Bustle — Sign Up For The Newsletter
From hair trends to relationship advice, our daily newsletter has everything you need to sound like a person who’s on TikTok, even if you aren’t.