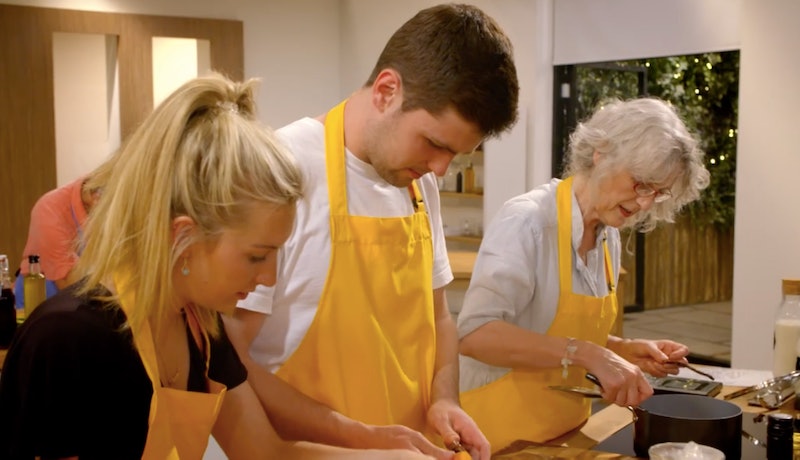 If you're a fan of Great British Bake Off , you've probably already developed a similar love for the young BBC Two show Big Family Cooking Showdown. Its first season premiered in August 2017 and was hosted by GBBO fan-favorite and Season 6 winner Nadiya Hussain. Unfortunately, Hussain will not host Season 2, according to BBC, which lands on Netflix on Feb. 22 — she moved on to host her own show on BBC Two called Nadiya’s Family Favourites, which will hopefully find itself on Netflix in the future. The show's original judges, Giorgio Locatelli and Rosemary Shrager, will also be absent from the new season. If Season 2 looks this different, who knows what could be in store for a Big Family Cooking Showdown Season 3.

New shows often have to make structural changes as they grow and adapt, so there's a chance it will find its footing with new hosts Angellica Bell and Tommy Banks in preparation for a solid future, but for now, a Season 3 is not yet official.

Hussain enjoyed filming Season 1, and told Mirror that she wishes the team the very best. "I really enjoyed presenting, but I’m now focusing on getting back to my own love of cook­ing for my new series, and looking forward to other exciting projects," she said.

New hosts Bell and Banks are each acclaimed food professionals in their own right, so they're sure to bring a new and exciting dynamic to the show. They will also judge the competition together. According to a BBC press release, Bell is a British TV presenter and past winner of Celebrity Masterchef, and Banks was once Britain's youngest ever Michelin starred chef. He's also the founder of The Black Swan in Yorkshire, England.

Its host and judges aren't the only things about the show that are changing in its new season. When Season 2 originally aired on BBC Two, it occupied a new time slot, according to the network. And instead of 12 episodes per Season 1, fans will enjoy a 14 episode run in Season 2.

“The Big Family Cooking Showdown is a celebration of the role of mealtimes in family lives across the UK and I am so pleased we are bringing it back to the channel," BBC Two Controller Patrick Holland said in a statement. "The new timeslot and changes to the format means we will be a welcoming a new team, Angellica and Tommy, to take the helm."

This season, there are 16 teams competing for the grand prize, and they all seem incredibly charming and talented. They're each teams of three, and of course, they're family in some way — matching pastel-colored aprons and all.

Regardless of the logistical changes, Cooking Showdown remains the same at its core — a feel-good show about family bonding, good sportsmanship, learning, and home-cooked meals. Like Bake Off, it's a joy to watch while winding down for the day, which should be a legitimate enough reason to keep the show in production forever. Don't you agree?

More like this
Laura Tott From 'First Dates' Married Her Long-Term Mystery Boyfriend
By Darshita Goyal
Move Over, 'Sunset'! The Drama-Filled Trailer For 'Selling The OC' Is Here
By Nola Ojomu
This 'Bridgerton' Polin x 'Love Island' Crossover Is Everything
By Darshita Goyal
The Love Island 2022 Reunion Drama, Explained
By Sophie McEvoy
Get Even More From Bustle — Sign Up For The Newsletter