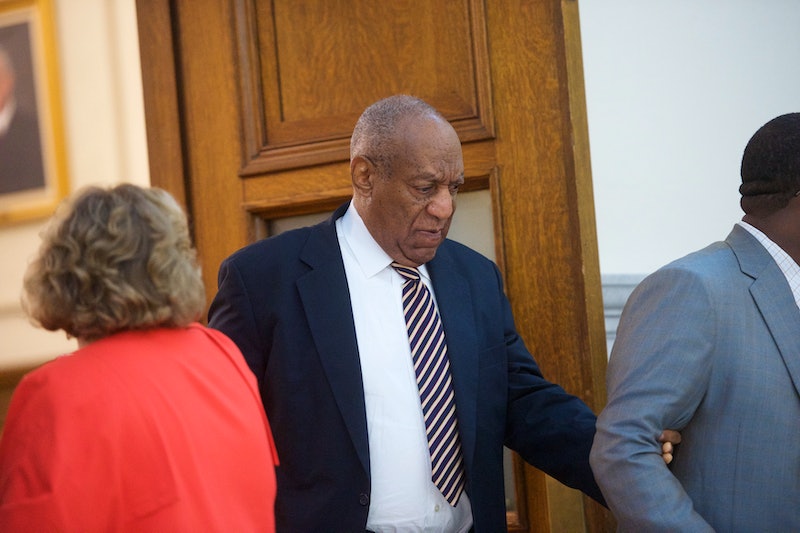 On Saturday, the judge in the Bill Cosby sexual assault trial declared a mistrial after jurors decided they could not come to a consensus on the charges, consequently granting the defense's request for a retrial. The decision comes after Judge Steven O’Neill had instructed the deadlocked jury to deliberate further on Thursday.

District Attorney Kevin Steele announced immediately after the decision that he will retry Cosby.

After six days of deliberations, the jury asked to hear further testimony on Friday. According to ABC News, the jurors reheard testimony from Andrea Constand and her mother about phone calls with Cosby shortly after taking their lunch break. O'Neill rejected two mistrial motions within the first three hours of proceedings on Friday morning, and he told lead defense attorney Brian McMonagle that he could not interrupt the jurors while they were actively deliberating.

“I have no ability to do anything other than what I have done in this case,” O’Neill said. He also pointed out that he had not gotten the impression that the jury wasn't making progress in its deliberations. He did tell McMonagle, however, that he "intends to act" if the jury came back yet again without a consensus.

Shortly afterward, O'Neill was forced to make good on his word. The jury remained hung after a sixth day of deliberations, and O'Neill finally granted the defense's request for a mistrial. According to USA Today, earlier in the day when he rejected earlier motions for mistrial, O'Neill warned Cosby that he could not argue a double jeopardy defense in a retrial if a later motion for mistrial was accepted. Now that the current trial has been declared a mistrial, Cosby will have to keep this in mind.

The comedian seemed to have been hoping for a mistrial, and he has now gotten his wish. Following Thursday's deliberations, his spokesman Andrew Wyatt said that Cosby's team was hoping O'Neill would accept the jury's claims of deadlock.

“We’re in the 40th hour and we can only imagine the emotional and physical toll this has taken on the jurors," Wyatt said, "and we’re just hoping that the judge, if they don’t have a verdict by now, he would release them, and just say that this thing is a deadlock."

A Cosby spokesman also told The Philadelphia Inquirer that a deadlock would essentially be a "win" for Cosby.

It took 18 months for the aggravated indecent assault charges against Cosby (allegations he denies) to be brought to a trial. Now that it has been declared a mistrial, the case will take even longer, and the retrial, should it happen, could likely be just as long — and just as demanding.