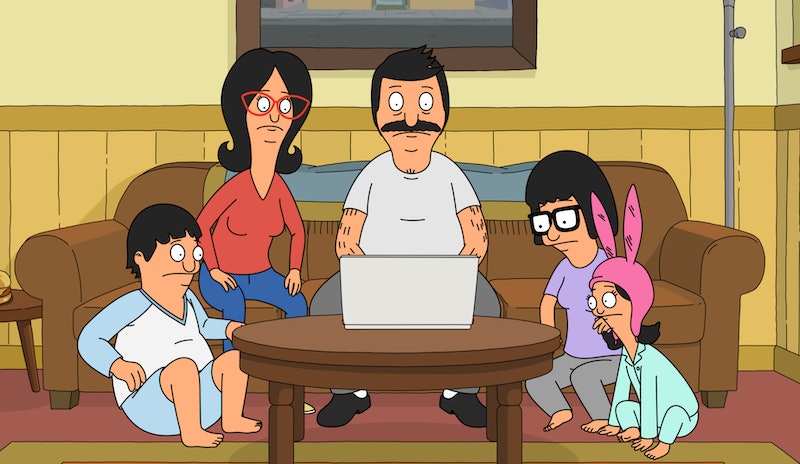 Ahead of its Season 10 finale on Sunday, May 17, Deadline has announced that Bob's Burgers will return for Season 11. Although the animated series has been running for nine years, it doesn't seem like the lovably gruff Bob Belcher is closing up shop anytime soon. In fact, production on Season 11 has already started, per the same article. "Bob's Burgers is going to be on Fox for a long time," Fox Entertainment president Michael Thorn told Deadline in January.

And while there's no set premiere date, Bob's Burgers typically premieres in the fall every year, so it stands to reason that Season 11 will start in either September or October 2020.

Originally, 2020 was going to be a big year for the Fox animated series. Not only will Season 11 mark the show's 200th episode, but Bob's Burgers: The Movie was initially set to premiere on July 17, 2020, according to IndieWire, after first being announced in 2017. But due to the coronavirus pandemic, Walt Disney announced on April 3 that the Bob's Burgers movie would be pushed to April 9, 2021.

Fortunately, fans do know a few tidbits about the film to tide them over until next spring. "It's a musical. It's a mystery," Bob's Burgers co-creator Loren Bouchard said of the movie at 2019 Comic-Con, adding that there will be some backstory for everyone's favorite restauranteur.

"I think it's strongly suggested that [Bob's mother] died, and I think that's important to me — and to Bob's character — that she's a bit of a hole in his life," Bouchard told the audience. He added that fans will even learn what's under Louise's beloved bunny ears hat, which she famously never takes off.