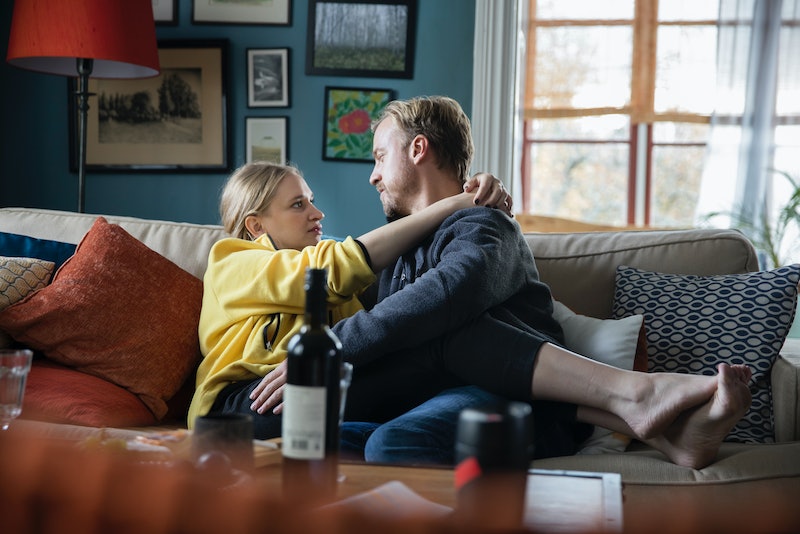 The Swedes already dominate the pop music charts, the cheap home goods market, and now they're taking over our Netflix queues. Bonus Family (or, Bonusfamiljen) is a hit dramedy from Scandinavia that originally aired on the network SVT in Sweden and was later acquired by Netflix for an international audience. Fans can catch the first season (don't worry, there's subtitles!) before its second one premieres on Netflix on Sunday, July 15. So since you're likely already obsessed with it, will Bonus Family return for a third season?

With the popularity of shows like SKAM, the Norwegian show that was recently remade for American audiences, and The Killing, originally a Danish drama that was remade for AMC, Scandinavian television has already made waves in the States. Not to mention the Greg Poehler (yes, that Poehler) vehicle Welcome to Sweden — his short-lived NBC comedy about an American moving overseas with his Nordic girlfriend. Basically, Americans love Scandinavian TV and this show is no different. Given the fact that the Bonus Family has gotten so much positive feedback, including winning TV Drama of the Year at the 2017 Kristallen Awards, it's likely it will have a longer run.

Per Variety, Bonus Family was produced by the Swedish production company FLX and aired on SVT. Pontus Edgren, managing partner at FLX, explained of the show's unique title. He said, "In Sweden, which surely is one of the most politically-correct countries in the world, we don’t say step-dad or step-mom anymore because it has a negative connotation; instead we say 'bonus dad' or 'bonus mom.'"

The first season of Bonus Family followed the aftermath of Lisa (Vera Vitali) and Martin's (Fredrik Hallgren) dramatic divorce. Lisa had fallen love with a schoolteacher named Patrik (Erik Johansson), and they decided to make a go of it, ripping their two families apart in the process. This decision left both of their exes, Martin and Katja (Petra Mede), in the dust and their children in a state of flux. Lisa and Martin have two kids together (Eddie and Bianca) and Patrik and Katja have one son (William). If this sounds very complicated, rest assured that it actually was.

And so, Lisa and Patrik began attempting to raise all three kids under the same roof. However, it didn't go so great: The two boys hated each other, Bianca (Amanda Lindh) was having a rebellious streak, and then Lisa dropped the bombshell that she was pregnant.

All of this resulted in a lot of passive-aggressive banter and therapy, making for absolutely compelling TV. In fact, the pilot opened with the new couple and their exes fighting with each other over a birthday party gone awry. What's more, Martin's mom came out as a lesbian, announcing that her best friend was actually her partner.

As for Bonus Family Season 2, it's filled with as much drama, muted hostility, and heart as its previous installment. The trailer reveals that Lisa and Patrik are finally getting married, which seems to upset everyone around them. Lisa and Martin's son, Eddie (Frank Dorsin), has had a particularly difficult time with his parents' divorce and not handling it very gracefully at all. Patrik and Katja's son, William (Jacob Lundqvist), on the other hand, continue to take everything in stride. Hopefully, the boys will continue to bond and begin to see each other as brothers — they already look like twins, after all.

So when will Bonus Family return for Season 3? FLX announced in August 2017 that they would be producing Season 3, so it's definitely on the way. What's more, according to the site Nordic Drama, they began filming the third season earlier this year, and it will air on Swedish television in January 2019.

Since Season 2 aired on SVT in January 2018, per the Swedish site Gefle Dagblad, there appears to be a delay of about six months for the show to reach Netflix. For this reason, audiences can reasonably expect Bonus Family Season 3 to reach the States in mid-2019. That sounds like a long time away, but you can always brush up on your Swedish before the third installment drops.

More like this
The 'Dead To Me' Creator Says Her Series Finale Idea “Felt Very True To The Show”
By Brad Witter
Here’s Everything Coming To & Leaving Netflix In December
By Jake Viswanath
At 28, Prue Leith Was In A Secret Affair & Sharing Apple Pie With Stoned Neighbors
By Grace Wehniainen
Everything To Know About Meghan & Harry's Netflix Documentary
By Jake Viswanath
Get Even More From Bustle — Sign Up For The Newsletter