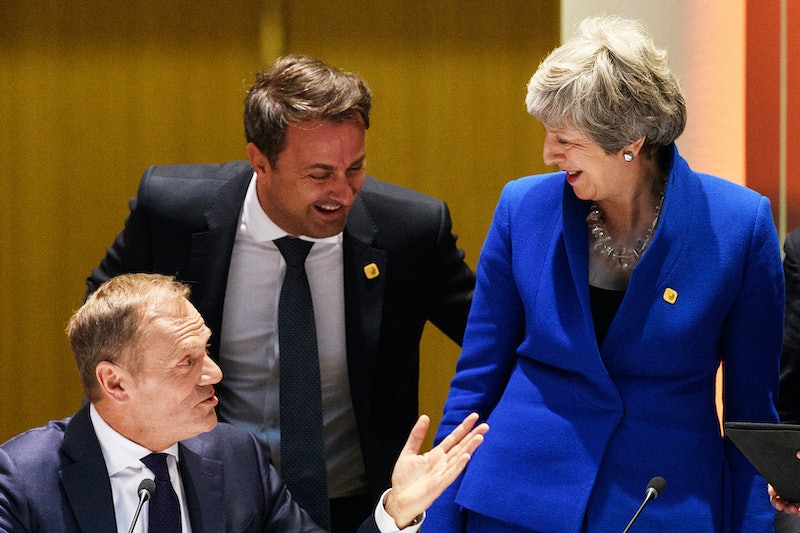 Looks like the UK is in for another six months of limbo as EU leaders have granted an extension for Brexit until October 31, BBC reports. Before you start dreading more months of Brexit drama, the UK can finalise a Brexit agreement at any time during the extension. However this does mean that the next obstacle the country has to face is voting for MPs to represent the UK in the European Union. So will Britain vote in the European election on May 23?

As iNews reports, Theresa May was previously against the UK taking part in these elections and proposed for an exit deal to take place on May 22 but her deal was rejected by MPs three times, which led to the October extension. There's still a possibility that the British Parliament could end up accepting May's deal before the elections take place, but it's pretty unlikely judging by the options that have already been rejected. So it's looking more than likely that Britain will end up taking part in European elections because if the government refuses then the UK will have to leave the EU on June 1 without a deal, as BBC reports.

Obviously it won't be known whether Britain will participate in the European elections until the time actually comes, but it's looking more than likely that the country will, given the raft of options that will become available once new MEPs (Members of European Parliament) are elected and there's a bit more breathing room. According to a handy graphic produced by BBC, these will include the British Parliament accepting May's deal, a full renegotiation, a second referendum, revoking Article 50 and cancelling Brexit all together, a general election, or a no-deal Brexit.

That's all well and good, but if you're not familiar with the European elections, this is probably a lot to take in. As explained on the EU Parliament site, the elections are essentially similar to how MPs are elected in our government under the 2011 Fixed-term Parliaments Act. Every five years, EU citizens vote for who will represent their country in the European Parliament and make their voices heard, with the last vote taking place in 2014. Voting practices vary across the EU, with allocation of seats depending on the size of a country. For example, a smaller country like Malta has six seats whereas a larger country like Germany has 96.

If you're wondering who's currently representing your region the UK in EU Parliament, you can view the list here. The UK has 73 seats available and they are split within 12 regions: Northern Ireland, Scotland, Wales, North West, North East, Yorkshire & Humber, East Midlands, West Midlands, Eastern, South East, South West, and London.

While the UK won't know until nearer the election date as to whether or not the country will be taking part, according to the BBC, parties will have until April 25 to submit their proposed candidates to the elections watchdog. After the elections take place, the newly elected MEPs are "set to reassemble in early July." And as a recent poll conducted by Politico suggests, the Conservative and Labour parties would have a "tight contest" in terms of seats in the EU Parliament in this election, which is similar to the result in 2014. Support for UKIP has gone down significantly, and is likely to "see its support plummet from 27 percent [...] to 10 percent" according to Politico.

Whatever ends up happening, I can't be the only one that will definitely be throwing a party when this whole Brexit debacle is finally over.

More like this
Boris Johnson’s Leadership Is In Question – Again
By Bustle UK
The Families Of Grenfell Tower Are Still Waiting For Justice, Five Years On
By Bustle UK
Windrush Victims Are Still Waiting For Compensation
By Sam Ramsden
5 Concrete Ways To Take Action Against The Rwanda Deportation Plan
By Rachel Mantock
Get The Very Best Of Bustle/UK