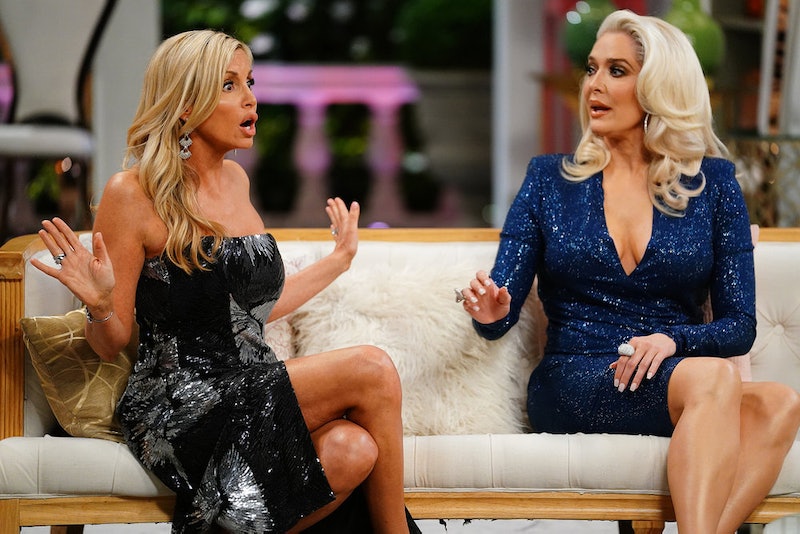 The most-talked-about women during the Real Housewives of Beverly Hills reunion were Lisa Vanderpump, Lucy Lucy Apple Juice, and Camille Grammer. The first two did not show up, obviously, but Camille sure did and she came out guns blazing. Until she unzipped her dress and walked out. Does Camille come back to third part of the RHOBH reunion? Of course, she does. She may be a part-time cast member, but when it comes down to it, she's an OG cast member and she's ready to finish out that reunion.

Yes, she walked out and took her microphone off, but reunion walkouts have become customary in the Real Housewives universe. Ever since Real Housewives of New York City OG cast member Ramona Singer made her mark as the first Housewife to leave the reunion stage, viewers come to expect one every season. In fact, they don't even wonder if a Real Housewife is going to walk out, but instead, think about who's going to do it and why. Basically, it is expected at this point.

Plus, there's just so much more to talk about, especially with Camille. She had some messy storylines with just about everyone this season. And then there's the rest of the cast members, who have a lot of things that they "can't talk about." Sure, a lot of that is for legal reasons, but at this point, it feels like there are more things that the Real Housewives of Beverly Hills stars cannot discuss than the things they will actually talk about.

For anyone whose DVR cut out at the end of the second reunion episode, Camille is a major part of the preview clips for Part 3. In that preview, Camille says to Andy Cohen "I can't figure out what Denise's issue with me is" while she was still backstage. Andy points out, "You just said that you didn't like her and that she's boring."

Eventually, she does get on stage though, of course. And her wedding is a topic of conversation, again. She tells the cast, "It was a great wedding and Teddi said the 'best part of it was the departure.'"

Who knew that Camille and Denise had beef until the second reunion episode, but the tension between them seems to be very thick. Next week, Denise warns, "This is when we think before we speak, Camille." The rookie attempting to school the OG. Wow.

And the clip ends with a crying Camille resting in Lisa Rinna's arms for comfort. Lisa Rinna of all people!? Lisa was the first one to call out Camille for talking out of both sides of her mouth this season, yet she's the one comforting her when it's all said and done. How on earth do they get to that point? Does Rinna just feel empathetic when she sees just how upset Camille is? Do the other ladies go in too hard on her? Are they actually friends now?