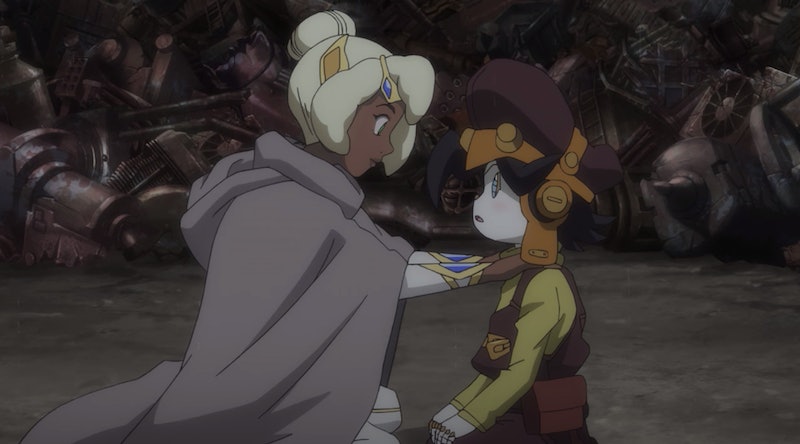 Netflix has yet to announce if Cannon Busters will return for Season 2, but given how far the anime series has come, the fact that the show is being released at all is an accomplishment worth celebrating. Some fans have waiting years to see this day. And though we don't yet know what the show's future holds, for those who just want more of creator Lesean Thomas' work, there is some good news to look forward to.

Cannon Busters is based on a comic book series by Thomas, which, according to Deadline, "follows the adventures of S.A.M, a high-end friendship droid who's joined by a quirky, discarded maintenance robot and a brash, deadly fugitive. Together, the unlikely trio embarks on an unforgettable journey in a fantastic and dangerous world in search of S.A.M's best friend, the heir to a kingdom under siege."

The comic was first published in 2005, but it was short-lived, lasting only a few issues. It was scheduled to continue as a graphic novel in 2009, but that never materialized. Then, in 2014, Thomas launched a Kickstarter to fund an animated pilot for Cannon Busters, which raised over $150,000 dollars. It took quite a while, but five years later, the project has finally come to fruition: now, not only are Cannon Busters fans getting a pilot, they're getting a full season.

Cannon Busters marks Thomas' first major animation project as a creator/writer/director, but he has over 15 years of experience working in animation. After publishing Cannon Busters, he served as a character supervisor and co-director for The Boondocks. After that, he became one of the major creative forces behind Black Dynamite, working on storyboards and character design in addition to directing. Thomas has also worked on beloved Nickelodeon series The Legend Of Korra and various Marvel animated properties, including Guardians Of The Galaxy, Avengers Assemble, and the Spider-Man TV show.

While Thomas has worked on animated projects influenced by anime in the past (namely The Legend Of Korra, Black Dynamite), Cannon Busters seems to be his first full-tilt endeavor into the genre. It draws upon anime tropes like sentient robots, people that have guns for arms, and mysterious figures with excessively spiky hair to craft a Westernized tale of friendship that fits in firmly alongside Netflix's growing roster of anime properties.

And while we don't know yet if Cannon Busters will be back for more episodes, Netflix has already confirmed that Thomas will be producing more anime for the platform. As Newsweek reported in 2018, Thomas' next project for Netflix will be Yasuke, an anime starring Atlanta's Lakeith Stanfield as a legendary warrior in feudal Japan that gets caught in the middle of a conflict involving magic and giant robots. And bonus? Producer Flying Lotus is helming the soundtrack.

So regardless of what happens in the future, fans can take comfort in knowing there is more of Thomas' work coming up soon. Still, fingers crossed Cannon Busters Season 2 is a part of that — and won't take as long to make it to screen as the first time around.