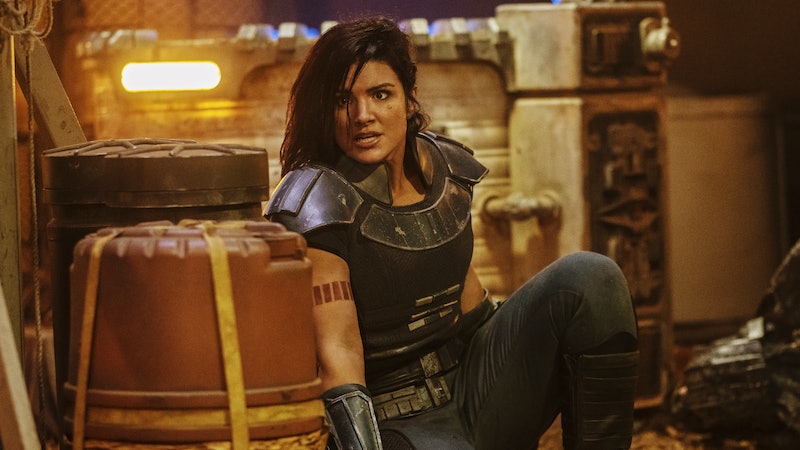 Spoilers ahead for The Mandalorian Episode 4. Mando may like to consider himself a loner, but he certainly is racking up a decent amount of allies these days, the latest of which includes Cara Dune, played by Gina Carano. But while their team up had all the makings of a great partnership, they parted ways by episode's end, leaving viewers to wonder if Cara Dune will ever return on The Mandalorian or if her character is gone for good. Given how well she worked with Mando (and how she saved Baby Yoda's life just in the nick of time), it's hard to believe that her goodbye will last very long.

Carano was billed as a series regular, so the odds of her coming back into the picture are pretty high. Add that to the fact that her IMDb page has her listed as also appearing in Episode 7 and Episode 8 and her return seems all but guaranteed. But as promising as that all looks it isn't an outright guarantee of anything. (Information on IMDb pages should always be taken with a grain of salt.) It's always possible that showrunner Jon Favreau is simply laying the groundwork for the character and plans to extend her storyline in Season 2. When it comes to this show, anything is possible.

For her part, Carano has remained pretty tight-lipped about Cara's role in the first season, apart from her initial run-in with Mando on the remote planet of Sorgan. “It’s a really great first meeting, let’s just say,” she teased to Us Weekly earlier in November. “I think people will truly enjoy their dynamic."

And while she wasn't at liberty to reveal any more details than that, she couldn't help but gush over her helmeted costar. "There isn’t a lot I can say about it, but I can say that working with Pedro Pascal … He’s just an absolute favorite," Carano added. "He really stands out in this quiet confidence that he has on-screen, and when you meet him off-screen, he is so goofy and so fun and has the heart of a child. He’s an incredible actor.”

Considering how well she got to know Pascal on set, odds are they worked with each other for longer than the course of just one episode. Cara's fighting skills alone prove that she'd make for a useful partner in Mando's mission to protect Baby Yoda, so while they may have gone their separate ways for now, it seems inevitable that their paths will cross again. Let's just hope it's sooner rather than later.

More like this
'Stranger Things' Season 4 Volume 2 Trailer Teases New Episodes Coming July 1
By Grace Wehniainen and Gabrielle Bondi
The 'Ms. Marvel' Review Bombing Controversy, Explained
By Radhika Menon
We Finally Know When 'Grey’s Anatomy' Is Coming Back
By Brad Witter
Everything To Know About Obi-Wan Kenobi Season 2
By Kadin Burnett
Get Even More From Bustle — Sign Up For The Newsletter