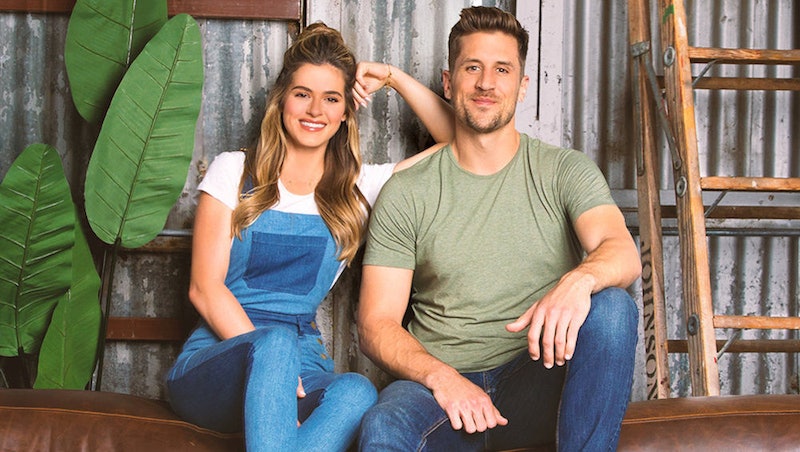 Three years after finding love on The Bachelorette, JoJo Fletcher and Jordan Rodgers have returned to TV. But this time, they're not handing out any roses. Instead, their NBC show Cash Pad follows the two as they renovate other couples' homes to put on Airbnb and make a little extra cash. After eight episodes, its first season is coming to an end, but JoJo and Jordan are totally on board to make Cash Pad Season 2 happen.

"JoJo and I have had so much fun filming Cash Pad and we truly look forward to getting to work together every day," Jordan tells Bustle. "We've worked on some really great projects and it's taught us a lot about teamwork. We'd be thrilled to continue working together in the future."

JoJo and Jordan didn't just stumble into home renovation for Cash Pad. As JoJo told Architectural Digest in 2018, she grew up watching her family renovate their own rental properties. "When I was younger, my mom had an apartment complex that she actually renovated from ground up, and me and my brothers would go in and help her," JoJo said. "So early on, I got a taste of real estate and design. And then, when I was in college, that's when I started becoming hands-on."

On the Cash Pad premiere, JoJo explained she's been renovating properties professionally for years, and at the time had 16 long-term rental spaces. Jordan, who previously played professional football and is now a college football analyst for ESPN/SEC Network, got started in home renovation after meeting JoJo on The Bachelorette. "Jordan actually is the best helper," JoJo told AD. "He comes around when I need him, he gives me advice, and it's fun. It's fun not to have to do it alone anymore."

In the first season of Cash Pad, the duo took on eight renovations across Texas and Arizona. But Jordan said in the premiere that they want to build a "country-wide portfolio" of these short-term renovated rentals, which means that potential future seasons of the show could see them visiting new states. If Cash Pad were to return for Season 2, it could air in July 2020, around the same time Season 1 premiered. But it could also come sooner if the renovation timelines for the projects are short enough.

As long as JoJo and Jordan are on board and fans are tuning in, NBC has little reason to not bring the show back. While you wait for any official news, though, you can always take a trip to visit one of the Cash Pad rentals yourself. Almost all of them are listed on Airbnb and most of them are relatively affordable.

You can stay at the Stonewall Country Cottage from Episode 1 for $155 per night or check out the Austin-based shipping container from Episode 2 for $210 a night. You can also visit the Airstream in Austin from Episode 3 for $205 a night, Episode 4's luxury Dallas warehouse for a pricier $347 a night, or The Granbury on West Pearl from Episode 5 for $298 per night. Over in Arizona, you can stay at the mountain retreat in Prescott, which was featured in Episode 7, for $150 a night. Even the finale episode rental is already available on Airbnb. According to Futon Critic, JoJo and Jordan will renovate a "boho bungalow" in Austin for the finale. You can stay there for $169 a night. The only property not currently listed on Airbnb is the detached garage in Arizona from Episode 6, but that could change down the line.

When JoJo and Jordan aren't renovating for Cash Pad or for their personal rental properties, they're working on their house. In July, JoJo announced on Instagram that she and Jordan had bought their first home in Dallas, Texas. "We are NEW HOMEOWNERS!!!" she wrote in the caption. "Now we get to tackle customizing our very first home together! Bring on the stress of picking more perfect white paints— I CANT WAIT!!"

Aside from that, the duo is planning their wedding, which will happen within the next year. Jordan recently re-proposed to JoJo in August, and she wrote on Instagram that they'll be married by at least August 2020. And Jordan hasn't put football totally behind him: he recently partnered with CheapTickets to help fans everywhere get to the seasons' biggest games.

Jordan also promised on Instagram that they'll be sharing more updates about their house soon, and the two are both active on social media, often sharing glimpses of their day while they work. So whether or not Cash Pad comes back, it sounds like Jordan and JoJo will continue their personal renovation dreams together no matter what.