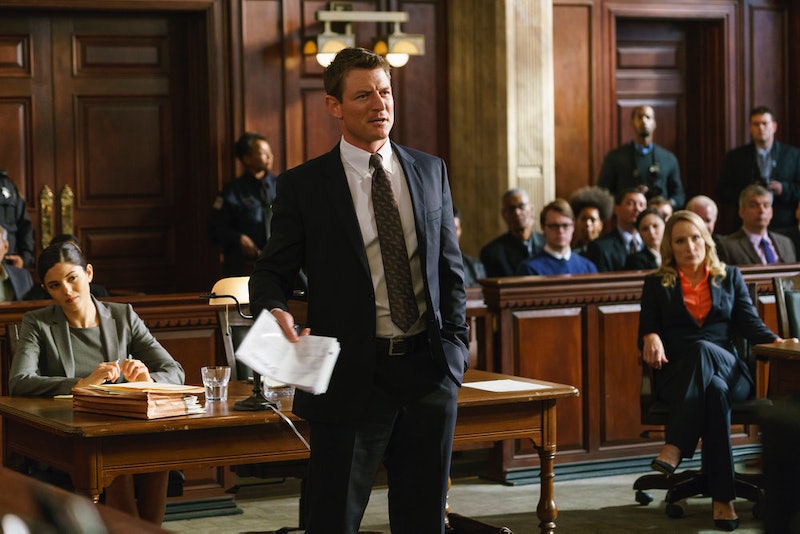 It seems that the city of Chicago is now the key to some of NBC's most recent success. Ever since Chicago Fire debuted in 2012, NBC has added more and more shows to the expanded Chicago universe. So far, Chicago P.D., Chicago Medical, and Chicago Fire have all received additional season orders for 2017-2018, according to Deadline, but will Chicago Justice return for Season 2? It's a little surprising that the network didn't throw in the fourth renewal at the same time.

The first season of Chicago Justice premiered in March and was only a modest thirteen episodes, but if renewed for another season, it could be expanded to more. And if Chicago Justice does return, it could return in the fall, or somewhere around midseason in January, typically the times when network seasons debut. But none of those details will be clear until NBC announces their intentions for next season.

The major justification often given for early cancellations is ratings. The TV landscape has only gotten more and more crowded since Chicago Fire first premiered, so it must be challenging to launch a new spinoff, especially in spring, when fans already have plenty of shows they love populating their schedule.

With that said, TV Series Finale reported that Chicago Justice's Season 1 ratings have hovered around one million key 18-49 viewers, just slightly below Chicago Med's Season 4 ratings, so there's plenty of justification for NBC to decide to renew. But on the off chance that Chicago Justice is delayed or cancelled, surely you'll still get so see some of the characters make cameos on the other Chicago series.

Here's are a few other legal dramas that you may want to check out while waiting to find out about Chicago Justice's future.

This Breaking Bad prequel isn't just a compelling drama about morality and a deep dive into the complex psychology of what seemed like a solely comedic character when he first debuted on AMC years ago. It's also an ode to just how much of the legal profession boils down to paperwork — and yet, with its stylistic montages, it almost makes those countless hours spent poring over documents seems cool.

And another successful spinoff, The Good Fight takes some characters from the long-running drama The Good Wife and recasts them as even more zealous legal professionals led by Diane Lockhart (Christine Baranski).

This series is better know for the cop side of the divide, but it's not Law & Order without, you know, the Law part. I mean, there are more legendary courtroom scenes in the history of SVU than there are on all of the other selected shows combined. If you're in the mood for a bunch of fist-pumping verdict scenes, watch any SVU marathon and cheer.

This is one of the only soapy dramas that stars an Oscar winner, so it should be high on the list of shows to check out, even if it's largely abandoned any pretense of being realistic about the legal system.

This series is still kicking on USA, and its seventh season will debut this summer with a surprising twist that has made a longtime con artist go legit. It's the kind of lighthearted dramedy that more networks should try, and if by chance you've never seen it, there are plenty of episodes to catch up on.

After debuting in 2016, Bull has been renewed for a second season, but it will be changing showrunners in the second season, according to The Hollywood Reporter, so it's possible that this legal drama about a jury expert (a part of the process that TV shows don't pay much attention to) could be totally different when it returns this fall.

So, in the event that Chicago Justice is cancelled, not only do you have several other options for shows about public servants in Chicago, but lots of legal-minded dramas too.

More like this
A New Season Of The Midwich Cuckoos Could Be Coming “To A Town Near You”
By El Hunt
The ‘Love, Victor’ Showrunner Gave Fans Hope For A Possible Spinoff
By Brad Witter
First Kill Left Multiple Cliffhangers To Resolve in A Potential Season 2
By Brad Witter
Peaky Blinders Won’t Return For Season 7 — But A Movie Is In The Works
By Brad Witter
Get Even More From Bustle — Sign Up For The Newsletter