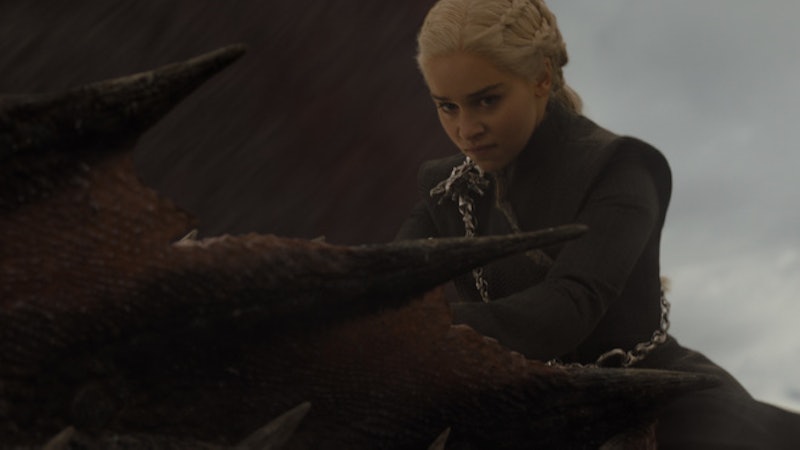 Last week on Episode 4 of Game of Thrones, fans like me were stunned by the scene that took out almost the entirety of the Lannister army. The woman behind all of the rage, fire, and mass casualties? That would be none other than the incomparable Daenerys Targaryen. After learning that Highgarden was sacked by the clever Lannister battalion, Dany hopped on Drogon, took her Dothraki horde and burned almost all of them. Sound familiar? It should, because it is starting to look like Dany will become the Mad Queen on Game of Thrones.

The notion that Dany can be truly ruthless to people who cross her has been made abundantly clear as she has gained more and more power throughout the series. Way back in Season 1, she watched as Viserys, her own brother, was brutally murdered right in front of her. Yeah, he was awful and maybe deserved to be "crowned" with molten gold — but that was only the beginning of her desensitization to brutality. Next in Season 4, she ordered a bunch of slave masters to be literally crucified in Meereen. Again, understandable to some degree. But in this particular instance, even her closest advisors suggested that sometimes it is better to "answer injustice with mercy." Dany quickly responded that she prefers to answer injustice with "justice."

The slippery slope only continued on to Season 6, when she burned all of the Dothraki leaders alive. Yes, this allowed her to gain the loyalty of the Dothraki army and those leaders were the worst, but this whole, "Don't judge me by my pyromaniac father" thing is not going very well when she's doing a lot of the same.

It has been a slow boil, but Dany is increasingly more paranoid and quick-tempered. The beginning of Season 7 really hit this point home when — after hanging with Varys for a while and allowing him to bring Dorne and the Tyrell army onto Dany's side — Dany suddenly, aggressively dressed him down in the war room. To be honest, everything she said was pretty valid. She essentially asked whether his loyalty just lies with whoever picks up the next crown. The problem is, her rage and distrust toward Varys kind of came out of nowhere. Things only got more concerning when she ended their argument with a threat to burn him alive, which sounds a whole lot like another Targaryen once in a position of power. You know, the guy she has been demanding that everyone separate her from even though he is her father? She is sounding more and more like Mad King Aerys Targaryen by the second.

Episode 4 only cemented the idea that Dany is truly slipping into madness. In actuality, she could have just sent the Dothraki army to take care of the Lannisters, right? They would have been caught off guard and the Dothraki can stand on their horses while still riding them — so I feel like they would have been OK on their own. Instead, Dany rode Drogon in there and barbecued the entirety of the Lannister force. How many times have we seen her glance below her and say, "Dracarys" with a glimmer in her eye? It is becoming second nature for her to destroy human beings with fire, without a care in the world.

The preview for the next episode doesn't show Dany dialing back at all. Fans see our Mother of Dragons telling the surviving men that she is not there to murder — but if they don't all bend the knee to her, she will kill them. That seems wildly contradictory and sadly on message for how she has been leading as of late. Even Tyrion looks extremely concerned by her words. Varys is later heard pleading with Tyrion to try to reason with her. When you need to be reasoned with, things are dark.

Although a lot of her actions, even the most brutal ones, have some merit behind their motivations, they are still really concerning for a leader who wants to do things differently than her mad father. It seems like everyone has been banking on Cersei to be the Mad Queen of the series, but Cersei has always just been brutal and awful. You can't really go mad when you were never grounded in reality to begin with, right? Dany, however, has begun an obvious metamorphosis from merciful leader, to ruthless tyrant. Hopefully, she manages to turn this Targaryen madness around or she may be another casualty in the game.