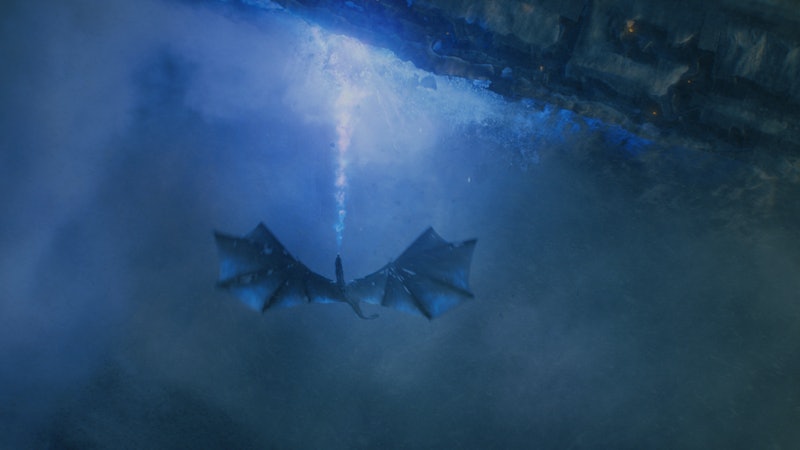 Now that we've all witnessed the firepower of the Night King's fully armed and operational ice dragon on Game of Thrones, stopping Viserion is more of a priority than ever. Daenerys will have to mourn the death of her child a second time, because the structural integrity of Westeros is literally at stake. Perhaps the answer, like many of the family conflicts on the HBO series, is fratricide. Will Daenerys' other dragons kill Viserion on Game of Thrones?

If the ice dragon is a wight, he can be destroyed by fire. Who has fire? Other dragons have fire. And, based on those deteriorating wings he has, he's simply undead, not a white walker — and therefore vulnerable to death by flame.

This theory is also befitting to Viserion's namesake, Viserys, who was also taken down with hot stuff by his own relatives. Rhaegal and Drogon are named after Daenerys' other brother Rhaegar, and her first husband Khal Drogo. Thanks to Rhaegar Targaryen's illicit relationship, Daenerys and Viserys grew up wandering Essos, and a series of fortunate and unfortunate events later, Dany married Drogo.

Then the newlyweds killed Viserys — by dumping molton gold onto his head. Is Viserion the Dragon about to get his own version of the "Golden Crown" in Season 8? The metaphor isn't perfect. If it were, Rhaegal the Dragon would have been the first to perish. Still, it's something to think about.

The dragon may have been turned by the Night King, but Viserys turned against Daenerys himself. Patterns are emerging in the final stretch of Game of Thrones. Characters are both learning from past mistakes and repeating past actions. Baratheons and Starks are teaming up again. Starks and Targaryens are falling in love again. Drogo killed Viserys, and Drogon could kill Viserion.

Will Daenerys' dragons recognize that Viserion has changed, or will they just think that they got their brother back? The inner workings of a dragon's psyche is something that the Game of Thrones writers will really have to take into consideration in Season 8. Killing Viserion is not going to be easy, but if the undead Viserion cannot be tamed or controlled, the two most likely candidates for his ultimate destruction are the dragon's own siblings.