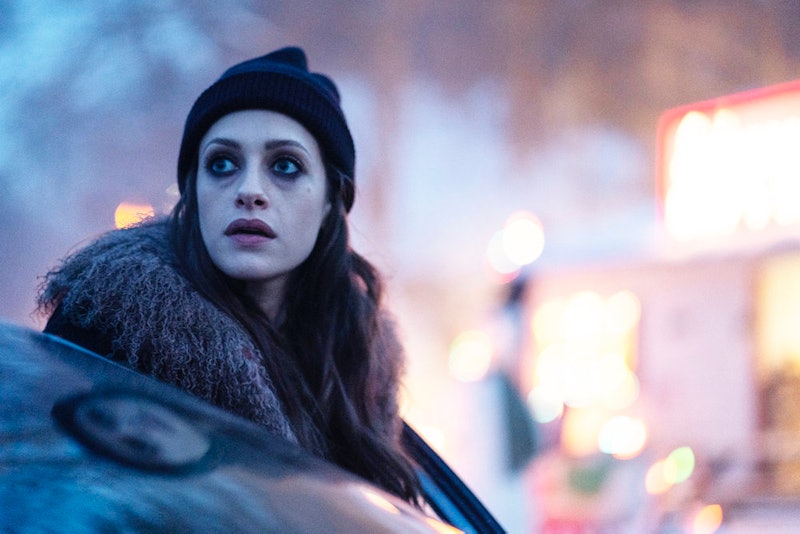 Spoilers ahead for Episode 5 of Mr. Robot Season 4. Viewers have theorized that Darlene will die on Mr. Robot since the beginning of Season 3, but while many major characters have met their fates since then, she's somehow made it out alive. Now, that could all change — in fact, Darlene's death may come at the hands of someone who she has personally hurt in a big way.

After pulling off a Christmas heist at the Virtual Realty server farms in the Nov. 3 episode, Darlene and Elliot manage to escape relatively unscathed — aside from a pretty nasty tumble that the later Alderson takes. Having created enough of a window to get access to the Deus Group's bank accounts, the endeavor appears to be a win until FBI agent-turned-Dark-Army-double-agent Dom gets a new job from her handler: "take care of" Elliot and Darlene. The Dark Army could send anyone to kill the Alderson siblings, so that Dom was chosen is significant: she has a personal connection to Darlene that makes the assignment especially difficult.

Fans will recall that at the end of Season 3, Darlene seduced Dom and slept with her to try and steal her keycard. Dom tried to turn Darlene into her superiors, but a surprise trip to the woods courtesy of the Dark Army ended with Dom's FBI boss being killed, and her being forced to take his spot as a Dark Army mole.

In spite of all that, it doesn't seem like Dom is that bitter: as recently as Episode 4, she masturbated to Darlene's interrogation video, so there are clearly at least some (physical) feelings still lingering. But that doesn't mean she isn't willing to carry out the Dark Army's orders. They've been breaking her down all season, manipulating and controlling her to the point where they even invade her dreams. Forcing Dom to kill the last person who showed her affection could be the final nail in the coffin, turning her fully into a Dark Army-owned vessel of her former self. And there is some evidence that she'll go through with it.

A shot from one of the Mr. Robot Season 4 trailers reveals an upcoming scene in which Dom is standing over Darlene, holding a gun to her head. "You ruined my life," she says, to which Darlene replies, "I can get you out of this." So there's definitely a confrontation coming; it just doesn't show if Dom pulls the trigger.

That Darlene has already survived so much suggests she may make it to the end of the series alive. But Mr. Robot's fourth season has been killing off main characters left and right, including Angela and Tyrell in just the first four episodes. With the Dark Army on her tail, her luck may finally run out.

More like this
The 'Freeridge' Cast Shared Their Hopes For A Potential Season 2
By Grace Wehniainen
Netflix Shut Down 'Bridgerton' S3 Rumours About A “Very Dark” Storyline
By Bustle
Shonda Rhimes Responded To The Surprise Exit Of A Day 1 'Grey's Anatomy' Figure
By Grace Wehniainen
'Succession' Season 4 Will Be An "Absolute Banger" According To Cousin Greg
By Bustle Staff
Get Even More From Bustle — Sign Up For The Newsletter
From hair trends to relationship advice, our daily newsletter has everything you need to sound like a person who’s on TikTok, even if you aren’t.