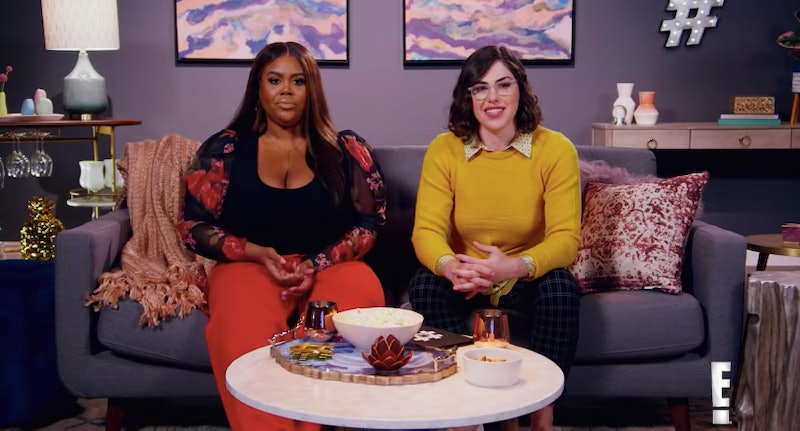 Anyone who's been on an awkward first date knows what it's like to look back and laugh at its cringe-worthy moments. Thanks to E!, there's now a TV show that allows everyone to do the same. Dating #NoFilter premiered on Jan. 21, and over the course of five weeks, a panel of seven comedians offered witty commentary on a slew of blind dates. Some were better than others, but one thing's for sure, a professional funny person's point of view on an already laughable situation makes for good TV, so a Dating #NoFilter Season 2 should be a given.

"Dating in a hashtag world can provide humorous, sometimes outrageous situations, and our comics are ready to bring it," Amy Introcaso-Davis, EVP of Development and Production at E!, said in a statement before the show premiered. "Armed with wine, popcorn, and astute observations, they will offer hilarious commentary as our daters navigate the thrills and awkward drama in their quest for love." And that, they did. The show's official description calls it a "fresh and hilariously honest take on the modern dating scene for the socially savvy, right-swiping generation."

Unfortunately, it has not yet been officially renewed for a second season by the network, but with new reality dating shows like it and Netflix's Dating Around, there's definitely a steady demand. Could it be that regular The Bachelor viewers are getting burnt out on the same storylines and are looking for something more true to life? Possibly — or they could just be looking to add another dating show to their watchlists.

Either way, Dating #NoFilter and its featured comics promise an entertaining half-hour and at least one good laugh. The comics on the panel include Zach Noe Towers, Rocky Dale Davis, Kelsey Darragh, Cara Connors, Ben Bizuneh, Ben Evans, and E!'s own Nina Parker. Most of them are up-and-coming, but you may have seen Darragh on her YouTube channel or in Buzzfeed videos, as she works part-time for the company.

The show has a bit of a Parental Control or Girl Code feel in which the comedians watch the dates happen on a screen of their own, live-stream style, while providing commentary to another camera from the comfort of a big cushy couch. It's not on MTV, but it definitely has a similar vibe to all of its old dating shows.

Despite pending plans for its future, fans seem to be loving the show so far. One Twitter user wrote it should be on "24/7." You hear that, E! network?

Another user called it "wholesome" with "a little sauce," which is pretty accurate. Perhaps next season the comedians could switch things up by watching the dates in person — but that might be taking it too far. As if that line hasn't been crossed already.

While you're waiting to see if the show will return for another season, you can watch or re-watch the first season of Dating #NoFilter on E!'s website, reminisce on your most awkward first date, and laugh.